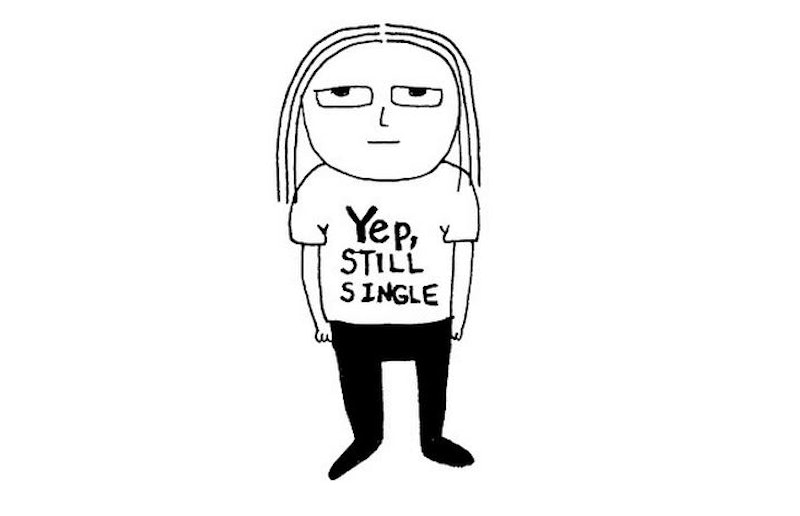 The older I get, the more convinced I become that “being an adult” really just means pretending you know what you’re doing and hoping no one else notices that you really don’t. You definitely notice, though — and that’s one of the many things Mo Welch’s cartoon series “Live from Lombard” taps into. Starring Blair, a depressed not-quite-young adult, but also not-quite-middle-aged adult, with a simple, line-based appearance and a perpetually dour expression, “Live from Lombard” is truthful and hilarious, both of which make it absolutely magnificent.

Welch, a Los Angeles-based comedic performer and writer, first began drawing Blair during a month she spent living at her mother and stepfather’s house in Lombard, Illinois. Following a breakup, she had spent about six months in Los Angeles living with various friends; as she told Hello Giggles, though, “I knew I could just decompress if I could get to Lombard.” It was during a day spent “rummaging through all [her] horrible art” at her mom’s house that she discovered a gigantic sketchpad in the basement — so, she said, “I brought it up to the counter and just started drawing these comics. It was kind of everything I couldn’t say aloud as myself without people thinking I was nuts, so I just threw it on Blair.”

The results are a bleak yet hilarious look at life as a 20- or 30-something, full of those moments where, no matter how seemingly well-adjusted you are, you sit back for a second and think, “What am I doing with myself?” As is the case with Allie Brosh’s Hyperbole and a Half, the effectiveness of Welch’s illustrations hinges on their crudeness — which, as Brosh noted in a 2013 interview with NPR, is a tricky thing to accomplish. It’s not easy to draw badly well. Ultimately, though, the message isn’t one of hopelessness — it’s one of positivity. Said Welch to BuzzFeed last month:

“It’s OK to not have everything figured out. Nobody has it figured out and if they do they are an asshole. It’s OK to eat a Pop Tart for dinner once in a while. It’s OK to watch Nicholas Sparkls movies alone in the theater on opening night. It’s OK to feel or be depressed. I always think of the Frida Kahlo quote that goes as follows: ‘I used to think I was the strangest person in the world but then I thought there are so many people in the world, there must be someone just like me who feels bizarre and flawed in the same ways I do. I would imagine her and imagine that she must be out there thinking of me too. Well, I hope that if you are out there and read this and know that yes, it’s true I’m here, and I’m just as strange as you.’”

This. Yes. So much this.

Here are the 10 cartoons I find to contain "Live from Lombard's" most relatable moments; head on over to Welch’s Instagram or Tumblr for more.

I recently realized that I have reached the point in life at which all of my Facebook friends are having babies. I am (generally) a fully functioning adult who pays her bills on time, does her own taxes, and has somehow successfully managed to maintain a long-term relationship — but I’m not married and I’m definitely not at baby-making stage yet. Sometimes it hard to feel like you’re not lagging behind, even if the milestones you haven’t reached aren’t even necessarily milestones you ever have to reach.

Not that it’s anyone else’s business in the first place, but it can’t hurt to be prepared.

Admit it: We’ve all done this. Probably recently.

True story: I have Googled for such phrases as “people who have bitten other people.” It was for work (for reals), but no one else is going to necessarily know that, now, are they?

I realize bridal showers serve a practical purpose beyond simply being an occasion at which you can actually use every piece of pastel décor you have collected over the course of your life… but, I mean… bridal showers.

Is anyone else really good at procrastinating by doing other things that technically do need doing, even if what you really should be doing is that thing you are not, at this moment, doing? Because I’m a champ at that.

I actually had a viable excuse for not going to my 10-year high school reunion — I was moving from one state to another that weekend, both of which were different than the state in which I went to high school — but even if I hadn’t had that particular excuse, this still sounds like a better time to me.

Life is too short for pretend ice cream. Unless you have a dairy allergy or something.