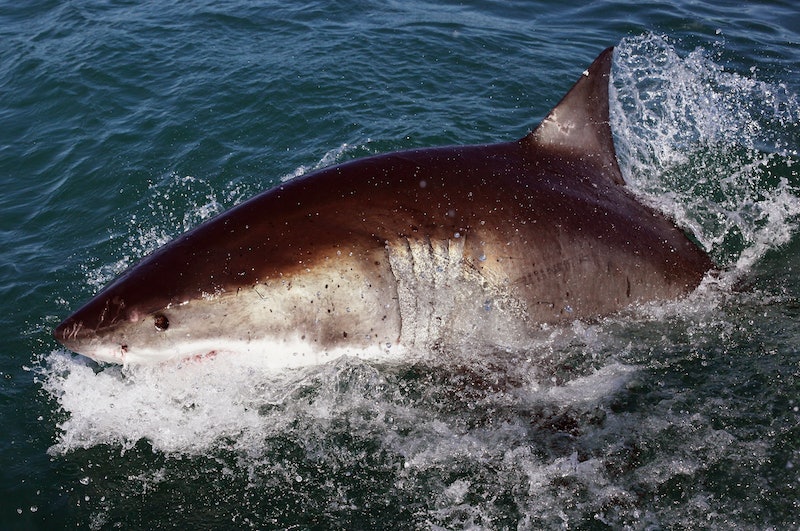 The U.S. Navy has taken its underwater drones to the next level of sneaky — and energy efficient — by making Navy drones look and swim like sharks. Yep, you read that correctly. Known as GhostSwimmers, these new drones measure five feet long, weigh about 100 pounds each, and are designed to look like the Bluefin tuna. Given that dorsal fin, I think we can be forgiven for thinking that the Navy just ordered some mechanized sharks to keep tabs on the world’s oceans.

With this new model, the drone benefits from both the natural camouflage (who would suspect a shark of spying on you?) and the shark’s own energy efficiencies. It turns out that a shark is much better at propelling itself through the water than your run-of-the-mill ship propeller.

In a Navy press release, director of Boston Engineering’s Advanced System Group Michael Rufo — who designed the unmanned underwater vehicles for the Navy — said, “GhostSwimmer will allow the Navy to have success during more types of missions while keeping divers and sailors safe." The drones can operate at depths as shallow as 10 inches and as deep as 300 feet. The Navy did not say a word about whether said GhostSwimmers also sport rows of razor-sharp teeth.

At the moment, the drones are being rolled out slowly. The Navy is using them just to gather environmental data, including information about the tides, ocean currents and weather.

It's only a matter of time before the Navy takes the technology further, says naval analyst Chris Harmer in the same press release.

Anytime you have a new, groundbreaking technology, you’re always going to apply that in a low-risk fashion in order to understand what it can do, Harmer said. As the technology matures, we’re certainly going to use them for reconnaissance, and eventually, we’re going to weaponize them… There isn’t any ground-breaking technology that the military hasn’t found some way to eventually weaponize.

Ah. Yet another thing for the anxious ocean-goer to be nervous about.

But the GhostSwimmer isn’t the only form of underwater drone technology in which the U.S. military has taken an interest. The Navy has also invested in research projects aimed at designing robotic jellyfish that would imitate the sea creature’s efficient movements in ocean currents. The jellyfish are intended for underwater surveillance.

And another project out of the Office for Naval Research is exploring the technological possibilities of borrowing the eel’s undulation techniques in order to create drones that move without leaving a wake.

Of course, as Michael Hay notes over at Vice, the irony behind the Navy’s new interest in the technological innovations of the animal kingdom is how quickly some of our underwater muses are disappearing from the oceans as a result of our overfishing and pollution. A fin for a fin, perhaps?