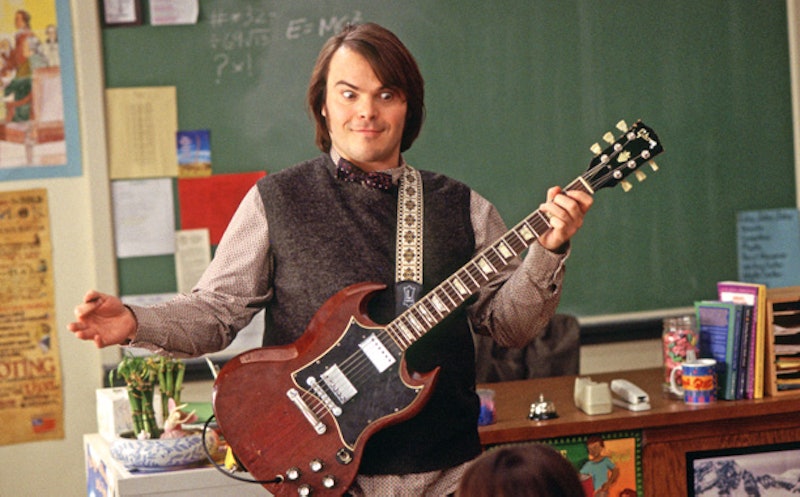 It's time to raise our goblets of rock, people, because School of Rock is headed to Broadway! I know, just when you think life can't get any better, something like this happens. Based on the 2003 film starring Jack Black, School of Rock — The Musical will follow the similar storyline about a wannabe rocker who finds himself teaching at a prep school where he encounters a surprising array of musical talent. The production will make its worldwide debut at New York City's Winter Garden Theatre with previews starting as soon as Nov. 2, 2015. (Right now, Dec. 6 is the tentative opening.)

Thus far, no casting has been announced, however, all of the music (some of which will consist of completely new songs) will be composed by the likes of Broadway genius Andrew Lloyd Webber, so that in itself proves this project is going to be pretty hardcore. So in honor of Dewey Finn & Co. heading to the Great White Way, I thought it would be fun to look back on the movie for old times' sake. Which is when I realized that, aside from just being downright hilarious, there are actually a ton of great life lessons School of Rock provided us with throughout the years. Such as…

Always Put Your Money Where Your Mouth Is

In life, don't just say you're going to do something. Instead you go out there and you actually do it. Regardless of what anyone thinks. You do you, people. You do you.

Impart Your Wisdom to Others

Your time on Earth is a series of trial and errors. So when you can, pass on everything that you've experienced in the hopes of helping others to achieve your current state of enlightenment.

Be Comfortable in Your Own Skin

Don't try to conform yourself into what you think society deems acceptable. You are beautiful both inside and out. Rock that knowledge and don't let anyone ever tell you otherwise.

Attention to Detail Is Key

As the saying goes, the devil is in the details, so you gotta pay attention and know who both your friends and enemies are at all times.

It's OK to Speak Your Mind

Vocalizing your opinions can be very cathartic at times. But just like anything else, make sure not to go too overboard.

Give Into Your Passions

Some might say I have an unhealthy obsession with my Netflix account, but am I sorry about it? Absolutely not! I fully embrace my love of movies and television, leaving me with no regrets. (Just in need of some serious prescription lenses.)

You're only given one life, so you might as well make the most of it and have some fun!

Authority Can Be Overrated

Sometimes the rules were just meant to be broken. Which is why you've got to…

Stick It To the Man