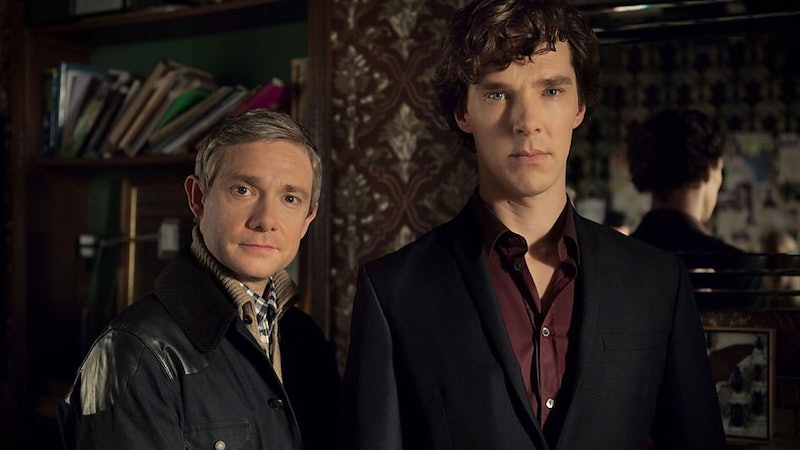 It's been said a billion times yet it never stops being true: waiting for a Sherlock to return date sucks. It's gotten to the point where I actually get angry at people when they complain about having to wait four or five months for their favorite show to return. It's like dude, you have no idea what I am enduring over here! Four months? Try TWO YEARS! Then get back to me with your complaints. I guess what I'm trying to say here is that when it comes to being a fan of Sherlock , patience is key. And unfortunately it's an attribute that will continue to put viewers to the test for quite some time still because the Sherlock Season 4 premiere date is at least another full year away. (Groan.)

After all, production on even just the Sherlock one-off special isn't scheduled to begin until January 2015, which means Season 4 wouldn't start filming until sometime after that. And, of course, even when the episodes do eventually air, it'll happen in England first before the series gradually making its way over to PBS. (Anyone else seriously considering a move to Great Britain? Call me!)

As of now, no official premiere date has been confirmed for either the special or fourth season. However, if I had to venture a guess, I'd say the special will debut sometime around Christmas in 2015 (very similar to last year when BBC released a seven-minute mini-episode "Many Happy Returns"). Then, much like last time, Season 4 will probably commence sometime in mid-January 2016.

I know, I know. I'm frustrated too. But given how popular both stars Benedict Cumberbatch and Martin Freeman are these days, it's really not so surprising. In fact — even though I'm very happy for them — whenever I hear either of them has been cast in a new project, I secretly cringe because I know it could end up delaying Sherlock even more than it already is. (I've got my eye on you Doctor Strange !) So we just have to try and make the best out of this situation. With that in mind, I thought I would compile a few reminders as to why this show is well worth the wait. Enjoy!

I have witnessed many adorable male TV friendships throughout the years, but nothing comes close to the incredible bond that these two share. It's heartbreaking and heartwarming all at the same time. And don't even get me started on all the Rated R fanfiction floating around out there. Consider all of us officially obsessed.

I'm not entirely sure look he's attempting to go for here, but I do know that no one could pull this off other than Martin Freeman. Bless you, my dear fellow. Bless you.

All of the Exciting Cases

Nothing like a good life or death situation to get the old blood pumping.

The Genius Use of Scarves

I realize this move probably wasn't meant to be so seductive, but DAMN. More please!

This Glorious Specimen of a Man

And, Of Course, the Promise of What's to Come