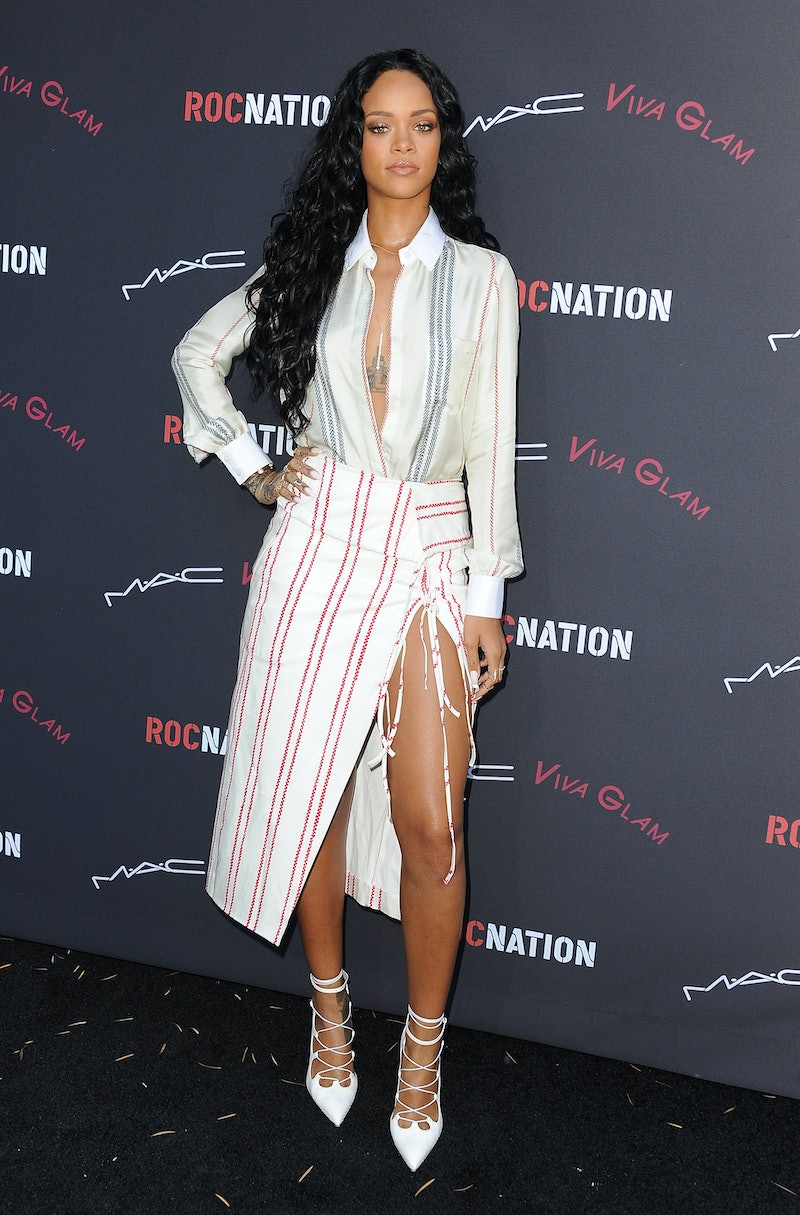 Well, it doesn't seem as though we'll be getting a new Rihanna album this year (bummer), but the 26-year-old pop superstar is definitely up to something at the moment. On Thursday, Rihanna unexpectedly met up with a big group of fans in Paris — but no one is quite sure why yet. Could she have been filming a new music video, perhaps? Hmm, there were cameras everywhere... Apparently, Rihanna lovers were alerted to the mysterious event on Thursday afternoon when a well-known fan account on Twitter told them to go to a location near the Eiffel Tower in order to "experience" R8 with the singer (fans are calling Rih's upcoming eighth studio album as "R8" until the real title is announced). Soon after, the hashtag "#R8Experience" began trending worldwide.

In one video from the evening, Rihanna runs down the street wearing a bizarre-looking white jumpsuit and collides with a pack of screaming fans. Later, the "Diamonds" hit-maker is seen sitting on someone's shoulders in a large crowd while loud music plays in the background. The whole affair appears to have been very chaotic. People were losing their minds — and I don't blame them! They were in the presence of greatness. Check out all of the mayhem below.

You can hear the song that's playing in the background pretty clearly in these next two clips:

It sounds epic, if you ask me. Music producer Mitus took to Twitter on Thursday to reveal that he produced the track. He also hinted that it might be called, "Only If for a Night." Interesting. After the craziness was over, Rihanna wrote on Instagram that she literally "ran off set" at an editorial shoot in order to be with her fans:

Then, she posted this intriguing photo with the caption, "#r8":

OK, so what exactly was going on here? Was Rihanna filming a new music video in Paris or what? It's totally possible. It's also possible that she was just shooting some sort of promotional spot for her new album. She's plotting something, that's for sure. As much as Rihanna loves her fans, I kind of doubt that her team planned this entire event just so that she could spend some quality time with them. Whatever the footage is for, Rihanna seemed very pleased with how the night went:

More like this
What Is Ariana Grande's Net Worth? When It Comes To Money, She Has No “Problem”
By Hugh McIntyre
Tristan Thompson Plays Drake’s Best Man In A Music Video Wedding With 23 Brides
By Grace Wehniainen
Sadie Sink Would Escape Vecna From 'Stranger Things' With This Taylor Swift Song
By Grace Wehniainen
Zooey Deschanel Can't Be Anyone But Herself
By Samantha Leach
Get Even More From Bustle — Sign Up For The Newsletter