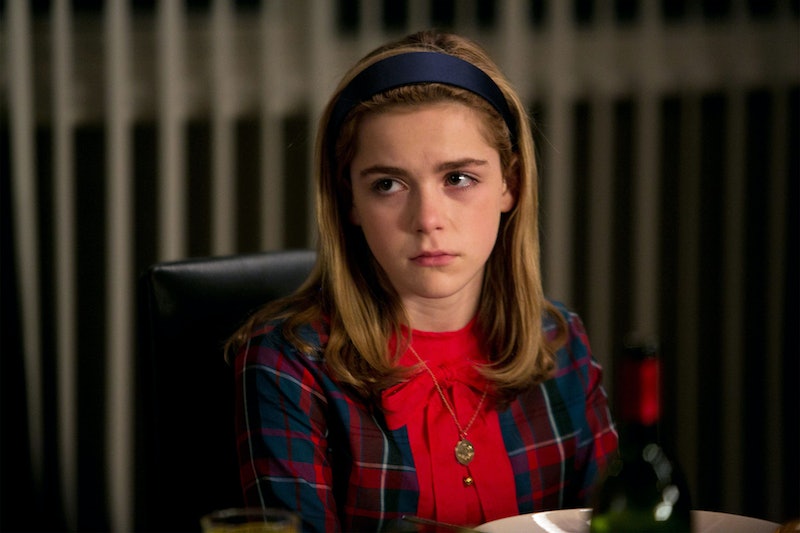 First of all, Kiernan Shipka is growing into a beautiful little lady with bold eyebrows. Second and more important, the whole daddy-issues storyline between Don and Sally Draper is incredible. I can't stress enough how glorious the writing on Mad Men is to me. In last night's episode "The Quality of Mercy," the second-to-last of the sixth season, Sally reaches a head with her tolerance for her father's various forms of impotence and decides to run away to boarding school. "My father has never given me anything," Sally says cynically while she smokes her first (approved) cigarette in the car with her mother. Happy Father's Day from Weiner and co., y'all.

In last week's episode "Favors," Sally walks in on Don and neighbor Sylvia having sex. So sad because obviously Sally's relationship with Betty has always been distant and fraught, making her turn to Don for connection and approval, which he shatters with his pants down. Last week, Sally said to her flirty little friend in the apartment lobby, "I don't live here," and now she really doesn't. I think Sally Draper feels like she's an orphan. Don's pathetic attempt to reconcile later through the closed door of Sally's bedroom just puts the nail in the coffin. "It's complicated," he offers. No shit. Poor Sally — the parent she loved and grasped at desperately is just another disappointment.

Sally's relationship with men is weird. Obviously, she was Don's girl (no longer). But then there's also Glen Bishop, who resurfaced last night when Sally was on her overnight visit to Miss Porter's School for Girls, which apparently Jackie Kennedy attended. I wonder if Jackie O also smoked joints behind closed doors? Sally asks Glen to come with booze in hand to make good with the mean girls she's rooming with. He brings drinks and joints and his weird buddy Rolo, who puts the moves on Sally. She resists! But the entire Internet noticed that Sally seemed pretty satisfied when Glen beat the crap out of Rolo for coming on to "like, his sister." Sally is, after all, Betty Draper's daughter, no matter how hard she tries not to be, and I think she's at least subconsciously realizing she can use her looks as currency. It's 1968, man, and whatever power a little lady has, she should harness it.

I don't want Sally to turn into Betty, and I don't think that's where she's going, though obviously she emulates her mother in some ways. Over at Vulture, which is more obsessed with Mad Men than I am, a writer called in a real-life psychiatrist to analyze what may lie ahead for Sally. Maybe she'll be a hippie, maybe not. But it's clear that she's rebelling, and with her coming-of-age during a wild and wacky time in America that's ripe with opportunity to experiment, I feel like Sally is a loose canon that could go in any direction she chooses. "You seem like you like trouble," Sally's mean tween boarding school friend says to her. Maybe this is the first time Sally agrees.

Post Script: My Shakespeare freak tendencies can never let one go. The title of last night's episode comes from Shakespeare's The Merchant of Venice, a play largely about betrayal, forgiveness, and revenge. Portia (a badass lady) notes: "The quality of mercy is not strain'd,/ It droppeth as the gentle rain from heaven/ Upon the place beneath." You can apologize all you want but can't force others to absolve you. People are screwing up left and right on Mad Men and it will be interesting to see who is forgiven and who is not in next week's season finale.