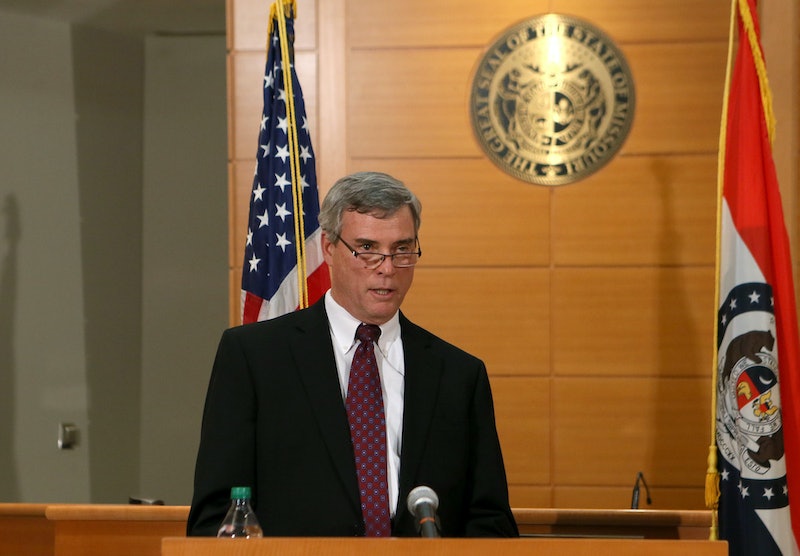 This would've been nice to know sooner. Ever since a St. Louis grand jury declined to indict Ferguson police officer Darren Wilson, for the August shooting death of 18-year-old Michael Brown, a maelstrom of controversy has surrounded the grand jury process itself, and some of its testimonies. In particular, The Smoking Gun released a report on the grand jury's "Witness 40," a woman named Sandra McElroy, throwing the credibility of her account of Brown's death into severe doubt. Now, Ferguson prosecutor Bob McCulloch has admitted a Darren Wilson grand jury witness lied under oath, and his explanation for why he let them testify leaves something to be desired, to say the least.

After all, as potential key witnesses in a grand jury go, the 45-year-old McElroy seems far from ideal. As has been reported by numerous outlets, thanks to The Smoking Gun's reporting, McElroy has an alleged history of racist remarks, once falsely involved herself in another high-profile criminal investigation, and was commenting speculatively about the shooting on social media before she'd even contacted authorities to claim she'd witnessed it. What she ultimately testified to was telling — her story tracked tightly with the pro-Wilson account of the shooting that formulated in the four weeks before she came forward, claiming that Brown was charging at the officer "like a football player, head down" when he was killed.

So, what exactly is McCulloch's explanation for this? You may be surprised by the answer. In an interview with St. Louis-area radio station KTRS, he explained how he decided it was important to "present the entire picture" to the grand jury, regardless of whether or not witnesses were being truthful.

This is a lady who clearly wasn’t present when this occurred, and she recounted this statement that was right out of the newspaper about Wilson’s actions, right down the line, even though I’m sure she was nowhere near the place. There are people who came in and, yes, absolutely lied under oath. Some lied to the FBI – even though they aren’t under oath, that’s another potential federal offense ... it was much more important to present the entire picture.

I'm no lawyer by any stretch, but I think most people are aware of the legal term for lying under oath — perjury, right? In simplest terms, it's mind-boggling to think that McCulloch sent witnesses to the stand with accounts he believed were untrue, and is now so willing to casually admit that. According to The Guardian, his office has no plans to pursue perjury charges against McElroy, in spite of the damning case that's been compiled against her, and his own admission of her story's lack of credibility.

It's yet another fact about this high-profile grand jury process that has left a deeply bitter taste in the mouths of people who were calling for "justice for Mike Brown." Exhaustive reporting has already demonstrated the incredible rarity of grand jury non-indictments, as well as the reluctant, extremely credulous cross-examination of Wilson himself, which didn't really challenge him on any key specifics of his claims.

In short, you can expect to hear more about McElroy's testimony, and McCulloch's willingness to let it go down in the coming weeks. I find it hard to imagine there won't be calls for him to explain this many times over, with myriad nationwide protests against police violence and the justice system still ongoing. In fact, one Missouri state politician is already calling for an investigation into McCulloch's handling of the case.