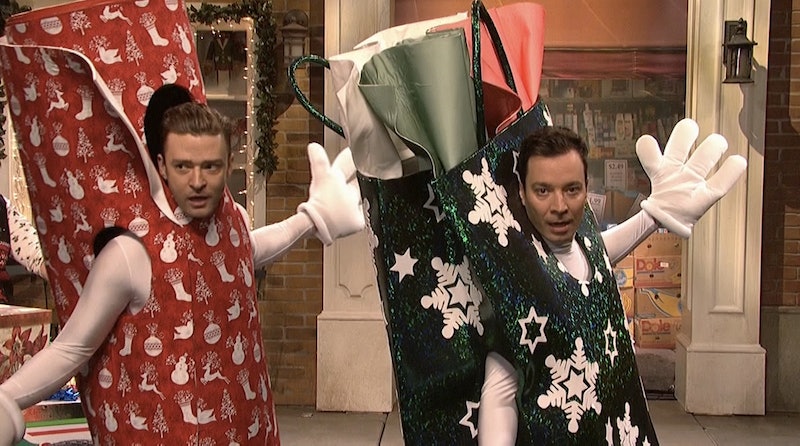 It's hard to find something to watch with your family during Christmas. So many generations and varying taste levels are at play. That's one of the reasons why I find Saturday Night Live Christmas sketches so great. They're funny. They can be heartwarming. You and your family members can fight over which cast members are their favorites. What are your favorite SNL Christmas sketches? Do you like the songs? Are you in it for the scathing social commentary? Whatever it is, Saturday Night Live has got you covered. The show, now in its fortieth anniversary year, has covered the holiday season from every conceivable angle and still manages to find new things to say in their sketches.

Not to mention all of the great Weekend Update characters who have made holiday appearances. Amy Poehler demonstrated everything wrong with "Bop It" (excuse me — "Bump It") toys. Adam Sandler debuted his now famous Chanukah Song on Update. More recently, Drunk Uncle, city correspondent Stefon, 1860s critic Jebidiah Adkinson and Girl You Wish You Hadn't Started A Conversation With At A Party have lent their opinions to the season. The list goes on!

However, when it comes to sketches? Here are what I'll remember as fifteen best Christmas sketches in 40 years of Saturday Night Live.

Don't tell anybody, but I haven't listened to Serial yet. I have it all ready for my holiday traveling! Still, even I can recognize that this parody that aired on SNL over the weekend was absolutely everything and already a classic Christmas sketch.

14. You're A Rat Bastard, Charlie Brown

It's a little high brow, but I love watching the cast have so much fun with these bizarre impressions.

What can I say? Call me a hipster, but I loved these characters back when nobody knew who Kristin Wiig and Jason Sudeikis even were. You look like a rabbit.

The special will most likely air a later iteration of this sketch with Jimmy Fallon and a very enthusiastic audience member. Yes, though Justin Timberlake has only ever hosted this show, he has recurring sketches and characters. I'd like to "give it on up" to the one of the earlier sketches from 2006 with Will Forte.

Just look how happy Gilda Radner is in this clip and try to have a bad day.

Before Digital Shorts, we had animated bits on SNL thanks called Saturday TV Funhouse. One thing that SNL has always been good at is responding to bad times with some much needed laughter. In this Post 9/11 sketch, the Narrator from Rudolph The Red-Nosed Reindeer gives up. With the year we've been having, this is still pretty relevant. Check out the credits — it was written by Louis CK!

Vintage Eddie Murphy is always a plus.

This is a classic, but I have a quota with SNL and dick jokes.

The start of a beautiful friendship.

3. Christmastime For The Jews

It's funny because Rosie O'Donnell really was in Fiddler on the Roof at the time!

The fact that SNL just went all out doing a David Mamet parody on a late night comedy show fills me with Christmas cheer almost as much as Seth Meyers' elf voice.

1. I Wish It Was Christmas Today

This song, you guys. It was performed so many times on the show in so many costumes. Now it's a real Christmas song. Sometimes, the best things on SNL are funny for reasons you can't articulate. Horatio Sanz singing this cheerful song while Jimmy Fallon sort of accompanies him, mostly flops his hair, Chris Kattan holds a keyboard and Tracy Morgan just dances silently? It doesn't get much weirder or better than that.