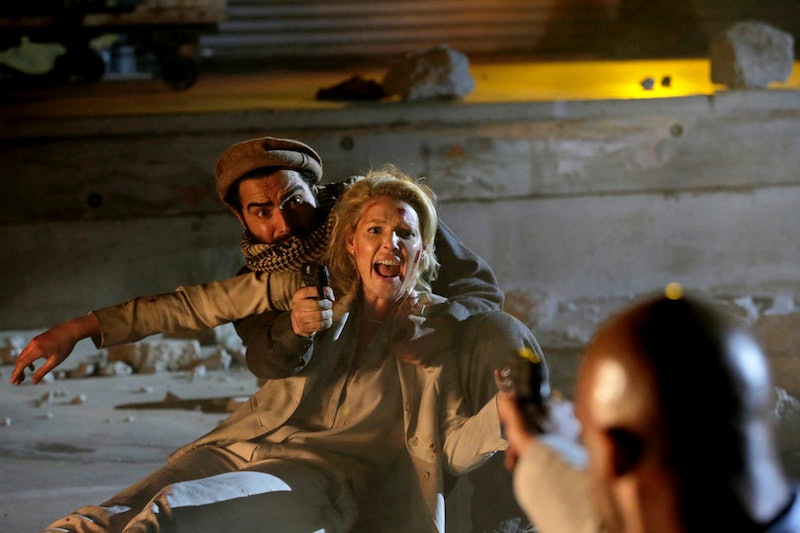 National security is so hot right now on television. There's Homeland, there's Scandal, and, now, there's NBC's State of Affairs. But are all national-security dramas created equal? Is a tense presidential briefing enough to get us addicted to a show? I guess that depends on whether or not State of Affairs, the last entry in the game, does well enough to make this whole White House thing a bona fide trend. And to answer that, we'd have to know whether or not State of Affairs will be renewed for Season 2 on NBC. So what are the odds?

At the halfway mark in the series, NBC hasn't made an official announcement yet, so for now, I'll have to take my best guess about renewal. And, really, it could go either way. Ratings are kind of middling, but they're not terrible. It has a big star in Katherine Heigl, but she also comes with a lot of baggage, having bad-mouthed her previous shows and movies — which is diverting some of the attention away from State of Affairs itself. Then again, people are responding well to Alfre Woodard's performance, so there is a strong, female performance that's being praised and might get people to tune in.

It really is anyone's guess as to whether or not the show is getting renewed, but in the meantime here are a few factors that could push the series one way or another:

State of Affairs took over its time slot from The Blacklist, but it didn't keep all of The Blacklist's viewers. When it premiered, Variety called State of Affairs' ratings "decent but underwhelming," noting that it's "easily the lowest of the five NBC dramas to bow behind The Voice to date." That sounds pretty dire, but even without Blacklist-style numbers, the series is doing okay. Since the premiere, it's averaged a little more than 6.7 million viewers, which is solid if not stellar. It's also a number that seems to have stabilized, so there is a reliable audience for the show.

If the ratings are enough to keep the State of Affairs on the fence, it won't be critics who push it over the finish line. Critics pretty much hated the new show; reviews were almost universally negative. Slate's Willa Paskin wrote that, "while it is completely watchable, it is also, unlike Scandal, not distinctive in any way" (and that was one of the more positive reviews), while Matt Roush of TV Guide called it "a clumsy and unconvincing star vehicle for a miscast Katherine Heigl." Ouch.

A Dearth of Awards

If ratings are low, sometimes a network will keep a show around for prestige if it earns a lot of awards attention. State of Affairs has no nominations, from the Golden Globes or anywhere else. To be fair, it premiered late, in November, so it probably didn't air too many episodes before ballots were due. But without critics' support and only so-so ratings, a high-profile awards nod would've been a big help.

But, What Does NBC Have To Replace It?

More like this
Here’s Everything Coming To & Leaving Netflix In July
By Grace Wehniainen
Paramount+ Wants To Take Over Your Netflix
By Sophie McEvoy
What’s New On Netflix: The Return Of 'The Umbrella Academy'
By Arya Roshanian
These 10 Wild Real Housewives Fights & Moments Are Andy Cohen’s All-Time Faves
By Grace Wehniainen
Get Even More From Bustle — Sign Up For The Newsletter