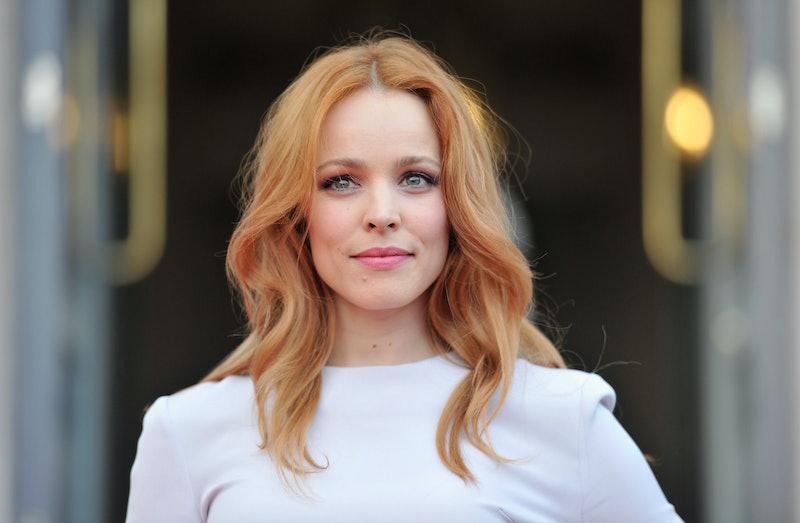 Transformation Tuesday came a little early this week, and I'm now officially convinced that there is no look Rachel McAdams cannot pull off — even when it comes to trends that are on their way out. This weekend, McAdams was seen out and about with a new hairstyle, and although I'm admittedly totally over ombre, I can't deny that she looks fabulous. With a short bob that reaches just above her shoulders, McAdams' new 'do fades from brunette roots to light blonde tips, and she looks amazing.

What's even more impressive is the fact that the only photos out there of her new style aren't high quality — or even times when she was glammed up for an event. Nope, they're from two different airports, which are also known as one of those places where people usually look their worst. There are some paparazzi shots of her walking through LAX on Friday in a scarf, jeans, and cardigan, and then there's this picture I found on Twitter, when McAdams was in the Toronto airport on the same day and stopped for a photo with a pro lacrosse team who just had just landed... and she basically looked flawless without putting any effort into it whatsoever.

After seeing this photo, there is so much I want to say. First: The hair. I love it. Again, not into ombre, but she looks amazing. Second: She's wearing minimal makeup and is at the airport and she looks better than I do when I get up early and actually take the time to bother paying attention to where the eyeliner lands on my eyelids. I don't know if it's killer genes or some secret she has that she's not sharing with the rest of the world or a combination of both, but I'm seriously jealous.

Since starring in Mean Girls, which was most people's first introduction to McAdams, she's sported just about every hair color imaginable — she's gone dark, she's gone ginger, she's gone blonde, she's done random pink streaks. And I've never seen her look less than perfect, regardless of her hair choices. I'm pretty convinced there are only two people in this world capable of such a feat, and the other one is Beyonce.

Rachel McAdams, if you're reading this, I have one thing to ask you: Can you consider teaching classes on having and maintaining incredible hair? I need to learn your magical ways.

More like this
Why Sarah Jessica Parker Wanted Fans To Stop Calling Her Hair Choice “Brave”
By Brad Witter
At 28, Rachel Dratch Was Mingling With Steve Carell & Inhaling Secondhand Smoke
By Samantha Leach
Kylie Jenner Shares A New Photo Of Her Son With Travis Scott For Father's Day
By Jake Viswanath
Prince William & His Kids Are Adorable In A Smiley New Photo For Father’s Day
By Stephanie Topacio Long
Get Even More From Bustle — Sign Up For The Newsletter