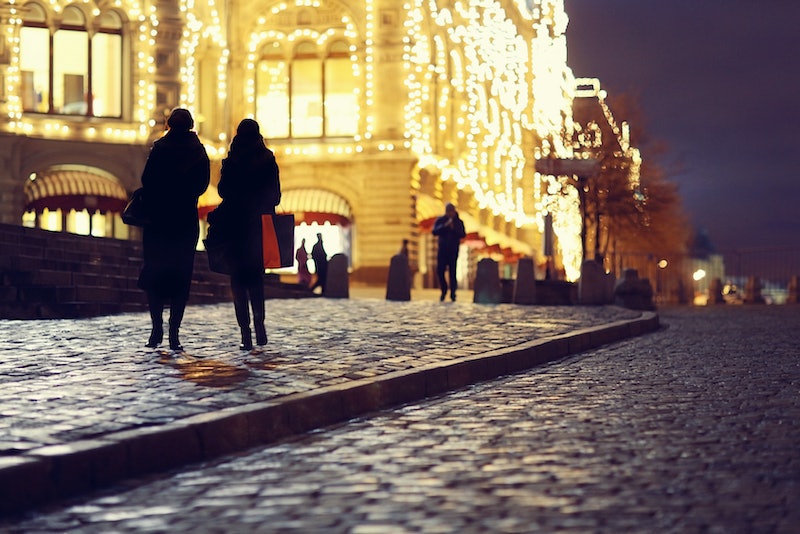 Happy solstice, Bustle readers! As you probably already know, December 21st is the winter solstice. At 5:03 p.m. (Central Standard Time), the northern hemisphere will lean the furthest away from the sun as it does all year which, practically speaking, makes for the shortest day and longest night of the year.

But not, as some believe, the longest night of all time. The Internet was freaking out earlier today when reports surfaced that tonight will in fact be the longest night in the history of the Earth, which is fun to think about, I guess, but not exactly true. Why would we have thought that in the first place? It has something to do with the astronomy of the solstice. Since its birth as a planet, the Earth's rotation has generally been slowing, scientists believe. This slight rotational slowing is mostly caused by the way that the Earth's oceans and the moon exert tidal friction on each other; this tidal friction causes a teensy part of the rotation energy to be transferred into heat on the Earth (i.e., part of the rotation energy is essentially lost), and keeps the Earth from spinning quite as fast as it used to. In fact, the timekeeping Powers That Be have had to add "leap seconds" to our official time here on Earth in order to compensate for this gradual slowing: 25 leap seconds have been added in all, periodically since 1972.

All other things being equal, then, each solstice on a constantly-slowing Earth should theoretically go down as the new "longest night ever." But in reality, intervening factors affect how quickly the Earth rotates, like the speed of surface winds and how the lopsidedness of Earth's oceans causes them to move irregularly. Although the rotation speed of the Earth has slowed over some time periods due to tidal friction, in recent decades the Earth's rotation has sped back up a bit, possibly because the polar ice caps partially melted down and redistributed the Earth's water weight (think of how a top spins differently depending on its shape). So, while tonight will be pretty darn long, the literal longest night ever was probably sometime in the 20th century. I know, I know guys. Science reporting: it's hard!

More like this
6 Organizations Fighting Police Brutality That You Can Support Right Now
By Syeda Khaula Saad and JR Thorpe
Ashamed Of Your Screen Time Stats? Here's How To Change That
By Alexis Morillo
Here’s Your Daily Horoscope For January 27, 2023
By Mecca Woods
These 4 Zodiac Signs Make The Best Bridesmaids
By Nina Kahn
Get Even More From Bustle — Sign Up For The Newsletter
From hair trends to relationship advice, our daily newsletter has everything you need to sound like a person who’s on TikTok, even if you aren’t.