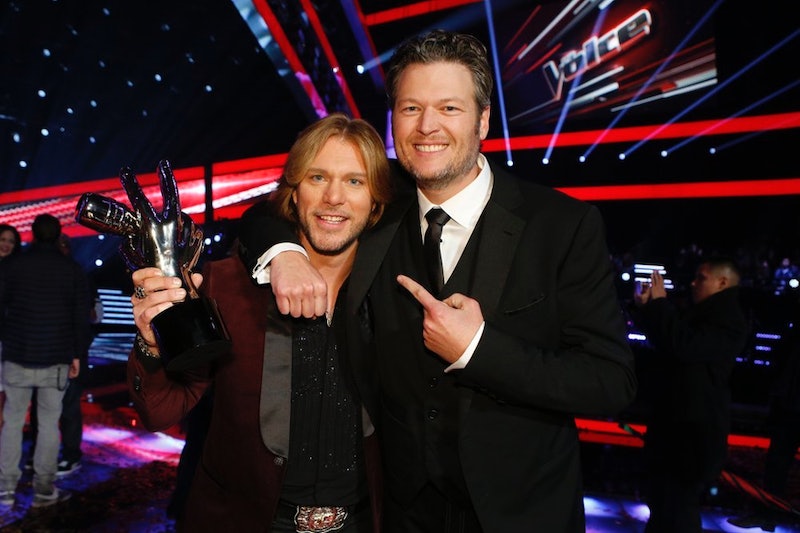 When it came down to final performances on the seventh season of The Voice, Craig Wayne Boyd’s original song “My Baby’s Got a Smile On Her Face” sealed the deal for him. The Team Blake champion inherited the tune from his coach, who had been holding the song in his back pocket for the right moment, and this finale moment was as good as any. The strange part was, when the trophy was handed to him and his family was invited on stage, Craig barely acknowledged the mother of his perfect son. You'd think with those lyrics he'd want to sing them directly to the blonde woman who's been seen holding a very sleepy Jaxon Wayne Boyd through all of the live shows. But the assumption that this woman is Craig Wayne Boyd's wife might be terribly wrong.

Craig Wayne Boyd's son was born in 2012 to Natalie Hoover, who has been nothing but supportive throughout Craig's journey on the Emmy-winning singing competition. She's lovingly admitted on the show that Craig is a positive, forgiving, glass-always-half-full kind of guy and an amazing father — so you can't blame us for assuming they were at least dating. Through my own investigation, I've found that it looks like the longtime couple may have been engaged at one point, but there is no indication that Natalie and Craig are still together.

Playing detective for the moment, I'm going to go ahead and say that all signs point to the couple calling it quits. For one thing, I had to go all the way back to July of 2012 in Craig's Instagram to find even a glimpse of Natalie Hoover — and even this picture is only of Jaxon's birth. You'd think if the attractive Texas-born couple were still together that he'd Instagram her once in a while. This is just not the case.

In fact, looking back at some of Craig's biggest Voice moments, Natalie Hoover didn't exactly have the greatest live reactions. The Voice is one of those shows you watch season after season because of its feel-good moments — most of which come from the families in the audience. This season had several particularly memorable family moments, courtesy of Taylor John Williams' consistently endearing grandmother and Matt McAndrew's surprising his mother at work. But it's very interesting to note that none of these came from Craig's baby mama (for lack of a better term for her at the moment).

I just can't imagine that the two will be able to keep their relationship on hiatus for very long. His long-time on-and-off girlfriend has been a constant in his life through all of the ups and downs — including when he almost quit music out of responsibility to their son. The 35-year-old Voice champion told The Tennessean that he was homeless and sleeping on a friend's couch when he auditioned for the show and it seems Natalie Hoover has remained a believer through it all.

No matter what, Natalie will always be the mother of his son and therefore a part of Craig's life, so who knows? Now that Craig's career is about to sky-rocket, there's no reason to rule out a successful future for this country couple.

More like this
What Is Ariana Grande's Net Worth? When It Comes To Money, She Has No “Problem”
By Hugh McIntyre
Bachelor Nation's Blake Horstmann Is Dating 'Love Is Blind' Star Giannina Gibelli
By Jake Viswanath and Radhika Menon
Tamra Judge & Vicki Gunvalson Gave A Hopeful “Tres Amigas” Update
By Brad Witter
Paapa Essiedu Likes To Keep His Relationship Pretty Private
By Maxine Harrison
Get Even More From Bustle — Sign Up For The Newsletter