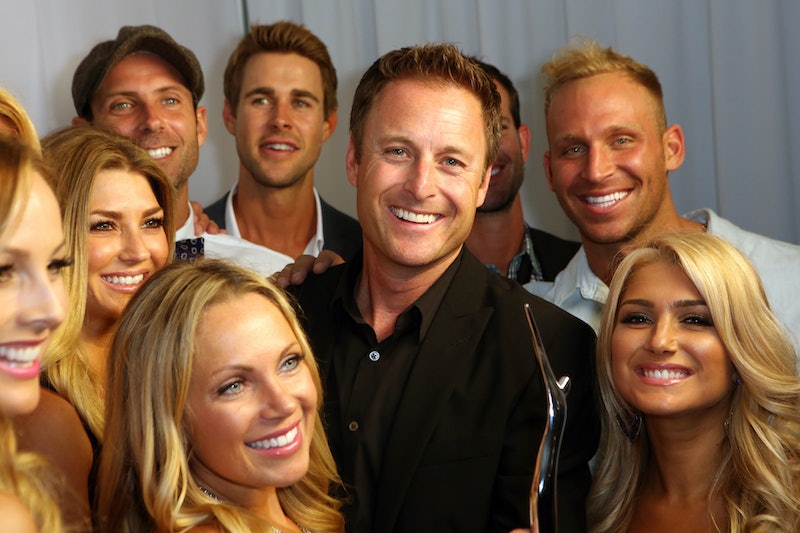 Forget Christmas, Hanukkah, New Year's Eve, et cetera; it's almost Bachelor time of year again, where teary women stand alone on beaches, "dates" consist of sitting at a single candlelit table and eating one bite of shrimp, and Chris Harrison is the wisest man around. But with all this action, you have to wonder, how many Season 19 episodes of The Bachelor are there to look forward to?

While the date of the finale hasn't been released by ABC yet, we can expect about 12. This season of The Bachelor is starting out with 30 contestants, just like the past few, so it's safe to assume that there will also be the customary 12-ish episodes of two hours each. Give or take a week where The Bachelor airs two episodes in a row or skips an episode so ABC can air some kind of secret peek into the next Marvel movie, the whole Chris Soules experience should be over in just three short months — just in time for the end of winter!

And there are plenty of things that Bachelor fans already know to expect from each episode. You really can map out a season of this show before it even airs. The only mystery? Which girl will fill which archetype, because episodes on The Bachelor all fall into easily separated categories:

First, there's the premiere. It'll start with 30 women, but somehow Chris will just so happen to find a perfect connection with just the first 22. Those eight dumpees will quickly be forgotten, unless they happen to have really big boobs and seem pretty nice, like Lacy Faddoul from Juan Pablo's season, who went on to "win" Bachelor in Paradise.

Look, women having feelings is not crazy. But women claiming they're falling in love after spending mere minutes with a guy are, if not actually crazy, definitely played up as "crazy" on The Bachelor. And they do not make it hard. These are the ones who read energy auras or talk about how cute their Bachelor babies after talking to the Bach for no more than 15 minutes.

Among these otherwise boring ladies, there will surely be an "unexpected" elimination, perhaps early on, when one girl is perceived to be not taking the competition seriously, or when evidence of a former boyfriend sending illicit text messages comes to light. There's always one (and never ever more than one) lady who just doesn't click with the Bach, and then a few pretty but uninteresting ladies who are (probably) ushered out by the producers.

Here's where the ones Chris really likes will emerge. This one's always about happiness, and chemistry, and all those real things. This is the episode you will try really hard to catch up with on Hulu, but dammit, you keep falling asleep.

Ah, the home visits, trips, and "tell all" episodes: ways for little to no progress to happen in the competition all while drumming bigger hype for the finale full of things we've "never seen before."

And then, two hours of flashbacks, interview footage, and hemming and hawing on a beach before our bachelor finally makes his pick after three months of waiting. Or you could just read Reality Steve's guess and find out now. Your pick!