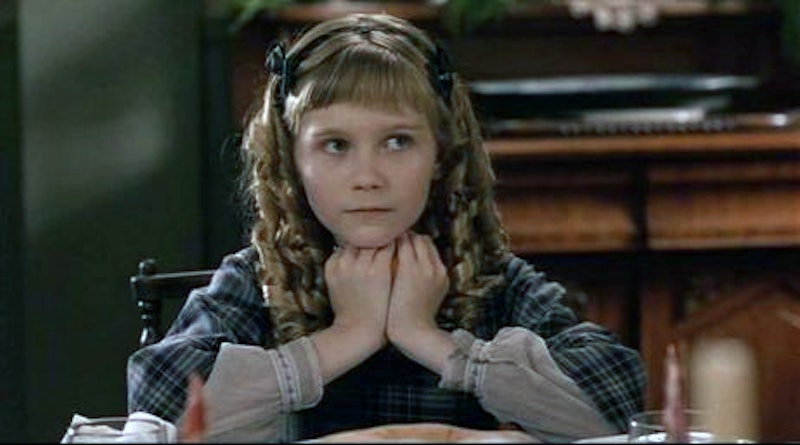 It's officially been 25 years since Little Women — the 1994 version starring Winona Ryder, anyway — hit theaters, and it's still one of my favorite movies. Every time I stayed home sick (or "sick") from school, I'd pop in my copy on VHS and inevitably fall asleep before Amy got in trouble because of the whole stupid limes thing... something that was probably for the best being that it never failed to piss me off royally. Why? Because I'm in the minority who has chosen Amy as their favorite March sister. Don't get me wrong: As a writer, I totally identify with Jo, but Amy and I would probably be soulmates had I lived in the Civl War era. And I don't understand why she gets such a bad rap.

Like anyone else, Amy does have her bitchy moments. That I will admit. But she's a good person at heart, and arguably the sassiest of the Little Women, a trait that she and I would totally share. Although I've never been a youngest child myself, I have spent the past 16 years being an oldest sister, and I understand that birth order syndromes are a totally real thing. Since I've had my own issues with being the oldest, I can totally sympathize that most of Amy's problem was that she was the youngest sister to three extraordinary women, so how could she possibly live up to them? I'd be cranky, too.

And honestly, Amy's not that bad. In fact, she's actually the best character in the movie.

She Was Going Through a Lot

Imagine this: You're just entering your teen years, and your dad is at war, your family is living in poverty, and you have to go without most of the things your friends take for granted. If you've ever gone to middle school, you know it's hard to fit in if you don't have the right clothes. And then there was that time she practically died of frostbite when she fell through the ice, and what about when she was forced to live with Aunt March while Beth was dealing with scarlet fever? If I was dealing with all of that, I would probably be everyone's least favorite sister, too.

She Never Got To Do Anything Fun

While her sisters got to date, go to Annie Moffat's party, and hit the theater with Laurie and Mr. Brooke, Amy had to stay home. Of course, Beth had to stay home, but that was different. She preferred her cats to social events, and if Netflix had existed back then, she would've been all about it. But not Amy. Amy wanted to be part of her sisters' scene, and she never got to go. Being left out all the time sucks.

Okay, so this has nothing to do with Amy's character, but it's still true.

She Was Always Honest About Her Feelings

Unlike stupid Meg, who acted like a "lady" all the time, Amy wasn't afraid to air out her feelings and speak her mind. And back then, that was a rare quality.

And She Had Such Sass

Always with the sass. I love it.

Especially when she grew up to become Adult Amy and got to dress in the gorgeous stuff that Aunt March bought for her. I would totally wear all of her dresses today. And speaking of her crotchety (but rich) relative...

Although she was exceedingly difficult to get along with, Amy managed to figure out a way to get into Aunt March's good graces, and it paid off tenfold. She got to travel the world, be an artist, and live in the lap of luxury just because she was able to deal with a difficult person. I envy that about her, because if I had that ability, my life would be so much easier.

For someone whose parents couldn't afford natural art lessons, Amy is just naturally crazy good at painting. It's easy to forget this, but back then, most if not all women were expected to grow up, get married, have babies, and keep house — and instead, Amy went to Europe to be creative and free. And that was pretty amazing for the time period. Hell, it would be amazing now. Europe ain't cheap.

She Had Laurie on Lock

Christian Bale was so good looking in this movie, and Amy made him fall right into her trap. Okay, so maybe he only fell in love with her because Jo rejected him (and to this day, for the life of me, I cannot understand why), but ultimately they ended up in an adorable relationship that allowed Amy to live her life the way she always wanted to.