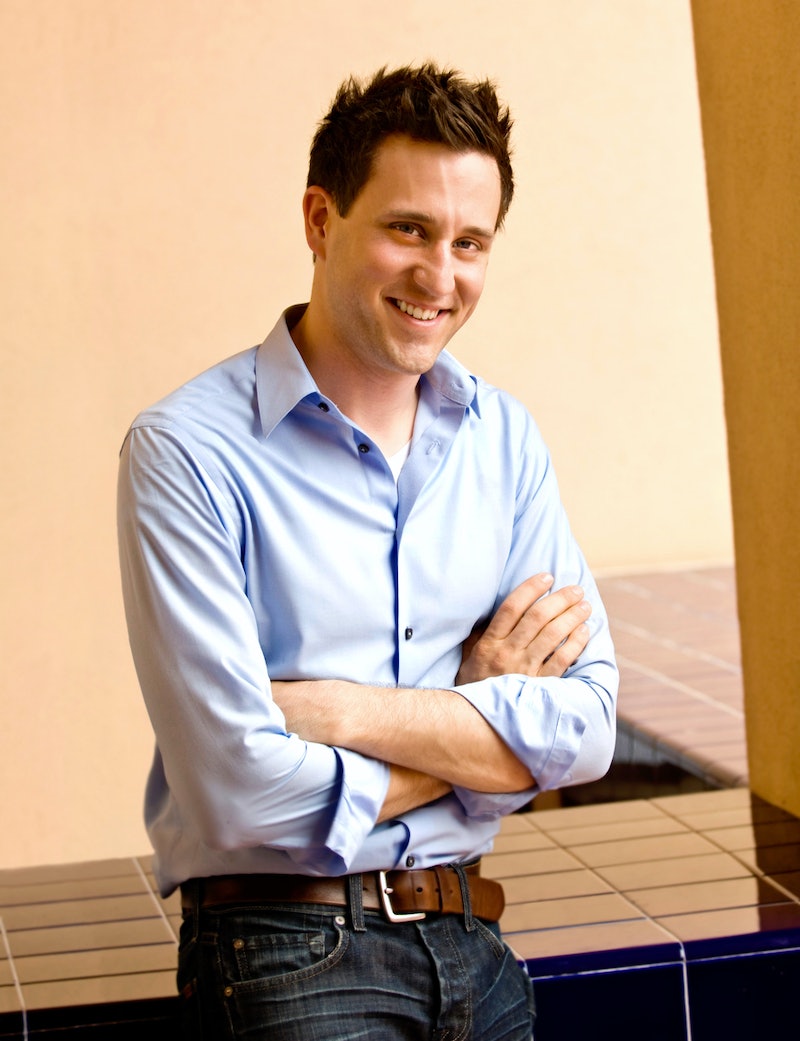 We’d all love to go back and ask the people we dated (or tried to date), “What went wrong?” — and that’s exactly what writer Josh Sundquist did for his new book We Should Hang Out Sometime (Little, Brown Books for Young Readers). The answers he got weren't always encouraging, but they were definitely... enlightening.

Sundquist, a motivational speaker, cancer survivor, and Paralympic ski racer, turned 25 and realized that he’d never actually had a girlfriend — but it wasn’t for lack of trying. He was homeschooled by his strict, religious parents, but as soon as he entered public school as a preteen, Sundquist tried, and failed, to find a girlfriend. Evidently the girls in his town didn’t go for “dorky former homeschoolers with one leg.” He decided to investigate why he was still single and what went wrong, and he tracked down several people he’d tried to date over the years to ask them what happened way back when.

The result is We Should Hang Out Sometime, Sundquist’s funny, charming new book (his memoir Just Don’t Fall was a bestseller) about love, dating, and the embarrassing mistakes he made along the way. “As far as I could tell, the main things girls were looking for in a potential boyfriend were romance and danger,” Sundquist writes about his awkward teenage years. We’ve all been there at some point in life, and the book is a fun read for anyone who has weathered a dating disaster — which, let’s face it, is pretty much everyone.

I spoke to Sundquist about his quest to uncover the mysteries of his dating life, the toughest part about writing his book, and the girl that surprised him the most.

We Should Hang Out Sometime by Josh Sundquist, $10, Amazon

BUSTLE: First things first: What do your parents think of the book, since they're in it? I know some writers talk about the trickiness of turning people they know into characters, so what's your experience with that? Did they give you any feedback?

JOSH SUNDQUIST: With both this book and my first book, Just Don't Fall, my parents feel they come across as ‘weirdos.’ So I always ask them, ‘OK, but did I say anything factually inaccurate about you?’ And they're like, ‘No.’ And then there's an awkward pause. We have that conversation a lot.

I actually made contact with 12 girls, most of them long before I had any plans to write this book. It was just, like, a personal development project. When I did eventually write a book, only six of the girls were included, so half of them (including the first girl I contacted, whom I had tried to date in my mid-20s) didn't actually end up in We Should Hang Out Sometime.

Do you remember when you first got the idea for the book? What was your writing process after that?

I had always thought I had a lot of funny dating stories that might be interesting in book form, but my literary agent advised me that since I had never had a girlfriend, the book's ending would be really depressing. So anyway, after Ashley and I had been together a couple years, my agent was like, ‘Remember that book idea you had? Maybe now's the time.’

At age six I began attempting to sell photocopies of handwritten stories to my friends.

When did you know you could write?

At age six I began attempting to sell photocopies of handwritten stories to my friends. Considering that all the illustrations in We Should Hang Out Sometime are photocopies of my actual handwriting, I guess you could say I'm still doing the same thing today.

What was the toughest part of writing the book? And the most fulfilling?

Both the toughest and the most fulfilling thing was writing the Conclusion section where I attempt to summarize all I've learned from my relationship failures. My editor asked me to re-write it like three times. And I'm glad she did because it forced me to reach a deeper and more honest conclusion about myself and my life.

Who is your ideal audience for the book? What do you hope people get out of it?

I guess anyone who can relate because they've had their own dating disasters, which I think is most everyone. But the thing is, everyone doesn't realize that. People think they're the only one with such horrible luck. Hopefully my book can give them some chuckles and some hope, too.

Since my book is basically about all my mistakes, my advice would be to read it and then do the exact opposite of everything I did.

Of all the women you went back and met with, who surprised you the most?

The last one, Ashley, because she agreed to marry me.

So now that you've delved into your past and you're a champion dater, what's one piece of dating advice you want to share?

Since my book is basically about all my mistakes, my advice would be to read it and then do the exact opposite of everything I did.