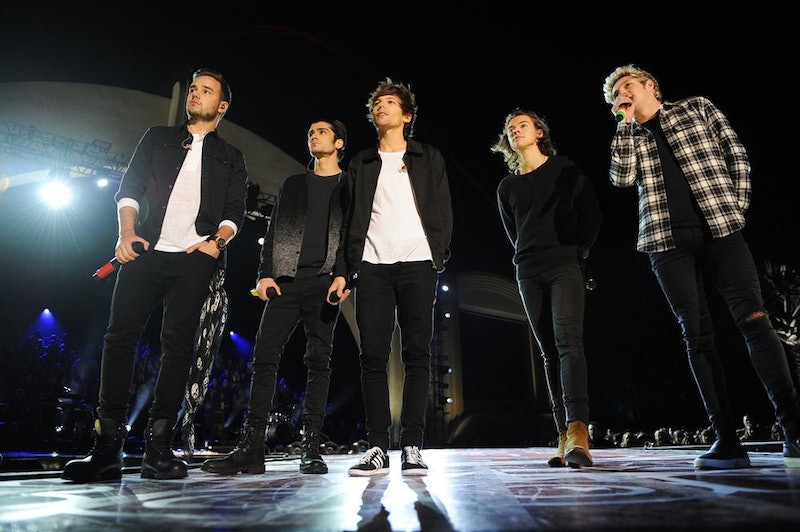 Simon Cowell created a beautiful monster when he oh-so-cleverly put the boys of One Direction together in 2010. Who would have guessed that four years later, the five British-Irish heartthrobs would be such massive stars that they would be made into wax figures at Madame Tussauds New York? Well, now the band is achieving even more milestones because One Direction's brand new album FOUR landed them a spot in history as the first band ever to have their first four albums debut at No. 1 on the Billboard 200. Bandmates Harry Styles, Niall Horan, Zayn Malik, Liam Payne, and Louis Tomlinson should be counting their lucky stars that The X Factor didn't advance them as individuals in the competition, because the five of them clearly belong together.

A year ago, One Direction became the first group to enter the Billboard charts at No. 1 with their first three studio albums — and now they've beaten their own record. If three chart-topping albums was a record already, then four is truly groundbreaking. According to Billboard, the album sold 387,000 copies within the first week of its release, which made it the second largest sales debut of the year, next to Taylor Swift's 1989. These days, getting within the same realm as Taylor's sales is impressive, so the group must be doing something right. If you haven't gotten a chance to hear what I consider to be 1D's best album to date, here is a definitive ranking of the album's 12 songs.

One Direction definitely got on board with the dance-song trend on this one, but I think it might get annoying pretty quickly. It’s only ranked below the "Story of My Life" sound-a-like because, like most fans, I still have "SOML" on replay a year later.

The 1D boys debuted their next single "Ready to Run" on Saturday Night Live and the performance was show-stopping, as usual. But in my opinion it sounds almost exactly like "Story of My Life." Of course, "SOML" is a favorite of mine so I don't mind much — but I can't get it out of my head when I hear this one now. One "Life Story" was enough, thanks.

Not a lot to say here, besides that it's certainly a catchy tune. It's one of the longest songs, but it has a lot of background noise and it's a bit repetitive for my liking. It could definitely grow on me, though.

I love that the album sort of sticks to the theme of the confusion of first love. "Spaces" reminds you of that high school relationship that didn't work out for one reason or another, and all you could think about was which of you would be the last one to drive away.

Like "Fireproof," "Fool's Gold" is slow and soothing and makes the album feel consistent in a way all albums should — like the story is coming full circle. The boys also helped write this one, too, which makes it just that much better.

This one is a bit on the shorter side, but the relaxing melody is everything I love and missed about boy bands. You can hear each of the members' voices separately and yet they still manage to make you swoon over the harmonies during the chorus.

Every fan wants to be the girl in this song. Who wouldn't want to say they were the one to change someone? Especially one of those 1D boys.

Songs about one-sided relationships are always extremely relatable — but they're generally written by females, which is why this one gets such a high rank. The song is obviously catchy, but the tables are also turned here. For once the guy is questioning what the girl wants out of the relationship.

4. "Where Do Broken Hearts Go"

Harry Styles co-wrote this one and so far, it's his masterpiece. More rock n' roll than 1D's usual sound, it isn't surprising that Harry's sexy rasp is the most dominant voice on the record. In my opinion, this tune will reach more people who have known true heartbreak, rather than the ones who swoon over the fantastical relationships the group's singles usually portray. After "18," "WDBHG" should be the album’s final single.

"Steal My Girl" was the first hit off FOUR, but it's also the album's number one feel-good song. This is the song off the new album that you sway to in the car and head-bang to in the shower. It isn't played nearly as often as "Night Changes," but it definitely deserves a high ranking.

Now, usually I'd put this song lower down on a ranking because over-played singles tend not to be the best ones on the album — but I'm just not over this song yet. "Night Changes" is special because it’s a powerful ballad that most of the 1D boys actually helped write.

Nothing can possibly compare to the love you feel when you're 18 and this song perfectly embodies that. It was no surprise to me that Ed Sheeran, the master of power-ballads, co-wrote these euphoric lyrics. Realistically, this should be the next single off of FOUR, but I have no doubt it will be coming through your radio soon enough.

If you want to catch some live performances of these songs, you can catch the boys of One Direction in their first-ever primetime television concert at 8 p.m. on NBC Dec. 23. One Direction: The TV Special is bound to get you in the holiday spirit.

More like this
Harry Styles Helped A Fan Come Out As Gay In Dramatic Fashion At His London Show
By Jake Viswanath
Drake’s Net Worth Will Have Critics Saying “Honestly, Nevermind”
By Hugh McIntyre
Britney Spears’ Honeymoon Plans Include Watching This Movie With Her Husband
By Grace Wehniainen
Rihanna Is America's Youngest Self-Made Woman Billionaire, According To 'Forbes'
By Hugh McIntyre
Get Even More From Bustle — Sign Up For The Newsletter