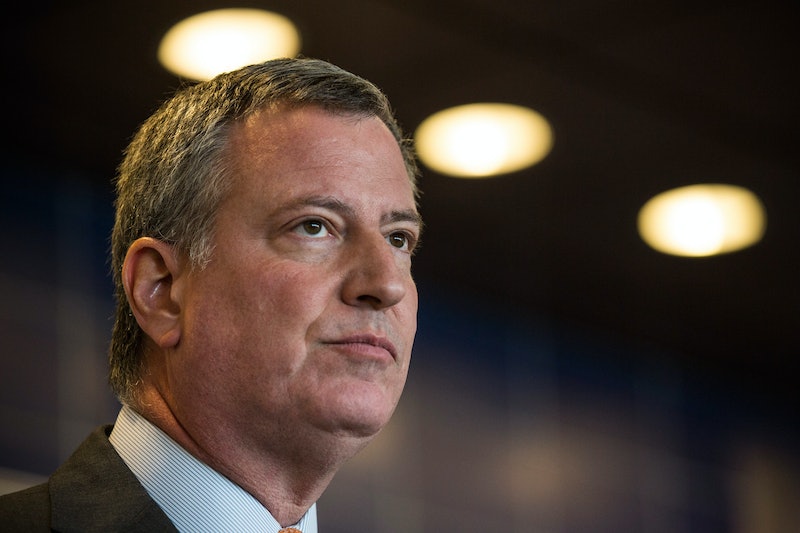 Unrest and hostility lingered in New York City on Monday following the assassination-style killing of two NYPD officers in Brooklyn. As the divide between New York City police officers and residents from marginalized communities increases, perhaps no one is feeling the tension more than Mayor Bill de Blasio, who's now facing calls for resignation from NYPD officers, their families and supporters. Critics of the mayor believe he's been inciting violence against police officers because of his support of the #BlackLivesMatter protests that have been ongoing in New York City since the grand jury decision in the Eric Garner case.

A MoveOn.org petition surfaced on Saturday night, urging de Blasio to resign as a way for the mayor to take "accountability for his action and words." By Monday morning, the petition, which was created by the user "the people of New York," had more than 58,000 signatures.

With the recent news surrounding the NYPD and other law enforcement agencies around the country, our mayor blasted his own police department by throwing them under the bus. His words and actions on the subject matter of late have to be held accountable. He is unfit to lead this city. He is unfit to have a relationship with his police department for his remaining tenure and he should be taken out of office IMMEDIATELY, with proper protocol to be followed to name a replacement before a special election.

New York City police officers have literally turned their backs on de Blasio following Saturday's deadly shooting of officers Rafael Ramos and Wenjian Liu. According to media reports and statements from New York police unions, officers turned away from the mayor on Saturday night when he arrived at Woodhull Hospital to pay his respects to the victims' families.

Now, police unions are using that symbolic gesture to further drive a wedge between the mayor and his city's police department. On Monday, the Sergeants Benevolent Association sent out a series of tweets harshly condemning de Blasio, stating that the Democratic mayor will be "judged in the court of public opinion." SBA President Ed Mullins also appeared on Fox & Friends Monday morning to deliver similar statements.

Following de Blasio's statements in the wake of the non-indictment of police officer Daniel Pantaleo for the chokehold death of 43-year-old Eric Garner, in which the mayor stood by the Garner family and the protesters demonstrating for justice, the SBA circulated a petition barring de Blasio from attending NYPD funerals. The police union gave its officers the option to block de Blasio from their funerals if they died in the line of duty.

However, the family of slain officer Ramos said de Blasio would be welcomed at the officer's funeral, according to The New York Times. "If he wants to come, we’re not going to throw him out," Ramos' cousin, Ronnie Gonzales, told The Times.

Still, the tension between the leader of New York and the city's police force continues to spike, as both the SBA and the Patrolmen's Benevolent Association hurl inciting language at de Blasio. Both Mullins and PBA President Pat Lynch have said that de Blasio has "blood on his hands." In a press conference late on Saturday, Lynch also blamed the #BlackLivesMatter protesters for attempting to "tear down what NYPD officers did every day."

Meanwhile, while speaking on WNYC on Monday, New York Gov. Andrew Cuomo called for a "cooling off period" in America's largest city. “People are angry and agitated right now and there are high emotions," Cuomo said.

The governor added that de Blasio had his full support, and that he wouldn't lay blame on either de Blasio or the New York City police unions.