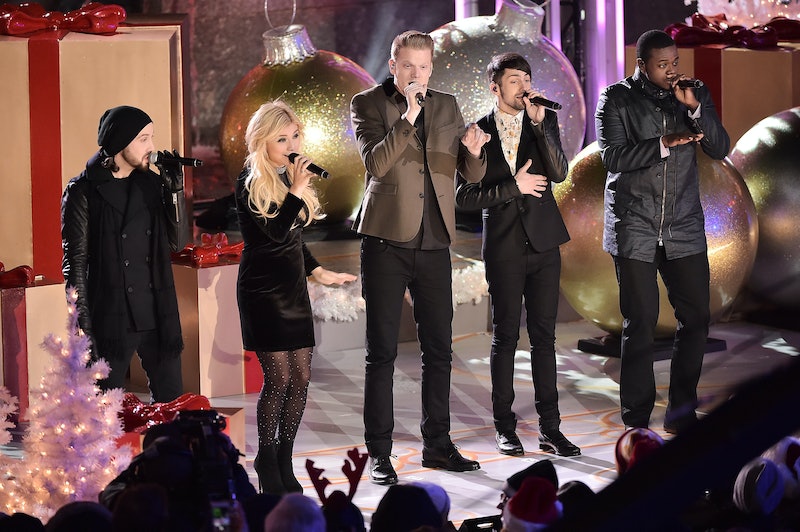 If you love Pitch Perfect and love Christmas music, do I have some good news for you. No, the Pitch Perfect cast didn't release a Christmas album, I would be passed out from that. But Pentatonix, one of the most popular a cappella groups out there, has released a new Christmas album, called That's Christmas to Me, and you should be prepared to have this album playing 24/7. That's Christmas to Me is Pentatonix's second holiday album, the first was PTXmas from 2012, and this time around they've doubled the amount of songs for your holiday listening.

Pentatonix, comprised of Scott Hoying, Mitch Grassi, Kirstie Maldonado, Avi Kaplan, and Kevin Olusola, came to prominence when they won the Sing-Off on NBC in 2011. The group is taking over the a cappella scene. According to Yahoo Music, That's Christmas to Me, is "the highest-charting Christmas album by a group or duo since Mitch Miller & The Gang topped the chart with Holiday Sing Along With Mitch in January 1962."

So how do the songs on the new album rank? I took to the extremely torturous challenge (not) of being curled up in a Snuggie, listening to a cappella Christmas music, while I sipping apple cider, and ranked all of the songs from worst to best. Here is how they ranked.

I don't know if Mary knew, since I didn't get a definite answer from the song, but I didn't know this was a Christmas song. Maybe my ignorance is what made me not love it, because I couldn't sing to it in my head — OK, loud and proud — but this song made me say, "Eh."

Another song I didn't know existed... Am I a bad Christmas goer? This song just wasn't as exciting as the other songs, so it didn't rank very high.

9. "It's the Most Wonderful Time of the Year"

This is a classic cover of the song. They didn't have as much fun with it as I would have liked, but maybe it is because I expect there to be some charisma and fanfare in a cappella because of Pitch Perfect.

Another straight forward cover of the song. I have to note that while some of these might get "straight forward" and "expected," they are all extremely well done. Everyone in the group is an amazing singer, so the songs are all equally amazing.

I was expecting this version to hit a note where it took a turn for something unexpected, but it didn't, really. The harmonies in this version are so well done, though. Just from listening to it, I felt I was floating in a huge mug of hot chocolate, while sitting on top of a marshmallow. Christmas bliss.

This is a holiday lullaby. It's smooth and quiet. I would love listening to this while simultaneously watching the Yule Log burn on my television screen with Lil Bub, obviously.

5. "Dance of the Sugar Plum Fairy"

This song has no lyrics, it is literally just "all from their mouths" (Pitch Perfect shout out). It's so impressive that this is done without instruments, but if you're looking to sing along, this is definitely not one you're going to want to tackle. It would be perfect for a classy Christmas party, not one where you're secretly hoping someone drunkenly belts a Mariah song.

It's a classic song, but has a non-classic twist. When the song turns jazzy, I started clapping and dancing involuntarily. If that doesn't happen to you, you're not doing Christmas right.

3. "Santa Claus is Coming to Town"

This is the fun I want! It's a little hip-hop-y, a lot of fun. This is probably one of the songs I wish I could join Pentatonix on. We would be called Sextonix, because six people...

This song might be everywhere, but who cares. It's catchy, and you love it (or secretly love it). While Idina Menzel/ Adele Dazeem is the forever title holder of the best version, the song works great as a group number.

I didn't know I wanted a "Winter Wonderland" "Don't Worry Be Happy" mash-up before I heard this song, but now I am wondering how I lived this long without one. PLUS: Tori Kelly (if you aren't familiar, I encourage you to search her on YouTube) is a featured singer on this, so you know it is amazing.