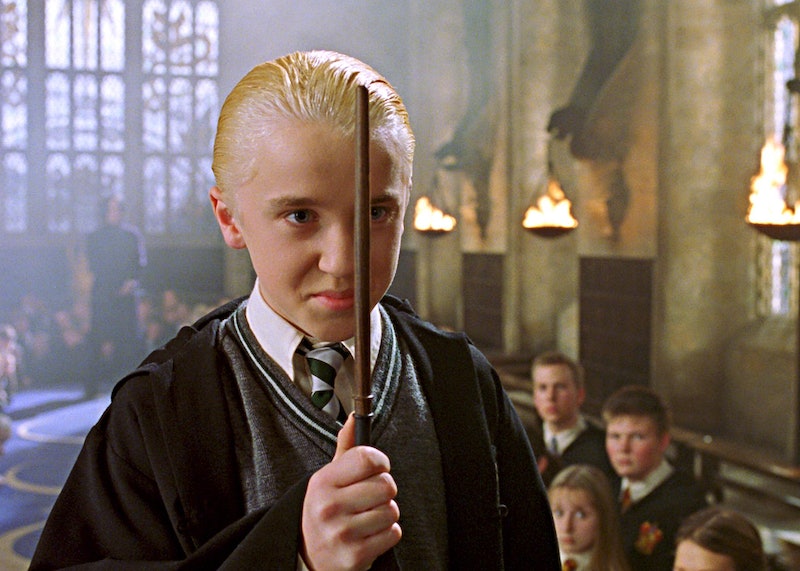 Finally! J.K. Rowling took the opportunity of Pottermore Christmas Day 11 to give us patient fans the backstory of our favorite villainous Hogwarts student: Draco Malfoy. It was rumored to be coming, but it still thrilled readers, so excuse us while we jump up and down. The riddle was a simple one, but we can all forgive Rowling because as we were reading, we saw what the answer was going to be and got too excited to care.

Here's the riddle, so you can get all giddy along with me:

Death Eaters gather on the astronomy towerKeen to rid Dumbledore of his life and power.But which student masterminded this plot with precisionIn order to fulfill the Dark Lord's secret mission?

Finally, we are transported as fast as our fingers can type to the top of that astronomy tower where (book spoilers!) Dumbledore is seen falling (tears), and just as easily as we all solved the riddle, if readers hover their cursor over Draco himself, we can unlock his secret back story. And there is a lot. (!!!) Merry Christmas, indeed.

Draco grew up hearing stories about Harry Potter, aka the Boy Who Lived, and he believed the theory along with his father that Harry survived because he was the new great Dark wizard. So Draco tried to befriend Harry immediately when he arrived at Hogwarts, but it was Harry's refusal to respond to Draco's friendly overtures, out of allegiance to Ron Weasley, that turned Draco against him. Then Draco started to realize that Harry was not going to be the next Voldemort, and his enemy was solidified.

But as Draco aged, Rowling writes, he grew more tolerant. He married the younger sister of a fellow Slytherin, Astoria Greengrass, who went through the same conversion from pure-blood ideals to a more open-minded worldview. Rowling writes:

I pity Draco, just as I feel sorry for Dudley. Being raised by either the Malfoys or the Dursleys would be a very damaging experience, and Draco undergoes dreadful trials as a direct result of his family's misguided principles. However, the Malfoys do have a saving grace: they love each other. Draco is motivated quite as much by fear of something happening to his parents as to himself, while Narcissa risks everything when she lies to Voldemort at the end of Deathly Hallows and tells him that Harry is dead, merely so that she can get to her son.

And in a super-interesting explanation of his name, Rowling reveals why she settled on "Malfoy":

His Christian name comes from a constellation — the dragon — and yet his wand core is of unicorn.This was symbolic. There is, after all — and at the risk of re-kindling unhealthy fantasies — some unextinguished good at the heart of Draco.

This is Rowling's lengthiest Pottermore Christmas writing yet, by far, and as all Harry Potter-lovers know, villain or not, Draco Malfoy deserves it.