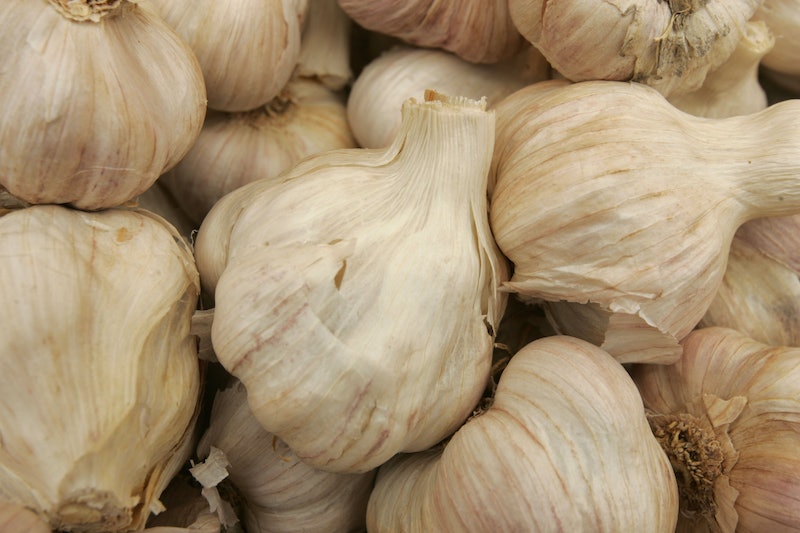 Winter is upon us, and though the season brings many magical things — Gingerbread! Presents! Roaring fireplaces! — it also brings cold and flu season. Nothing mars winter's enjoyment like being a sniffling, coughing mess all the time. But you are in luck, because I happen to be an expert at avoiding winter colds. And fall colds. And colds in general. Once upon a time I used to be that girl who was pretty much sick every third week from October to March; now I'm almost never sick, and I'm going to share my secrets with you.

1. Raw garlic. A few years ago, I watched as a whole bulb of garlic fell out of a friend's purse. "Vampires?" I asked. "Cough," she replied. Instead of taking cough medicine, her go-to remedy was ingesting raw garlic. I love garlic, cooked or raw, so I decided to give it a shot the next time I had a cough. Lo and behold, it seemed to work. Before you start crying 'placebo effect,' consider this: Garlic contains a compound called allicin, which research has shown to work as a natural decongestant. When you crush, cut or chew raw garlic, the allicin gets released, providing a potent natural cold and cough remedy. Because the compound is heat sensitive, cooked garlic doesn't have the same effect.

2. Probiotics. Though probiotics are kind of a health fad these days, you shouldn't hold that against them. "Probiotics" is actually a catch-all term to refer to a host of beneficial bacteria. The antithesis of antibiotics, these good germs boost overall immunity, as well as your immune system's response to influenza. You can find probiotics in supplement form or in foods and drinks (I recommend doubling down on both in the winter). With supplements, look for a brands that contain Bacillus coagulans (BC-30) and/or Lactobacillus GG, recommends Dr. Andrew Weil. Some of the best sources are kombucha tea, raw apple cider vinegar, miso, yogurt, kefir, kimchi and sauerkraut.

3. Raw honey. For easing sore throats and subduing coughs, buckwheat honey may beat Robitussin. In one 2007 study, children and teens with upper respiratory tract infections received either a dose of raw buckwheat honey or over-the-counter cough medicine. The honey helped ease symptoms significantly more than the cough meds did. Manuka honey also has medicinal properties. Fair warning, however: Neither of these taste like conventional honey. To mitigate the stronger, more distinctive taste, try adding them to flavorful tea.

4. Ginseng. The herb ginseng has long been used in traditional medicine. A powerful immune system booster, it can be used to help prevent and treat colds and the flu. There's a plethora of evidence supporting ginseng's usefulness, with studies showing its power to reduce the frequency, severity and duration of common colds. You can find ginseng extract in supplement form, or find it fresh (particularly in Asian markets). I really like this Korean ginseng drink pictured below (don't worry, it tastes better than it looks!).

My secrets, revealed! You can thank me when you make it through the cold weather illness free.