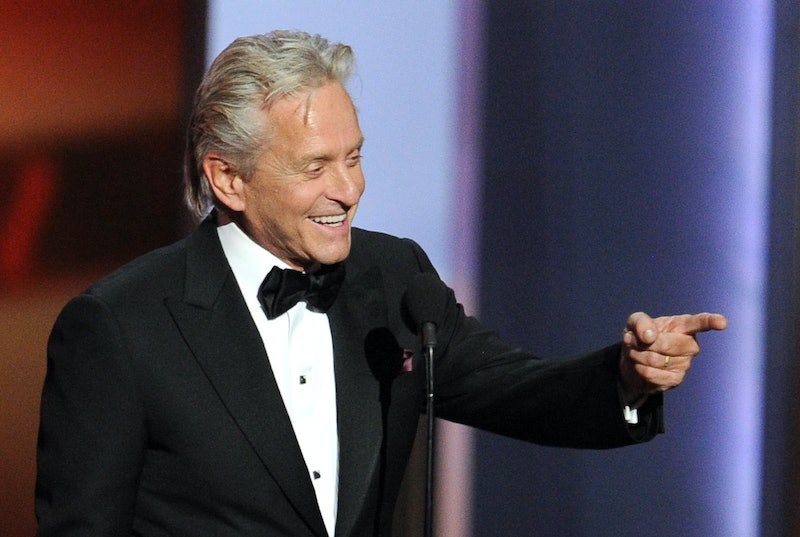 This year's Emmys may go down as one of the strangest ceremonies in recent memory — one that was capped off by some interesting comments from Behind the Candelabra star Michael Douglas. He and wife Catherine Zeta-Jones announced their split last month, but he made mention of his wife in his speech, thanking her. (Something most tabloid-shy celebrities would avoid doing at all costs.) So, since he brought it up, what does it all mean?

"I wanna thank my wife Catherine for her support," Douglas said as he accepted the award for Outstanding Actor in a Miniseries/Movie. This raised a couple questions marks for audiences viewing at home (and, likely, for those present as well), as Douglas' split from Zeta-Jones was fairly well-publicized.

The couple had been together for 14 years and have kids together, so it's possible the separation doesn't mean imminent divorce. But perhaps they've reconciled as well? (Though, the lack of Zeta-Jones' presence seems to indicate otherwise.)

Though the state of their relationship is unclear, what was clear was Douglas' attempt to get laughs during his gay joke-filled acceptance speech, which referenced on-screen lover Matt Damon several times:

"This [film] was a two-hander, and Matt [Damon], you're only as good... (laughter, applause)...you're only as good as your other hand. You were magnificent, and the only reason I'm standing here is because of you, so you really deserve half of this. so. do you want the bottom or the top? Top. I figured that."