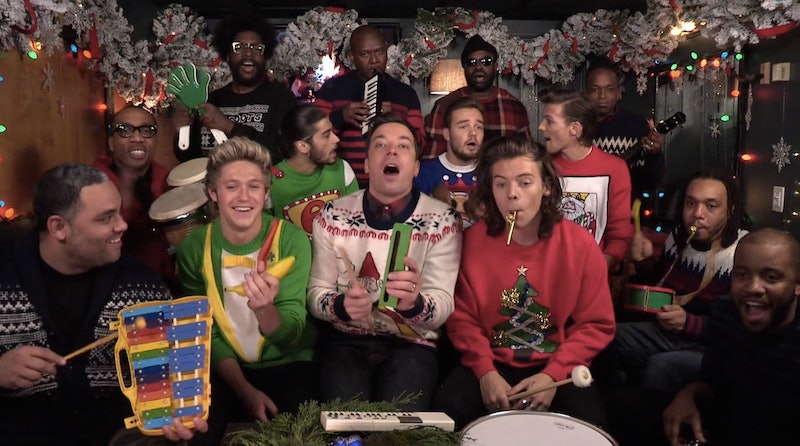 I've said it before and I'll say it again. I consider myself a casual Directioner. While I don't spend my time trending bizarre hashtags on Twitter when I'm bored or salivating over the thought of their next album, I do stalk the boys' lives for fun rather than simply for work. So when I heard that One Direction was singing Christmas carols on Jimmy Fallon, I was immediately excited. The boys of 1D are so hilarious that I believe they should have their own sitcom, let alone appear on every talk show under the sun. I mean, just look at a drunken Harry Styles dancing with Kristen Wiig if you need more proof that these boys bring the lulz. However, it wasn't just lulz that they brought me with their appearance on The Tonight Show. Oh, no. They also brought me a ton of confusion as to what exactly they thought they were doing.

The twist of the skit — there's always a twist when Fallon is involved — was that the music for the Christmas carol ("Santa Claus Is Coming to Town") was being played entirely on toy instruments. Which, you know, is perfect for 1D because they are not the kind of band that plays instruments; they are the kind of band with voices like European angels. However, that's around when this entire sketch stopped making any sense. I have so many questions, guys.

Why is Zayn sitting in the back?

I don't mean to be that person, but have you seen Zayn Malik? Not only is he arguably the most attractive member of One Direction, but he's also the shyest. Which, I suppose, explains why he's in the back, but I still think they should have replaced Harry Styles' seat in the front with Malik's seat in the back. I love Styles, I do, but I see him all the time. I'd much rather have been staring at Malik throughout all of this.

Why is Niall the one playing the banana?

Styles is the one who is always consuming food on stage at concerts, bananas being only one of many. Shouldn't he have been playing the banana? Just because it matched better with Niall Horan's outfit doesn't mean it makes any sense!

Why does Harry make the same exact faces when he sings?

The top picture is from his performance on The Tonight Show. The bottom picture is from One Direction's Pokemon song, sung way back during their X Factor days. Styles may have gotten older, but dramatically playing the drums while making all kinds of adorable faces seems to be his M.O.

Why is Zayn staring at Liam?

What's going on back there, guys? Liam Payne looks afraid. What are you communicating with your soulful gaze now, Malik? Pay attention to the Christmas song!

Where can I get Louis' sweater?

Where can I get all of their sweaters, really? They look like merry Christmas elves and that makes me all kinds of happy.

Check out the video below for answers to none of these questions.