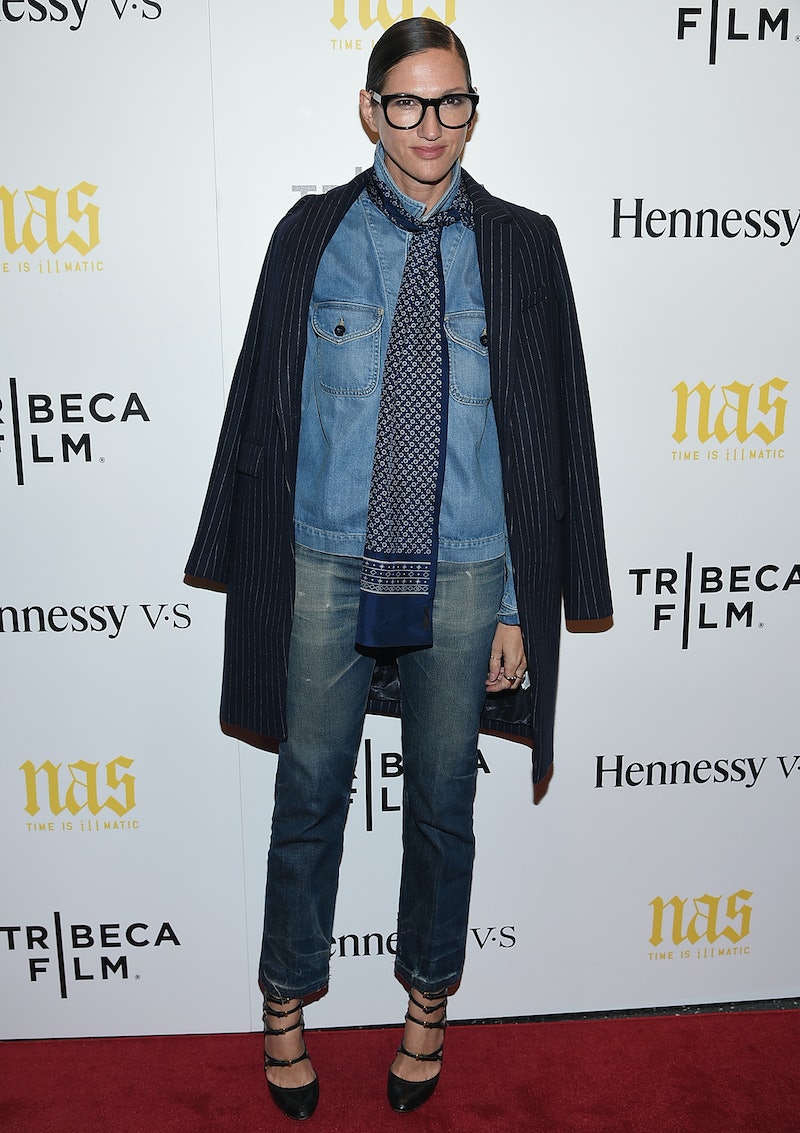 Here at Bustle, we adore J. Crew's Jenna Lyons for her flawless style, dark-framed glasses, and that cameo appearance in Girls, among other reasons. Despite the fact that womenswear is a major business, there are still surprisingly few female designers in the limelight, and so it's exciting to see a so-called "cult of Jenna Lyons" developing around the creative director, who I'm pretty positive single-handedly made the statement necklace cool again.

The New York Post has reported that Lyons was asked to "cut back on self-promotion" by higher-ups at the company following a year of bad sales, but since J. Crew has denied that rumor, we're taking what they say at face value and focusing on the positive. Lyons has done fantastic things for J. Crew and for fashion, and for that we are eternally grateful. As Veronique Hyland at The Cut points out, male designers are all about that self-promotion (Tom Ford, Jeremy Scott, and Karl Lagerfeld are a few very apt examples). Why shouldn't women use the same tactics to encourage engagement with the brands they represent?

We need Jenna Lyons in the spotlight! Why, you ask? Because of these five reasons, which all boil down to one powerful word that, like J. Crew's fearless leader, should never be banned — FEMINISM! Oh, and cool clothes.

1. She Made Glasses Totally Chic

As a total "four eyes," I'm grateful to Jenna Lyons for making glasses seem cool instead of lame. Now, thick frames are a major style statement, which is great news for those of us who actually need help with the whole seeing thing.

2. She's Open About Her Same-Sex Relationship

In 2012, Lyons publicly acknowledged her romantic relationship with Courtney Crangi during an acceptance speech at the Glamour "Women of the Year" awards. She's stylish and an LGBTQ role-model!

Kate Middleton may be one of the most famous women ever, but even she totally lost it when she met Jenna Lyons at an event in New York City earlier this month.

4. She's So Well-Dressed It Hurts

Lyons almost upstaged the bride at Solange Knowles's wedding, that's how amazing she looked. Her style provides the perfect outfit inspiration for any occasion because it's equal parts wearable and glamorous.

5. She Basically is J. Crew

Nothing makes me want to shop at J. Crew more than Jenna Lyons and her epic personal style, which is somewhat synonymous with the brand. Stopping into a J. Crew store almost feels like taking a shopping trip through Jenna's closet. And what would be better than that?

More like this
These Are The Best Socks A Woman Can Buy
By Lisa Fogarty
Tilda Swinton’s Neon Yellow Hair Is More Than A Style Statement
By Justine Knight
How To Wear A Bucket Hat Like Rihanna, Dua Lipa, & More
By Allie Fasanella
Serena Williams Looked Like Royalty In A Bodycon Velvet Dress
By Allie Fasanella
Get Even More From Bustle — Sign Up For The Newsletter