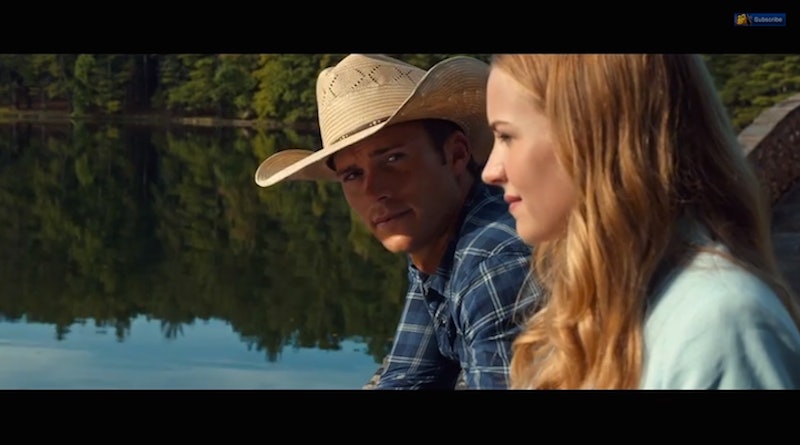 Start hoarding your tissue boxes because come April, you'll need them. Nicholas Sparks' new movie The Longest Ride has just released a trailer, and it looks like it is going to be a tearjerker (but aren't all of his films?). The movie is yet another novel turned movie by Sparks — something he is pretty damn good at — and revolves around the story of two young lovers and a similar love story that took place generations ago, told through the eyes of the elderly widower. If it sounds like something you've come to expect from Sparks' films and books, then you're not alone.

I love a Nicholas Sparks movie as much as the next person — even if they deny it — but there are certain components of his books and movies that almost seem like givens from the storyteller. Tears, drama, tragic love stories, all take place in his works, and The Longest Ride looks to follow suit. The film stars Scott Eastwood and Britt Robertson as the two young lovers Luke and Sophia, respectively. Alan Alda plays Ira, the elderly widower who looks back on his relationship with his former love, Ruth.

To prep yourself for the film, check out the most Nicholas Sparks-y moments from The Longest Ride trailers.

Played by Britt Robertson, Sophia Danko is a college student who falls in love with Luke, played by Scott Eastwood.

Scott Eastwood plays Luke Collins, a young cowboy who finds love, but also struggles to find the courage to leave the risky career he has chosen.

Nicholas Sparks loves to hurt audiences with a lonely old man (Alda) you can't help cry over every single time he is on screen.

I'll even give away extra points if the historical romance involves a war hero, which this film obviously does.

Just once, I would like a Nicholas Sparks couple to meet on OKCupid or Tinder, because it's 2014, and not that many couples are meeting at THE RODEO.

Don't worry, Sparks has included plenty of sexy moments throughout the film, but will anything ever beat that one Notebook scene?

Note the dramatic exit takes place in the rain, because Sparks loves a good torrential downpour.

Watch the entire trailer below.