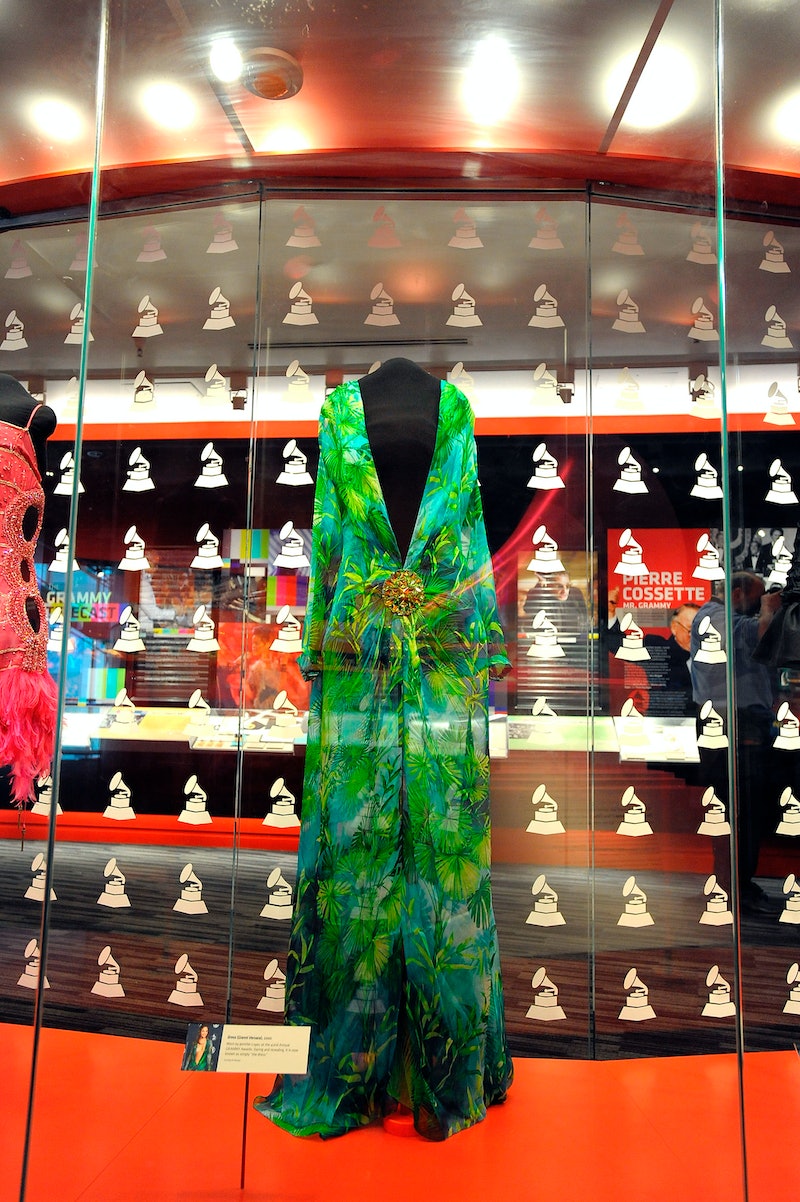 If I were to say the words "Jennifer Lopez" and "green dress," an image of the dancer-turned-actress-turned-singer scantily clad in her Versace gown would no doubt pop up in your mind. That's because it's arguably her most iconic look of all time. It's the look that forced a thousand jaws to drop, encouraged women all over to delve a little deeper in their necklines and conjured all of the jealous feelings towards Diddy (her then beau) among men everywhere. But what if I told you that she wasn't the first to wear said iconic dress? According to Buzzfeed's Lauren Yapalter, Ginger Spice wore Jennfier Lopez's iconic green gown one entire month before she did. Say what?!

It's true! Lapalter reported this mind-boggling discovery earlier today complete with photographic evidence proving that Geri Halliwell did, in fact, don the Versace gown on January 22, 2000 — one month before the Grammys. And although Jennifer Lopez undoubtedly killed it in the dress, Halliwell didn't look half bad either. She rocked the sheer gown with waist-long locks and chunky sandal heels. Still, it did not cause a stir the same way it did when Lopez stepped out onto the red carpet.

Now, before you go feeling sad for Halliwell, let's not forget that she, too, has her own iconic garment — the British flag mini dress. Also, Jennifer Lopez hasn't always been a outfit thief — she has been the victim of dress copying herself.

In 1998, Jennifer Lopez wore a gorgeous sequined mermaid gown. Ten years later, Beyonce wore the same exact dress in her video for "Diva." This isn't the first time Beyonce's been accused of copying her style either. After some investigative research on the Internetz, I found an entire forum thread claiming that Beyonce is a J.Lo copycat. The evidence shows some pretty interesting comparisons, from magazine covers to red carpet appearances to stage outfits, proving that Lopez has been quite an influence on Beyonce's fashion. Take a look here to see for yourself.

I'm not saying fashion karma is real or that fashion is a flat circle or that any of this actually means anything significant at all. I'm just saying that celebrities are just like us — they like to find inspiration from other celebs' looks, too. It's just when they do it, they get majorly called out for it. Regular humans (us): 1, Fashion-y celebs: 0.