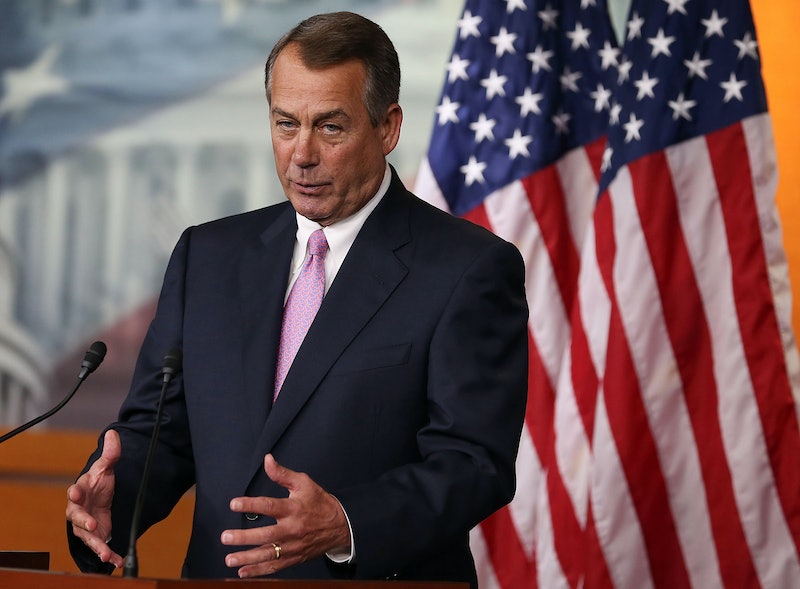 Here's some astonishing news to start your week off right: the public is overwhelmingly against the Republican threat to shut down the government in an effort to defund Obamacare. That's right, people want healthcare and a functioning government.

A CNBC poll released Monday shows the public is against defunding Obamacare, both in general and when doing so is tied to a government shutdown. Forty-four percent say they oppose defunding the president's signature healthcare law, compared to 38 percent who say they are in favor of defunding it.

Republicans pushed a spending bill to defund Obamacare through the House Friday, so the Republican crusade to kill the president's healthcare policy is set to move onto the Senate. The continuing resolution to defund the policy, by all accounts, faces a zero percent chance of staying in the Senate's version of the bill, which means House Republicans will face the decision whether to a) listen to voters and fund the law, or b) fund nothing and force a shutdown.

Running the numbers on which is more responsible and logical, let's recall that a government shutdown would cost the United States billions of dollars. Adjusted for inflation, the two major shutdowns of the decade cost about $2 billion in today's dollars — and that figure doesn't take into account the lost value of work that wasn't done, the hundreds of millions of dollars federal parks would have taken in during that time, the reduced rate of IRS audits, and numerous other less visible repercussions.

The poll results come at the same time as news that Obama and Congressional Democrats have no plans to back down on the debt limit, which makes sense given that raising the limit allows the government to make payments Congress itself has already authorized.

As the Washington Post's Wonkblog reports, President Obama phoned House Speaker John Boehner (R-OH), which one of Boehner's aides called "brief." Obama didn't want to speak about even the possibility of a shutdown, instead reiterating that he would not, under any circumstances, negotiate over the debt ceiling.

And Senate Democrats are backing up the president. Senator Patty Murray, the chairwoman of the Budget Committee, and Max Baucus, the chairman of the Finance Committee, are sending a "dear colleague" letter Monday, stating, "President Obama has been clear that he is not going to negotiate over the debt limit, and Congressional Democrats stand behind him strongly."

"Democrats are very interested in negotiating with Republicans over replacing sequestration, investing in economic growth, fixing our broken tax code, and tackling our long-term fiscal challenges fairly and responsibly," the letter reads. "... The Tea Party continues to mistake its high-stakes game of chicken for economic stewardship. We need to hold them accountable for this deeply irresponsible approach, which is hurting economic growth and the economic security of all Americans."

As Wonkblog's Ezra Klein points out, public statements from both Boehner and Congressional Democrats mean Washington is in a position where Boehner can't lead the House to raise the debt ceiling without concessions — and Dems can't concede anything in return for the House speaker raising the debt ceiling. And no one, including the participants in the process, knows how Congress is going to fix this humongous, looming mess.

Happy Monday indeed. Here, make a game out of it.

More like this
Are John Legend & Kanye West Still Friends? The Singer’s Latest Update Is Candid
By Brad Witter
Rishi Sunak's Wife Is Worth More Than The Queen
By El Hunt
It’s Official: The UK Is Hosting Eurovision 2023
By Sam Ramsden and Rachel Mantock
Christina Aguilera Took A Powerful Stand At Brighton Pride
By Sam Ramsden
Get Even More From Bustle — Sign Up For The Newsletter