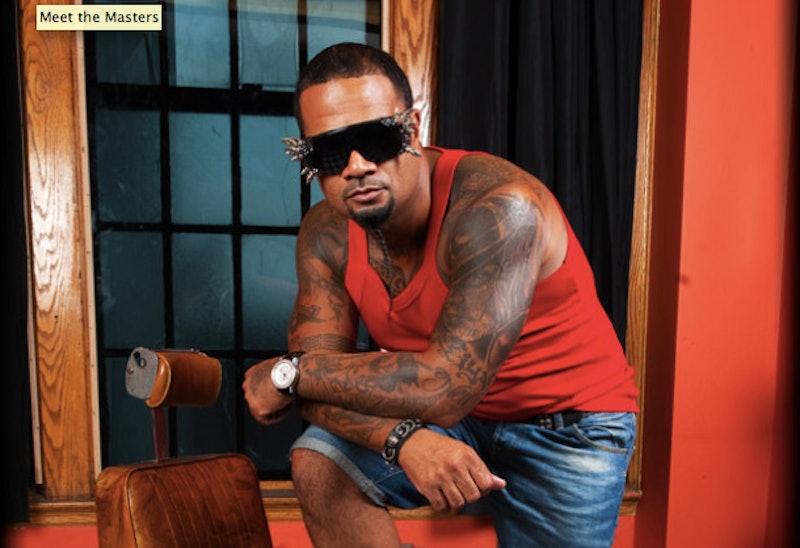 One benefit that comes with reality TV shows is that most things are, well, real. Since reality series take place in the real world, there's real product placement, real shops, and real people being featured. And in competition shows like Spike TV's Ink Master, the tattoo artists in the contest are most definitely at the top of their game. Season 1 artist Al Fliction will be back in New Year's Ink , airing Tuesday night. It's a special competition with several alums from various seasons competing for a prize of $10,000. But no matter who wins the New Year's crown, you can definitely get inked by Fliction if you're in the New York City area.

Fliction was eliminated in Season 1's third episode, because judges thought he lacked technical skills. But that hasn't stopped the Brooklyn native from success. Fliction is a self-taught artist who has has inked more than just skin — his first job was airbrushing T-shirts at Albee Square Mall in Brooklyn and he was very much part of the '80s graffiti movement in New York City. His tattooing apprenticeship was super hardcore, though, as Fliction told the New York Daily News he learned the art in prison. Of course, now he works at a tattoo shop, and here's how you can get inked by the reality star.

Fliction owns Bkyln Ink on Bedford Avenue in the Crown Heights area of Brooklyn. The Park Slope native grew up in the borough and enjoys bringing artistic ink to the inner city neighborhood.

If you're not in NYC or not traveling there any time soon, you can always try to catch him at the Got Ink? All City Urban Tattoo Tour, founded by Fliction, which holds conventions in the leading urban tattoo markets across America.

You can request an appointment with Fliction through his website, or by emailing or calling him with the information found there. Who knows how long the wait is, but it's totally worth a shot. Fliction specializes in helping his clients design tats that tell their life story.

“In my shop, we don’t have any flash on the walls," he told the Daily News. "There’s nothing on the walls for you to pick from. You have to explain to us what you want. It’s like hip hop music. If you listen to hip hop music, it’s just telling stories of their struggles. It’s the same thing with urban tattoo art.”

Like I mentioned above, Fliction got is tattoo education while he spent six years in jail on a drug charge. The training was a bright spot during a dark time in his life.

“I was always interested in tattooing, but there was no way to learn it," he told the Daily News. "There’s no tattoo schools...I was black from the hood. You couldn’t just walk out to Long Island and walk into a white shop and say, ‘Can I be an apprentice?’ I went to prison wondering ‘Why me, why me, why am I here’ - and I picked up the trade I always wanted to learn.” He's put that trade to great use, and now you can be a part of it.

More like this
Yes, That Is Victoria & Another ‘BiP’ Alum In Zach’s ‘Bachelor’ Trailer
By Kadin Burnett and Grace Wehniainen
'The White Lotus' Costume Designer Explains That Accidental 'Princess Diaries' Moment
By Grace Wehniainen
Twitter Is Very Torn About The Winner Of 'Dancing With The Stars' Season 31
By Jake Viswanath
Here’s How Much It Costs To Rent The St. David Yacht On 'Below Deck' Season 10
By Gretchen Smail
Get Even More From Bustle — Sign Up For The Newsletter