If there's one thing we know about the Kardashian family, it's that they'll completely take over any place they go. This includes the Hamptons in Long Island, N.Y., where the family recently filmed the Keeping Up With the Kardashians spinoff Kourtney and Khloe Take the Hamptons, which airs its season finale on Sunday night. The ladies even dominated the fictional version of the town in the USA Network drama series Royal Pains . Khloe Kardashian and Scott Disick had cameos in the show's Season 6 finale, which aired in September — and they were such scene stealers.

Of course they were. Midway through the episode, titled "Ganging Up," Kardashian and Disick play themselves dining at a beachfront Hamptons restaurant where Dr. Hank Lawson (played by Mark Feuerstein) and girlfriend Charlotte (Gillian Alexy) see them — actually, she hears Khloe's unmistakable laugh. Evan takes Charlotte to meet Khloe and Scott and introduces her as "she used to be blind." Charlotte prefers to be known as simply "a really big fan," which Khloe and Scott assure her is all she needs to say in order to talk to them. And then they invite the superfan to join them for lunch. As for Evan, his invite was never issued and he's left standing, watching, listening. Watch Scott and Khloe talk about their appearance in the video below. 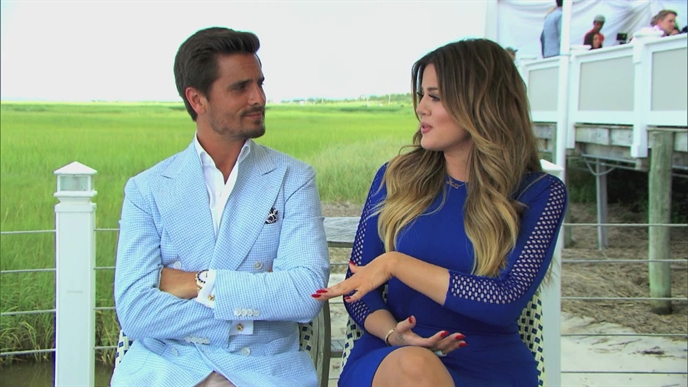 This fun and cute appearance got me thinking. This could pave the way for more Kardashian cameos in the future. I mean, there are plenty of Keeping Up With the Kardashian spinoffs, and plenty of TV shows taking place all over the country. Potentially — and we all knew this was coming — the Kardashians could even take over fictional TV.

Jane and her family are fans of telenovelas — maybe there's a chance she or one of her coworkers could be a fan of the never-ending American telenovela that is KUWTK and its spinoffs.

Kourtney, Khloe, and even Scott could totally show up on ABC's Revenge, that other show that takes place in the Hamptons. Victoria (Madeleine Stowe) doesn't seem like she'd have the time or patience for watching TV — too busy scheming, right? — but perhaps Emily Thorne could take a shopping break and head to the Dash store.

The NBC mainstay is all about getting famous guest stars, so how about a case that centers on a celebrity who's constantly hounded by the paparazzi, and then suddenly snaps on a photographer? Kim could be a consultant on the case to help Detective Benson understand what it's like to be chased by cameras all day— and maybe she can bring Kanye and adorable little North, too.