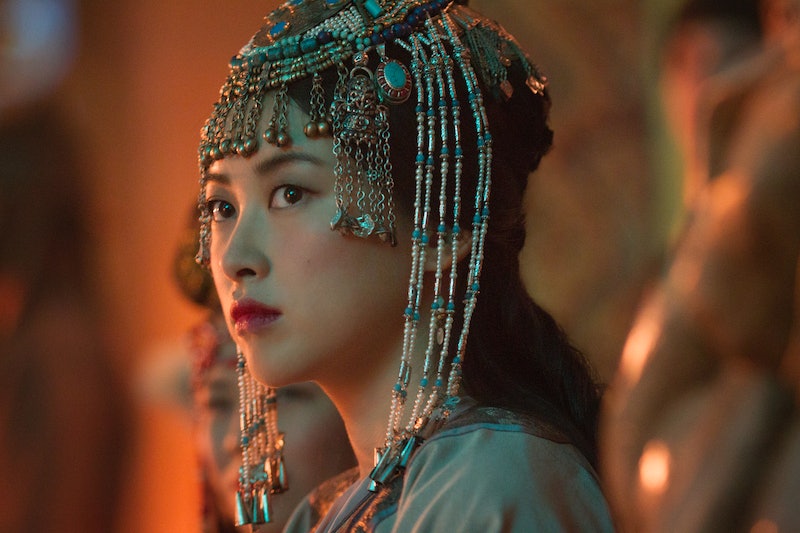 Netflix has made a pattern out of "Trojan Horseing" a few of their original series: advertising that it's ostensibly about a nice, safe, white person, but then using that character to tell the stories of much more interesting characters with more marginalized identities. That's why one of Marco Polo 's most intriguing characters is Kokachin the Blue Princess, a beautiful, bewitching Mongolian woman who exists largely to blow Marco Polo's mind with her sex powers. So the character as written is not without her flaws, but props to the creators for including The Blue Princess, a very real woman from history, and presenting her as a complex character (or at least as complex as the Marco Polo characters can get).

Even though the endlessly beautiful, but forbidden princess is a total cliche, that doesn't mean that the writers are making the Blue Princess up — they've actually mined a great deal of real history for her backstory, even if a few things around the edges have been fudged for dramatic purposes.

She Really Was Betrothed by Kublai Khan

In 1291, the Blue Princess was promised to Ilkhanate khan Arghun, a minor political leader dispatched by Kublai Khan to rule over some of his territory, after his former wife from the same region died. And it's pretty easy to assume that she was less than enamored with the idea of being sent off to live with a strange man who was probably also bedding dozens of other women just for a political alliance? But that's just a guess, I mean, it's not like anyone would have asked a woman how she was feeling.

But She Didn't Make It in Time to Meet Her Fiancé

By the time the journey was over, Arghun had died of old age, so she was instead married to his son, Ghazan, to cement the alliance. Again, this was not the most romantic pairing.

She's One of the Only Mongolians to Sail

One thing the show does convey is just how unbelievable this meeting of the cultures was. And mirroring Marco's journey with Kokachin's, since both are owned by the emperor Khan, was a smart narrative choice, since both are strangers in a strange land… sort of. Obviously, Marco Polo is from Italy, so he doesn't know anything about China and the Mongolian empire. But the Blue Princess had never traveled by ship before, which is probably why their journey took so long and was plagued by so many delays, according to The Travels of Marco Polo .

First things first: the real Blue Princess would never waste her time with the shallow dish of tapioca that is Netflix's Marco Polo. He's a bit of a loser. But the real Marco Polo was reportedly entrusted by Kublai Khan to escort her across the terrain. Did they dewily stare into one another's eyes? Probs not. But could they have fallen in deep dark love? Again, probs not. We know that the journey happened, and why. But Marco Polo's role, if any, remains something of a historical mystery.