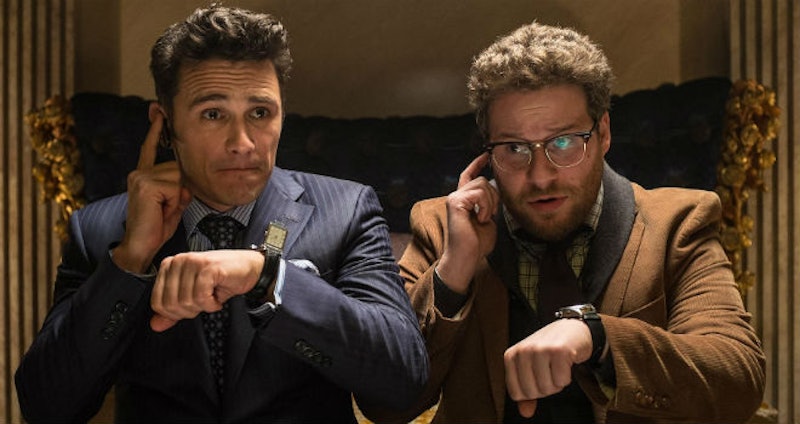 Welp, it looks like we've got approximately two million proactive patriots in our midst, America. Despite all of the heightened drama due to the Sony hack and direct threats to The Interview movie goers, that didn't stop a whole bunch of people from essentially telling those hackers to uh, shove it, the American way. Their chosen form of rebellion? The brave and unflappable viewers shelled out $15 million dollars to Sony to see The Interview, not by physically going to the theater (though Sony did relent and release it) but by either renting or buying the movie online, as according to The Wrap via Sony.

It should be noted, as The Wrap states, that The Interview opened in, "331 independent and mainly smaller theaters..." on the same day as the online release and, "...Took in $2.8 million over the four-day holiday weekend after opening to $1 million on Christmas Day." So, not too shabby of a grossing for a movie that almost didn't see the light of day, especially considering the endless options Netflix and Hulu provide us from the comfort our couches. In fact, it's currently Sony's #1 online film of all time. Whoa.

It helped that Sony gave potential viewers a whole lot of options on how exactly they could get James Franco and Seth Rogen's shining faces on their screens. According to the site,

"Sony made The Interview available online across the United States on Christmas Eve to rent ion Google Play, YouTube Movies, Microsoft’s Xbox Video and the dedicated website www.seetheinterview.com at a price of $5.99. The film was also available for purchase for $14.99."

This just goes to show that nothing and no one can keep America down, or, stop us from streaming movies from our laptops. Take that, hackers.