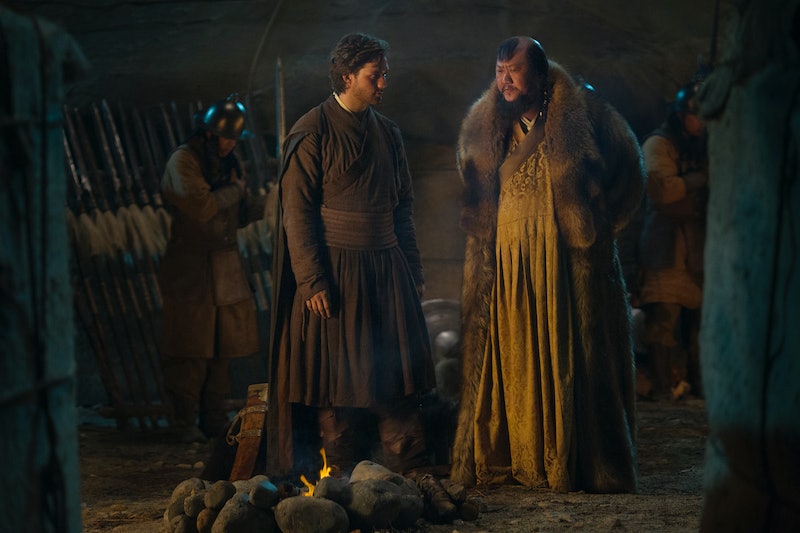 It's been a while since I took a history class, but it's only been like five months since it was summer vacation. So I can't be the only person who still thinks "swimming pool" when I hear Marco Polo, the newest Netflix original series. But surprisingly, it's not totally off base to make that connection, because the Marco Polo pool game gets its name from the actual explorer. One origin story claims that while traveling to China, Marco actually got separated from his family and responded with "Polo" as they called for him with "Marco!" Versions of the game date back to the 1700s, though it was originally land-locked and called Blind Man's Bluff. But just as Marco Polo himself took to the seas, when Blind Man's Bluff took to the water, the name stuck.

But there's more than just the inspiration that connects Netflix's new series with the classic pool game. Considering that one is a medieval adventure series and the other is something that kids get to play as a reward after completing a swimming lesson early, there's a surprising number of parallels between them. And to think, after spending all those summers during elementary school at the pool that we could have been developing an online drama series.

Hey, enjoy Marco Polo all you want, but I will judge you if you enjoy the character of Marco Polo more than any of the supporting leads. Just like the person with their eyes closed ends up bobbing awkwardly against the concrete corner between the deep end and the ladder for half of the game, Marco always ends up with his mouth agape as someone is disemboweled in front of him. Kublai Khan, his wife, and his major advisors are all much more fascinating.

You Can't Enjoy Romance During Either of Them

Even though Zhe Zhe's performance is a highlight of the series, it feels like her romance with Marco is wasting a ton of screen time. It's just like when your best friend would bring a date over to the pool and they'd spend the whole game canoodling. Third wheelin' it during what should be a platonic summertime activity? Not cool.

There Are Unspoken Rivalries That Get Pretty Serious

Just like Kublai's wife, Chabi, was revealed to be a double agent, you can't trust anyone during a game of Marco Polo. Brothers and sisters, best friends, cousins, all turned against one another if they happen to have an acoustically resonant voice and keep hugging that sunny spot near the diving board.

Both Are Only Fun for So Long

Just like your average summer at the pool, after watching too much Marco Polo, you may find yourself bored, cold, and pruney after more than 50 minutes of playing. Best to get out for a little bit and eat a tuna fish sandwich in between episodes. But make sure you wait a good hour before getting back into the pool/reopening your laptop, or you might get a cramp. Or get kind of bored and fall asleep.