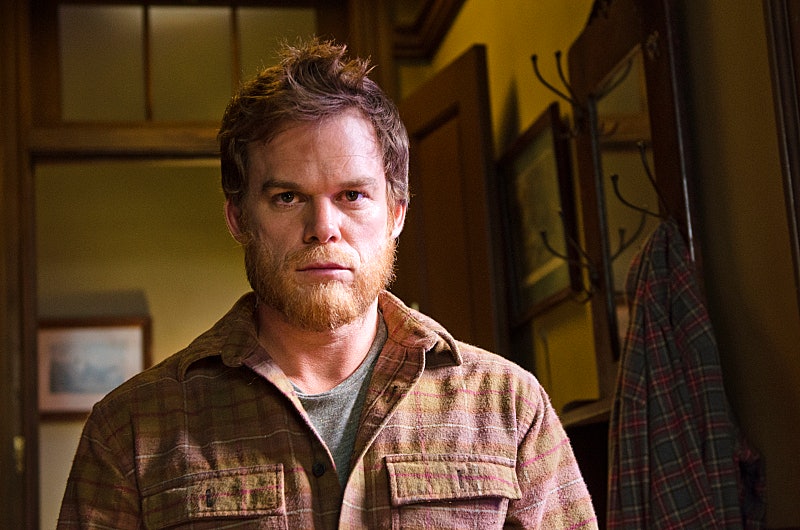 So: nobody liked the Dexter series finale on Sunday night. Add this author to the pile of those left unsatisfied. But I, unlike many, am not all that surprised. Because Dexter the series (as well as the character, really) has been trapped between what it is — a show about a psychopath who is outside of the "normal" human experience and therefore incapable of learning and moving forward — and what it wanted to be, for a very long time. Which is to say, Dexter hoped to be the torchbearer of antihero television following in the footsteps of its predecessor, The Sopranos. But Dexter Morgan is no antihero.

When you talk about the antihero on TV, most are quick to look to Tony Soprano as the originator of this golden age of bad-guy-you-root-for character dissection. He was not good, sure, but he did feel things. The Sopranos and Breaking Bad are both about complex family men in that same way; trying to stay on top and maintain both balance and control. Dexter is about a psychopath masquerading as a family man — he wants balance insofar as it allows him cover, not contentment. Control is all he's after.

To position a man with an inability for empathy on a chemical level as an antihero is the ultimate failure set-up: he cannot and will not be able to learn, so trying to make him do so comes off as inauthentic, no matter how many times you try. (Cough.) Instead of letting Dexter be the Dexter we saw in the first four seasons, the show's helmsmen tried desperately to fit their oval peg into a round hole. To which we say: Close! But no cigar.

Sure, he's a serial killer with a code of gold, but there was no real heart to be found in the center of Dexter Morgan, and nor should there be: he's a serial killer and a scientifically proven, diagnosed psychopath. Meaning he never had the capacity for the emotional arc that true antiheroes attain. Instead, Dexter can only be mired in varying cycles of behavior, leaving no room for evolution to a new plane of thought.

Nothing proved this more than its series finale. To be an antihero means to exist in the human duality of being and evolving, regardless of to which end of the spectrum these changes take a person. Dexter Morgan was never going to be that man, no matter how hard the show tried, because that's not in his nature.

Dexter premiered in 2006, the year before The Sopranos ended, putting on its back the pressure to be (or delusion of being) the antihero torchbearer. It certainly seemed poised to do just that when you look at its most basic structural points: a serial killer who only killed bad guys? Played by the couldn't-get-any-better Michael C. Hall? Moral ambiguities coupled with secrecy and vigilante justice? Yes! we, the television audience cried.

But while both shows follow similar outlines, that is really, where the convergence ends. And as Dexter successfully rode the wave left in The Sopranos wake during its first four seasons — allowing it to push a little bit farther, be a little bit more controversial, show a bit more gruesome, grisly death and blood — it would never, in good conscious storytelling, be able to push itself to Heisenberg levels of greatness. Which made it the perfect middle-step between The Sopranos and the true heir of the bloodied antihero throne, Breaking Bad.

To be able to show the duality (on a, to be sure, heightened level) of existing within the good and bad parts of oneself is the bread and butter of the antihero complex. This is where The Sopranos and Breaking Bad succeed: and that success rests solely on the antihero's ability to react and then adapt, course-correcting in an internal way. Internal contemplation is straight-up not an option for a psychopath. Even a quick glance at the FBI's behavioral analysis of psychopathy in serial murders proves that "failure to accept responsibility" is a big one.

Both Tony Soprano and Walter White have at least shown an understanding of their own responsibility, regardless of whether or not it does them any good in the end. And while Dexter said that he did — needing to "save" Harrison and Hannah from himself — his actions paint another picture entirely. Their ideas of the American Dream are quite different.

But the difference between Dexter and The Sopranos and Breaking Bad, is that Dexter Morgan was never trying to genuinely live the American dream — merely use and abuse it as a cover to allow for bad behaviors. And the show manipulated you into thinking there would be an arc (rather than a story about a man who is chemically incapable of having that sort of change), because it was trying to make itself believe that was possible. Ultimately, though Dexter Morgan could go through the motions, he could never really exist in a world where the consequences of his actions were real, because he doesn't accept personal responsibility — a vigilante justice-seeker always believes they serve a higher purpose.

The Sopranos and Breaking Bad were able to show one point of change to another because there wasn't a totally-certifiable psychopath at the center of their shows — even if shit like Walter White's meth shenanigans seemed pretty psycho to us non-kingpins. Because their actions always had very real consequences for Tony and Walt, there was no way to go back (even if the ending is a bit, ahem, ambiguous). Tony Soprano can never go back, Walter White will (most likely) never go back. Dexter — because he's a psychopath — can always go back, because he does not have the capacity to internalize forward emotional momentum and change. Monkey see, but monkey cannot do.

That's because Dexter Morgan is selfish: despite all attempts by the writers to try and say otherwise. Walter White and Tony Soprano — regardless of their ego and what it's made them do — all come from a place of love, namely for their own families. Walt wants to leave money for his family, to take care of them after he dies. Tony was always about protecting his own. Dexter was merely reactionary, living all-too in the moment for any real sort of long-term, impactful development to take place.

Did Dexter love Harrison? As much as he probably could, yes, but still: he had no qualms leaving him with his indentured servant/nanny Jamie Batista, for days on end. Or, you know, leave him with another serial killer who has no problem killing quote-unquote loved ones if it means protection. He doesn't see how emotionally fucked-up it is to do that to his child, and his apparent true love. That need to save those others that he "loves" isn't there. And that's some straight psychopath shit. Tony Soprano and Walter White, bad as they may be, are not clinical psychopaths. They still have feelings. Attempting to and actually straddling the line are two very different things.

Dexter the series found its place in television history — as the middle-step between The Sopranos and Breaking Bad — regardless of its aspirations.