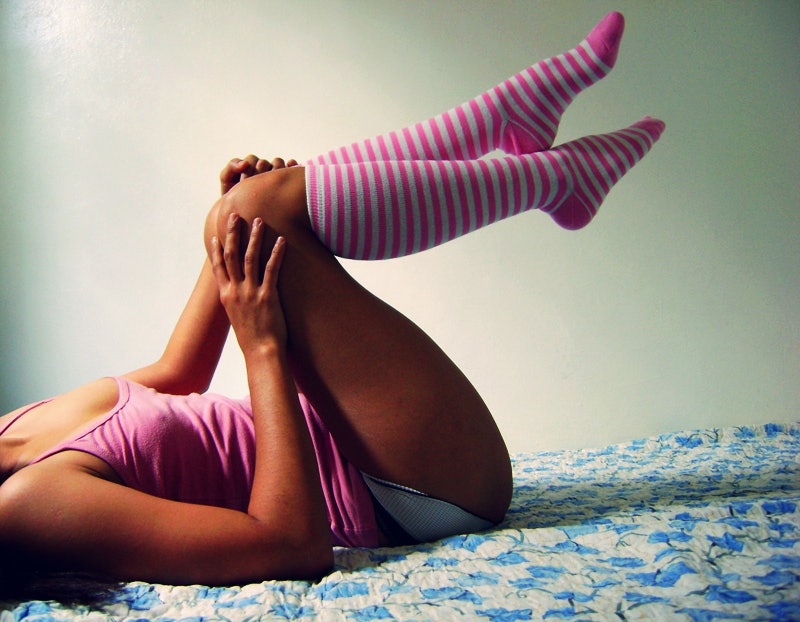 When it comes to having morning sex, the early bird catches the ... I'm not even gonna finish that one. We'll stick with this: Rise and bang, y'all. There's much more than double-shot espressos or punishing treadmill poundings waiting on the other end of an early wake-up call. Morning sex has so many perks that you'll forget it was ever tempting to hit snooze.

For whatever reason, conventional sex culture holds a powerful association between boning and nighttime. For most people, canoodling time traditionally comes at the close of a day, when both parties are wiped out, hair askew, nerves fried. The hours before sleep usually sees us with bodies depleted of the spirit and vigor necessary to make sex anything other than relatively blah. Plus, it's dark, so what are you even looking at right now? Often, when a workday starts winding itself down, the only thing that sounds particularly enticing is takeout and your couch. Sometimes, you can summon enthusiasm to get yourself and another person off, but liiike ... shouldn't you want it more than that? It doesn't have to be this way, guys.

Not that I don't get why we tend to put sexy time at the end of the day in our mental planners. It's usually before sleep, when couples are spending any awake time in bed together. In the morning, it's all about soaking up as many moments of sleep as possible, so there isn't a lot of downtime before you actually have to get up. For pairs who are still dating, that mostly happens at night. But all of that aside, doesn't it seem more logical that we would enjoy sex more if we did it during a time of day when our bodies were rested and fresh, with all of our nerves ready to do their most pleasurable jobs?

It Relaxes You For The Day Ahead

It's hard to let bad traffic annoy you when you pull onto the highway already mad chill. "Couple sex with a cup of coffee for a fantastic start to your day ... it's more relaxing than a wake and bake," VICE sex columnist Sophie St. Thomas told Bustle. Such truth. Getting off first thing in the morning can be kinda like a big bong rip or a consolidated yoga class — it calms frazzled nerves.

It Turns Your Brain On

Orgasms are good for your brain. Not only does la petite mort increase oxygen and blood flow to this vital organ, it summons other various nutrients as well. Essentially, having sex can activate your entire brain. YEP.

Work can suck in general. It can also specifically suck emotional, spiritual, and physical energy from you. Top off your posi vibes well with a nice romp before the paperwork piles up. "Morning sex is the best because no matter what happens the rest of the day, you already got laid, so life can't be that bad," St. Thomas says. "Orgasms are a mood boost." Not to mention, a little post-coital swagger really pulls together a power suit.

You're Too Groggy To Be Self-Conscious

When it's early in the day and you are sans caffeine, you're far less likely to fret over that weird slapping noise bodies make sometimes or how your arms look bent over your partner (seriously, why do mirror closets exist?). Everything is in soft focus. Relationship expert Dr. Wendy Walsh told us more about this:

"Sometimes, when people are half-asleep or half-awake, it functions a little like how alcohol functions: It lowers some of their inhibitions. When you are inhibited, it means you’re feeling overly self-aware. You’re worried about what your partner’s perceiving. However, when your inhibitions are lowered — whether artificially through alcohol at night, or in the morning through drowsiness — it allows you to get closer to the animal in you. Which is what procreation is ... let the animal rave, let the animal free."

Yeah, so, also "let the animal rave" is my new favorite euphemism for sex.

It's Convenient If You're Already In Bed With Someone

When was the last time you got a booty call that synced with The Today Show? Probably never, because that doesn't happen. (Except that one time when my 7 a.m. booty request was successfully fulfilled. Thanks again, dude.) It just isn't convenient to jump two train lines for the sole reason of knocking boots before work. But when you already have an attractive warm body sharing the bed, it doesn't get much easier than that.

The Spontaneity Is Hot

Often, a lot of planning comes into play when you're looking to get laid. Swooping the perfect cat eye eyeliner, shimmying on frou-frou underthings, possibly shaving some body parts — it's a whole ordeal. The Frisky Editor in Chief Amelia McDonell-Parry says:

"... morning sex often seems to just kind of happen — but in a sexy way, where you both are half-awake but instantly turned on by the body laying next to yours. Sometimes, no words are even exchanged until after the deed is done, and one of you utters a breathless 'good morning.' It's so hot, and more than makes up for morning sex's only downfall — morning breath (and whatever, your bad breath cancels out his bad breath and vice versa)."

Ahh, yes. Please remember to brush your teeth before bed, regardless of imminent morning sex plans.

It's A Fun Treat

Nighttime visits to Bonesville can get so routine that it ends up being about as sexy as scrubbing off that perfect cat eye (i.e., not at all sexy). At least in the beginning, a nice a.m. sheets sesh feels like you got away with something. And that something is some wicked morning delight.

It's A Great Equalizer

You and your partner are different. Your days, schedules, and stress levels are rarely ever going to be identical, which means you're likely to have mismatched energy levels by the end of the day. It doesn't seem fair that you have to be zonked out from an exhausting day at work while your S.O. is chipper as fuck because they had the day off. Getting your freak on in the morning offers a level playing field, assuming that both of you got a decent night's sleep. "The biggest problem for couples is just that they’re so darn tired at the end of the night," Dr. Walsh says. "So catch it while the day is bright and you’re rested ... You don’t have to get dressed up. There’s no pressure to look good, perform — you just wake up."

Just be certain you remove your TMJ mouth guard before rolling over. (Sorry, I'm sure that hit a very real spot in some of you.)

The Lighting Is Way Flattering

Sure, you're still a bit out of it and less self-aware than normal, but the fact remains: When the sun hangs low in the sky, its light becomes diffused and softens. The "golden hour" is an actual thing that exists. It happens twice a day, once during the last hour of light before sunset (likely when you're still at work, possibly enjoying a sad desk salad) and again the first hour after sunrise. I think we know the more realistic option between the two, if you're looking to get sexy with the most help from nature's dimmer switch. You can actually find the specific golden hour where you live, and plan accordingly for extra gorgeous grinding.

It's funny how many people I spoke with didn't identify as morning people, but will get up earlier than their alarm if it means a good orgasm or two. Even if you consider sleep a most holy gift (and you're not wrong), you probably don't have a great reason to not give morning sex a go. "Everyone should try it and see whether they enjoy, and if they feel whether it starts their day off nicely," sex therapist Dr. Ross L. Tabisel advocates. "Some people like morning sex better than night sex—they’re tired at night, and in the morning they feel much better. Women and men should be willing to try everything, as long as it’s consensual. There’s no reason not to try it."

More like this
20 Things You Should Never Tolerate In A Relationship
By Rachel Sanoff and Kathleen Ferraro
The Best Time To Date After A Breakup, According To Experts
By Bustle Editors
Are Quality Time & Physical Touch Love Languages Compatible?
By Lexi Inks
12 Ways You're Sabotaging Your Love Life
By Teresa Newsome and Lexi Inks
Get Even More From Bustle — Sign Up For The Newsletter