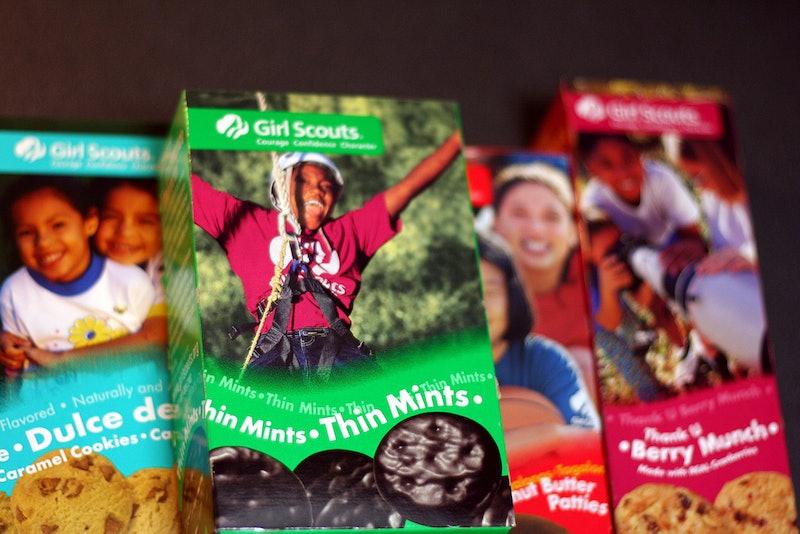 Well, Girl Scout Cookie fans, I’ve got some good news and some bad news for you. The good news is that there will be two new Girl Scout Cookie flavors debuting during the 2015 cookie-selling season — but the bad news is that if you live in the Los Angeles area, your beloved baked goods will cost you a little more than they did last year. Sorry, Angelinos. But hey, at least you can buy them online now, right?

This year’s new flavors bear the names Toffee-tastic and Rah-Rah Raisins. As you might expect, Rah-Rah Raisins are an oatmeal raisin treat; lest the choice seem a little boring to you, though, know, too, that they get a little extra kick from some Greek yogurt chips. The butter-based Toffee-tastic cookies, meanwhile, include crunchy little toffee bits — although you’ll have to act fast to get ‘em: They’re gluten-free, and they’ll only be available “in select Girl Scout council markets for as long as supplies last.” I get the feeling they’re functioning as something of a trial run for future gluten-free cookie options, so maybe if they do well enough, they’ll return next year in greater numbers. It’s probably worth noting that two of the older flavors have seemingly been phased out in favor of the new ones; as Food Beast points out, the Dulce de Leche and Thank You Berry Much cookies are no longer listed in the official Meet the Cookies lineup on the Girl Scout website.

This isn’t the first time the Girl Scouts have sold an oatmeal raisin variety; once upon a time, they peddled Snaps, which boasted a layer of icing in addition to the expected oatmeal and raisins. Other retired oatmeal treats include Cartwheels, a reduced fat, cinnamon spiced variety; Pinatas, which came with a fruit filling and a cinnamon glaze; and Upside-Down Oatmeal, so named for the fact that their layer of frosting lay on the bottoms of each cookies, rather than being spread across the top. As far as I know, though, Toffee-tastic marks both the first time toffee has been used as a Girl Scout Cookie flavor profile, as well as the first gluten-free variety the organization has ever produced. Onward and upward, eh?

As for the price hike, what we know is this: Boxes of cookies sold in the LA area will cost $5 this year, up a dollar from last year’s price of $4. Northern California saw a similar rise in price in 2014, so the move isn’t unprecedented; according to the San Francisco Business Times, the previous hike can be attributed to the fact that, like everything else in California lately, “the cost of doing business has gone up.” This includes things ranging from the baker’s fees to the amount of money required to keep the organization’s facilities up and running. Oh, and for the curious, the Toffee-tastic cookies will also cost a little extra — $6 a box — because of the “expensive nature of the ingredients, separate baking process, and additional distribution costs.”