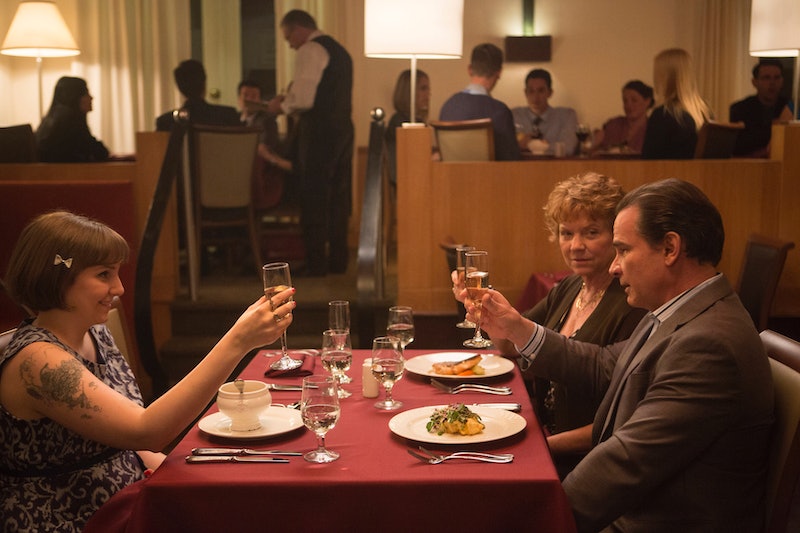 The fourth seasons of Girls debuts on HBO on January 11. That's perfect timing to make some New Year's resolutions for the ladies of Girls . After all, these characters have a lot to work on in the self-improvement arena.

On the other hand, getting the girls to clean up their lives almost defeats the purpose of the show. The greatest thing about Girls is that it captures a brief window of life when it's okay for people to be total messes. And flawed characters are more interesting, and these people are nothing if not flawed. Having Hanna, Shoshanna, Marnie, and Jessa be the type of people who immediately break all their New Year's resolutions is pretty much what makes the show worth watching.

On the other hand, if they were my friends, I'd want to grab them by the shoulders, shake them, and scream some advice into their faces. I mean, being flawed is one thing, but making the same mistakes over and over is something else. They just need a wake-up call, and, since I can't give them one in real life, I'm going to do it here. Here's the New Year's resolutions I bestow on the girls of Girls.

Hannah: Finish Something — Anything — Dammit!

Hannah Horvath is a serial quitter. She quit her well paid advertorial-writing job for GQ — and lost her job at the law firm before that, and quit her publishing internship before that. It's not totally her fault that her ebook didn't see the light of day, but that's another Hannah project that didn't make it to completion. And she's not just a professional quitter, either, since she keeps stopping and-restarting her relationship with Adam. My resolution for Hannah: For the love of God, finish something. I know that it's way too much to expect her to complete the program at the Iowa Writer's Workshop — one of the most prestigious writing programs in the country, and one I fully expect her to quit — but maybe she can stick it out long enough to actually write and publish something.

Shoshanna: Give the Guys a Break

There are some places in live where being a determined, organized, and driven person help, and some places where it hurts. Romance is the latter. To paraphrase The Supremes: You can't micro-manage love. So laying out a set of expectations for amounts of time spent together, communication, and snuggling, like she did with Parker (you know, the guy she said was so stupid she'd be afraid their kids wouldn't get into preschool), is out. My resolution for Shoshanna: Just let love happen, like it did with Ray. Only with someone she doesn't feel sorry for like a monkey.

Marnie: Own Your Singing or Don't Do It

Marnie isn't afraid to take risks — and then be totally embarrassed by them. This goes double for her singing, where she feels brave enough to sing "Stronger" at Charlie's party or release the "What I Am" video, then cringes whenever they're brought up. My resolution for Marnie: Stop doing that. Just own it. It'd be less uncomfortable for everyone involved if she didn't get so defensive about her performances, even if they are awful. If Allison Williams can own it for Peter Pan Live, Marnie can do it for her own singing.

Jessa: Is There Any Point?

More like this
22 Movies On Netflix That Are Perfect For The Whole Family
By Bustle Editors
We’ve All Had Bad Sex. Nona Willis Aronowitz Is Talking About It.
By Sophia Benoit
It’s Official: 'The Bachelorette' Is No Longer A Fairy Tale
By Samantha Allen
Beyoncé & Madonna’s “Break My Soul” Remix Honors A Group Of Black Icons
By Stephanie Topacio Long
Get Even More From Bustle — Sign Up For The Newsletter