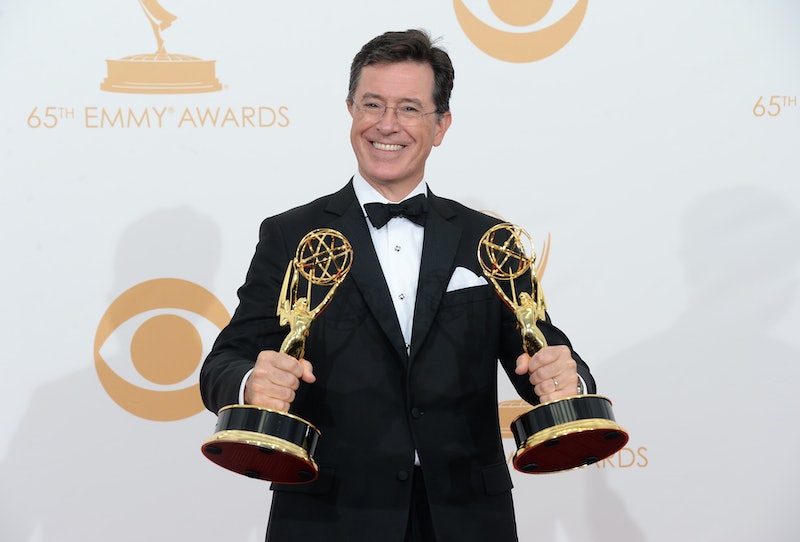 At last night's super somber Emmy Awards ceremony, one funny man finally got what he deserved — Stephen Colbert's The Colbert Report finally beat Jon Stewart's The Daily Show for Outstanding Variety Series. It's been 10 years since anyone has beaten Jon's show, and it's about time he was overthrown. He's not the only funny satirist in town! Here are 10 reasons why Colbert definitely deserved the win:

1. Stephen Colbert is perhaps the greatest performance artist of all time.

Stephen Colbert has two Wikipedia articles — one for himself, the real Stephen Colbert, and one for his character on The Colbert Report, officially named The Rev. Sir Doctor Sen. Stephen T. Mos Def Colbert, D.F.A., Heavyweight Champion of the World**, Ph.D.. His persona as a mock right-wing conservative pundit is so brilliant, that it still goes over some people's heads. In fact, in 2009, a poll showed that BOTH liberals and conservatives thought that Colbert was in their camp. He's the ultimate satirist and trickster. If there were a "Modest Proposal" of people, it'd be Colbert.

2. He started a real SuperPAC that raised a lot of REAL money.

In 2011, Colbert started the Super PAC named "Americans for a Better Tomorrow, Tomorrow." He began the "organization" when the chairman of the Federal Election Commission, Trevor Potter, was a guest on his show — Potter even walked him through filing the papers! The ColbertSuperPAC raised more than a million bucks and Colbert even got a Peabody Award for teaching the American people about, you know, what a Super PAC really is, which basically boils down to a money dumping ground for anyone who wants to run for office. Teaching complex political concepts... through humor! Thanks, Stephen.

When he accepted his award last night, Colbert thanked his "brother and friend" Jon Stewart. GUSH. I know a lot of people love the bromance between Aaron Paul and Bryan Cranston, but my favorite show biz relationship has to be that of Colbert and Stewart. Friends til the end! Stewart gave Colbert his start on The Daily Show, and they're just so proud of each other, and they just want each other to succeed. It warms my heart (and I say this without a hint of satire).

4. The Colbert Report is hilarious, but also poignant.

Colbert consistently offers wonderful segments, like this installment of "People Who are Ruining America" which features Johhny Cummings — the mayor of Vicco, Kentucky who is openly gay. Just watch and cry.

5. He's the only human being with a NASA treadmill named after him.

Not sure how relevant it is to his Emmy win that a treadmill on the International Space Station is named after Colbert, but... it's still impressive.

You're lying if you don't know the word "truthiness."

Very rarely does Colbert break character, but he did this summer to pay tribute to his mother, Lorna Colbert. Again, watch and cry. (Apparently Colbert makes me cry a lot.)

Okay, so apparently Daft Punk didn't cancel last minute on Colbert's show. But are you mad? Even though it was a publicity stunt, we still got to see Colbert dance, adorably.

Yes, Stephen Colbert is a brilliant actor OR actual egomaniac conservative pundit. But he's also got a penchant for music and musical theatre, and he loves to perform. It's pretty fantastic when he invites his famous musician friends or heroes on the show and fanboys all over them, like when he had Sir Paul McCartney on last December.

Come on... a show that is so keenly satirical, that republicans think it's real? A comedian/actor that actually runs for president? Stephen Colbert is the perfect combination of hilarious and brilliant, so a tip of the hat to him for winning an Emmy, finally, for his show! And a wag of the finger to the academy for not awarding him one earlier. Bonus reason: Ben and Jerry's Americone Dream.