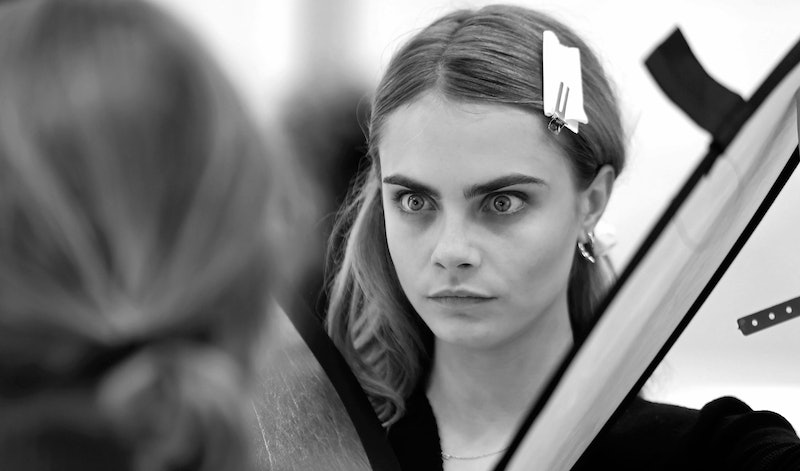 I'm not sure when I first heard someone describe something as "on fleek." Maybe I saw it on Instagram in a comment. Maybe it was in an article talking about Cara Delevingne's eyebrows (my best bet is on that option). Or maybe it was just in a conversation I overheard on my college campus. Whatever the case, I was confused. What is truly confusing about the phrase is the fact that "fleek" is not a word. And it doesn't even really sound like a word. It just... exists. But regardless of whether it's a word or not, it's cool. Granted, maybe most people are using "on fleek" ironically rather than seriously, but still... it's trendy. And I, for one, would just like to admit that I have no idea what the heck it means. Where did it even come from?

As a hard-hitting journalist, I take it upon myself to research such cultural issues. Hey, I write things — often things concerning fashion and eyebrows and other things that could be described as on (or off, I guess) fleek. Why not look into where the phrase came from? So from what I've gathered, here's where "on fleek" originated, what it means, and how it's used.

The oldest usage I could find of the term was described by People as its listing on Urban Dictionary as early as 2003. According to that entry, "on fleek" means "smooth, nice, sweet." However, the term really didn't pick up in popularity until this year, 2014.

As most modern cultural trends go, "on fleek"'s current popularity apparently came out of social media — Vine, to be exact. Now, how six-second videos translated into one phrase being used to describe everything from clothes to hair to eyebrows... that is a mystery. Just throw it into the same category of Kim Kardashian being famous and wealthy for her butt: No, it may not entirely make sense, but we all just kind of go with it anyway.

One such video was posted by "Peaches Monroee" in June, and, well, good luck figuring out exactly what it's describing. From the looks of it, Peaches is heading somewhere in the car and is about to party, and her eyebrows are on point (an important factor for an occasion of any kind). But instead of saying "on point," she just says "on fleek." And voila, slang is born.

As you can see from the video and the general use of the word, "on fleek" means that something is on point, essentially — that something looks good, is perfectly executed, etc. It's just another way to compliment someone else... or yourself. Why not?

I mentioned this earlier, but basically this question goes back to why anything goes viral on the internet. It just does. There's no real rhyme or reason to it. Celebrities certainly help its popularity grow, though. Enter Ariana Grande, who did her own little rendition of the Peaches Monroee Vine — and, well, it's pretty fun:

Naturally, Taco Bell wasn't about to let a trendy term go untouched — the fast food chain's social media presence is pretty on fleek itself, if you haven't noticed. They're funny, cool, and know what's going on with their main demographic, the youths.

From there, pretty much everyone (including Kim Kardashian) decided to start hashtagging #onfleek when relevant — or, OK, probably when not relevant, too. It doesn't really matter. It's just fun to say.

A quick search of the #onfleek hashtag on Instagram revealed that more than 86,800 posts included it. The photos range from everything from makeup photos to selfies to a bacon sandwich. Yes, a bacon sandwich. There's a little bit of everything to say the least — proving that "on fleek" can apply to whatever you want. Ah, the beauty of a word with no true meaning.

So there you have it, my friends. The brief history of "on fleek," as told by celebrities and Vines and clever brand marketing. Still a little confused about the whole thing? Me too. But let's just go with it, shall we?

More like this
Confused About Blush Placement? This TikTok Makeup Hack Will Help
By Olivia Rose Ferreiro
The Pros & Cons Of The "Moisture Sandwich" Trend, Explained By Derms
By Olivia Rose Ferreiro
Why TikTok Is Flooded With Controversial Videos About "Pick Me Girls"
By Courtney Young
This TikTok Song About An Unrequited Romance Has FYPs In Shambles
By Emma Carey
Get Even More From Bustle — Sign Up For The Newsletter