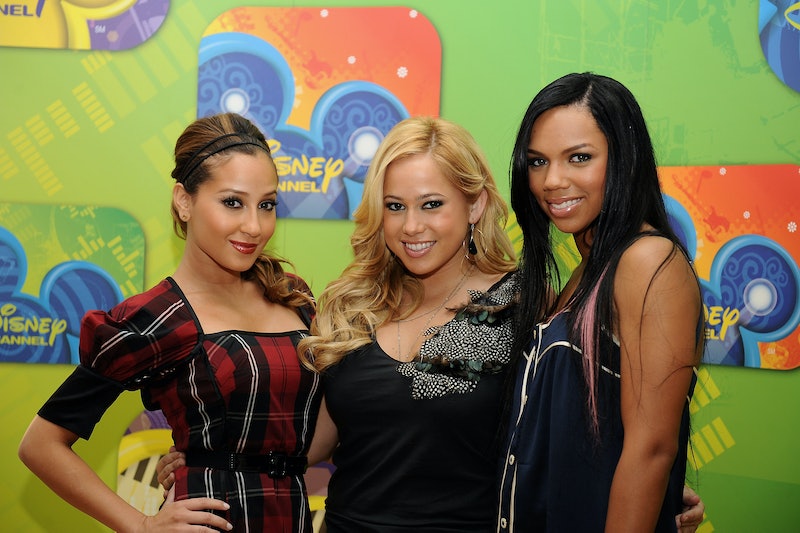 As we cross over to 2015, it seems fair to say that 2014 was the year of reminiscing. Veronica Mars returned with a new movie funded by Kickstarter; Friends celebrated the 10-year anniversary of its finale and the 20-year anniversary of its premiere; Mean Girls turned 10; we saw the triumphant return of Gilmore Girls on Netflix; and there was the Boy Meets World spin-off about Cory and Topanga's daughter, Girl Meets World. ABC Family aims to continue the trend by celebrating 2014 with "That's So Throwback," an event featuring episodes of classic Disney Channel shows like Lizzie McGuire and Even Stevens and iconic Disney Channel original movies like the ridiculously entertaining The Cheetah Girls. Which made me try and remember: Were the Cheetah Girls a real band?

You remember The Cheetah Girls. The film followed a four-member girl group on their way to success and it was the best. But here's what I always wondered if the girls were really touring the country singing "Strut": It turns out there was a real Cheetah Girls band, but differed a bit from the one in the Disney Channel Original Movies.

The Cheetah Girls originally began as a book series that began in 1999 and after the movie based on the series became a monster hit (because why wouldn't it?), the group became a reality thanks to three of the four Cheetahs from the DCOM: Adrienne Bailon, Keily Williams, and Sabrina Bryan. The band leader from the film Raven-Symone was already obligated with her solo career and her show That's So Raven to be in the group but the three ladies killed it with two more movies (one of which did feature Raven again), and two hit albums including their Christmas album Cheetah-licious Christmas, aka the best name for a Christmas album ever.

The Cheetah Girls disbanded in 2009, sadly, but there are still great ways to enjoy their legacy — like watching the the ABC Family airing of their first flick. In celebration and anticipation of The Cheetah Girls movie on "That's So Throwback," here are some of TCG's most memorable moments:

Can anyone pull off those colors with cheetah print? Never ever. But this is what these girls were known for back in the day. They must have borrowed Tina Knowles away from Destiny's Child for these numbers.

"Our spots are different/ Different colors/ We make each other stronger/ That ain't ever gonna change/ We're cheetah girls, cheetah sisters."

One of my favorite things about The Cheetah Girls was Galleria's attitude about the band's brilliance. Because if anyone can pull off attitude that can be empowering and annoying, it's Raven-Symone.

Their Trip to India

In the third movie of the series, when The Cheetah Girls band was at the peak of their real-life popularity, the girls filmed a movie where they traveled to India to perform. It was a giant mess in a lot of ways. But it was also completely entertaining to watch them try and meld their sound with Indian music. As an Indian-American, I was truly engrossed.