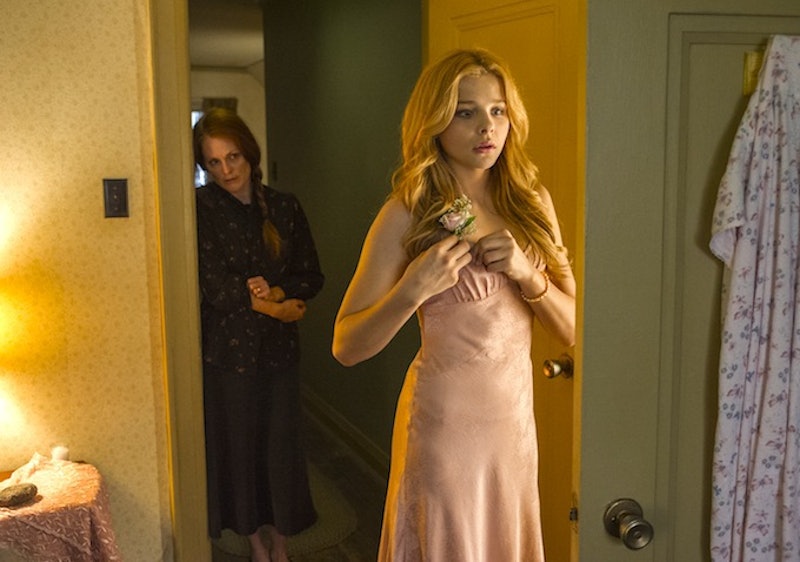 Since it was announced, it hasn't been clear whether or not the new Carrie remake will be a project worth spending time watching. The cast, with Chloë Moretz and Julianne Moore headlining sounds great, but horror movie remakes are seldom watchable even with excellent talent in the cast. In the case of Carrie, however, this luckily doesn't seem like it's going to be the case — a trailer released a month ago showed promise, and these new teasers only affirm that even more.

The cherry on top: Apparently, the film is going to be rated R, so they won't be skimping on the gore, or the cursing. Just how a horror movie SHOULD be.

Anyway, about the trailers: In the first one, a 30-second TV spot, we see a lot more of Carrie tearing shit up with her telekinetic powers after some cruel students at her high school dump pig's blood on her at the prom. Moore looks just the right amount of creepy to play Carrie's religious, abusive mother, and Moretz brings a sort of innocence to the role that Sissy Spacek nailed in Brian De Palma's 1976 version.

The second video is the longer Japanese trailer, which gives us a better look at the entire film, and just how desperately Carrie wants to fit in with her fellow classmates before the pig's blood prank. We also get a glimpse of Judy Greer as a concerned teacher at Carrie's school, which is great because it's always a nice surprise to see Judy Greer pop up in movies.

You can check out the trailers below. Carrie, which is being directed by Boys Don't Cry director Kimberly Peirce, will be released nationwide on Oct. 18 — just in time for Halloween.

More like this
North West Will Make Her Acting Debut Alongside Mom Kim Kardashian
By Radhika Menon
How To Stream 'To Leslie'
By Radhika Menon
Bennifer's Relationship Timeline Now Includes A Grammy Date Night
By Jake Viswanath
What Is Mary J. Blige’s Net Worth? The 9-Time Grammy Winner Is Doing “Just Fine”
By Hugh McIntyre
Get Even More From Bustle — Sign Up For The Newsletter
From hair trends to relationship advice, our daily newsletter has everything you need to sound like a person who’s on TikTok, even if you aren’t.