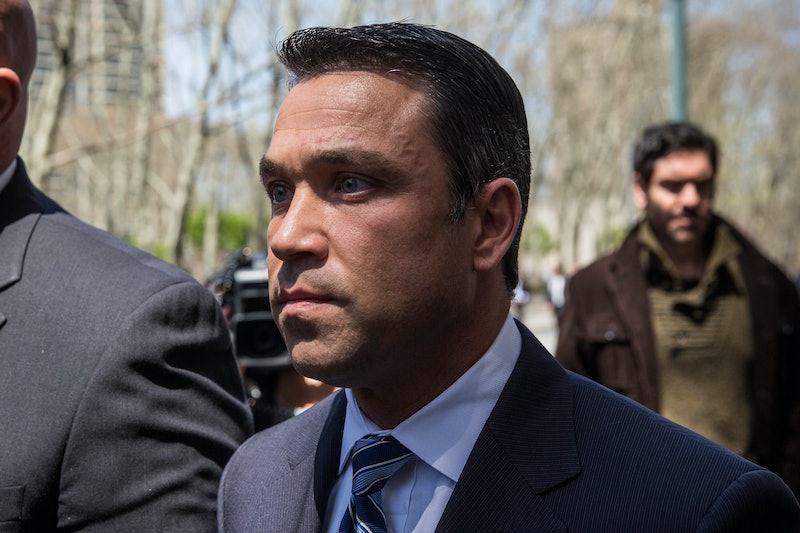 Embattled U.S. Congressman Michael Grimm (R-N.Y.) resigned on Monday after pleading guilty to tax evasion — a felony offense that carries a maximum of three years in prison. Grimm formally announced his resignation after reportedly discussing his options with House Speaker John Boehner. The Republican, who represents Staten Island and a small part of Brooklyn, has come under fire for his campaign financing and unpaid taxes, ultimately leading to his indictment in April.

After entering his plea in federal court in Brooklyn on Dec. 23, Grimm told the media he wouldn't be leaving his post in Congress. "As of right now, I’m still in a capacity to serve, and that’s exactly what I’m going to do," he said on the court house steps last week.

But on Monday, Grimm said in a statement that he would be stepping down by Jan. 5, 2015. The "very difficult" decision took "much thought and prayer," the congressman said:

This decision is made with a heavy heart, as I have enjoyed a very special relationship and closeness with my constituents, whom I care about deeply. ... The events which led to this day did not break my spirit, nor the will of the voters. However, I do not believe that I can continue to be 100% effective in the next Congress, and therefore, out of respect for the Office and the people I so proudly represent, it is time for me to start the next chapter of my life.

Although it's been reported that Grimm and Boehner talked about the embattled congressman's future, a spokesperson for Boehner's office refused to comment on Grimm's recent troubles to the Associated Press. "We do not discuss private conversations the speaker has with members," Boehner spokesperson Michael Steel told the AP.

Meanwhile, House Minority Leader Nancy Pelosi (D-Calif.) has been publicly calling for Grimm's resignation. Prior to Grimm's appearance in federal court on Dec. 23, Pelosi released a statement criticizing the congressman, according to The Hill. "Now that the election is over, Congressman Grimm is finally admitting the truth to his constituents," Pelosi said in the statement. "Clearly, Speaker Boehner must insist that Congressman Grimm resign immediately."

Grimm, who served as an FBI agent before running for political office, was initially indicted on 20 counts, ranging from tax evasion to lying under oath, according to court documents. The congressman was found guilty for hiding more than $1 million in wages and receipts at a restaurant he owned in Manhattan. The court documents found that Grimm often paid his employees, many of whom were undocumented immigrants, "off the books," and under-reported the restaurant's receipts.

A rising star in the Republican Party, Grimm's resignation comes as a blow to conservatives in both New York City and New York State. As the representative for Staten Island and southern Brooklyn, Grimm was the only New York Republican in Congress with the most sway and influence, holding his own in a largely Democratic state.