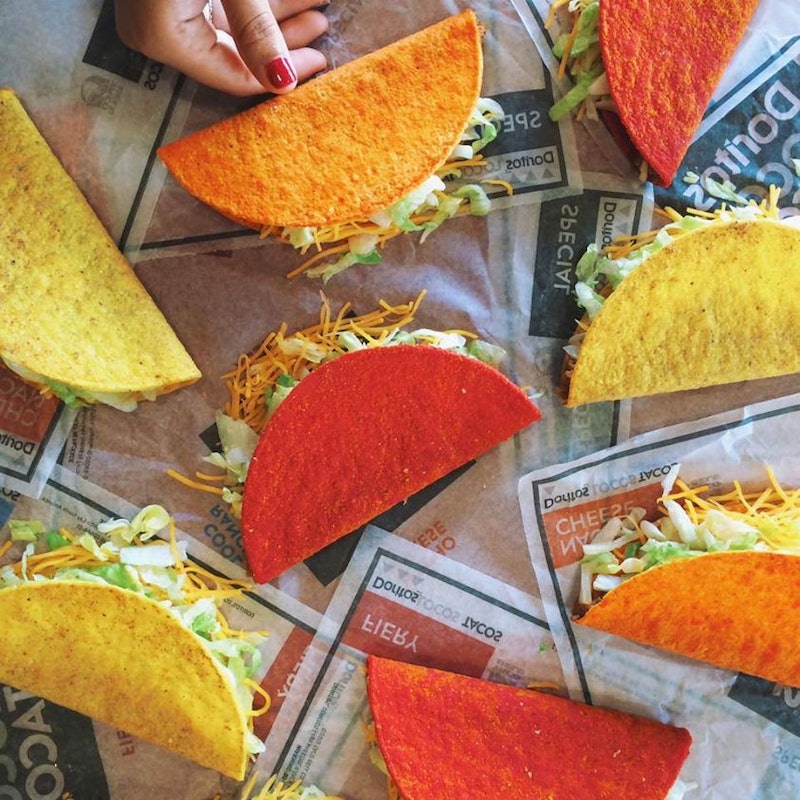 What’s the only thing better than tacos? Free tacos, of course — and happily, there’s at least one fast food chain who’s willing to oblige: Taco Bell is reportedly giving away free Doritos Locos Tacos throughout the month of January, so hurry on down to your friendly neighborhood ‘Bell location to indulge in some cheesy, terrible-for-you deliciousness.

According to Food Beast, the free taco offer is part of a promo meant to drum up interest in Taco Bell’s mobile app. Here’s how it works (don't worry, it's super simple): At participating Taco Bell locations, all you need to do is place an order through the Taco Bell app. With each purchase made, you’ll be entitled to one free Doritos Locos Taco. You’ll probably want to take advantage of the deal sooner, rather than later, though; QSR Web reports that it’s a “while supplies last” kind of thing and will only be available until the chain hits the one million taco mark. I mean, that's a lot of tacos — but let's just say you should never underestimate the effect the words "free tacos" can have on most people.

Taco Bell has recently hit some landmark numbers for both the Doritos Locos Taco and their order-ahead, pay-on-the-go app; as of December 11, 2014, the chain had sold a whopping one billion Doritos-dusted tacos, and the app has just met the 1.4 million download mark in the iTunes and Google Play app stores. Congrats, you guys!

I can’t say I’ve ever too invested in either, but I guess something must be working, right? Fast food-based mobile apps in particular have been on the rise lately; Yahoo! Tech’s Rob Walker wrote back in November that app stores are basically “one Wok ‘n Roll away from being a megamall food court.” Go on — take a look at your app store of choice’s Food and Drink section. It’s full of ‘em, isn’t it? Add to that the fact that places like Taco Bell, Starbucks, and more have been running some pretty amazing-sounding promos geared towards increasing the usage of the apps lately, and, well… you do the math.

Anyhoo, if there is no phrase in the English language more beautiful to you than “free Doritos Locos Tacos,” download the app, head on over to Taco Bell, and give the whole thing a whirl.

Hmmm. Maybe I should rethink my dinner plans for tonight…

More like this
Pret & Costa’s Coffee Is The Strongest On The High Street, According To Which?
By Sam Ramsden
16 Valentine’s Day Quotes About Chocolate That Will Make You Hungry
By Emma Cueto
Dunkin’s Valentine’s Day Lineup Includes A Drink That Tastes Like Dessert
By Alexis Morillo
15 Black-Owned Liquor & Wine Brands To Add To Your Bar Cart
By Alexis Morillo
Get Even More From Bustle — Sign Up For The Newsletter
From hair trends to relationship advice, our daily newsletter has everything you need to sound like a person who’s on TikTok, even if you aren’t.