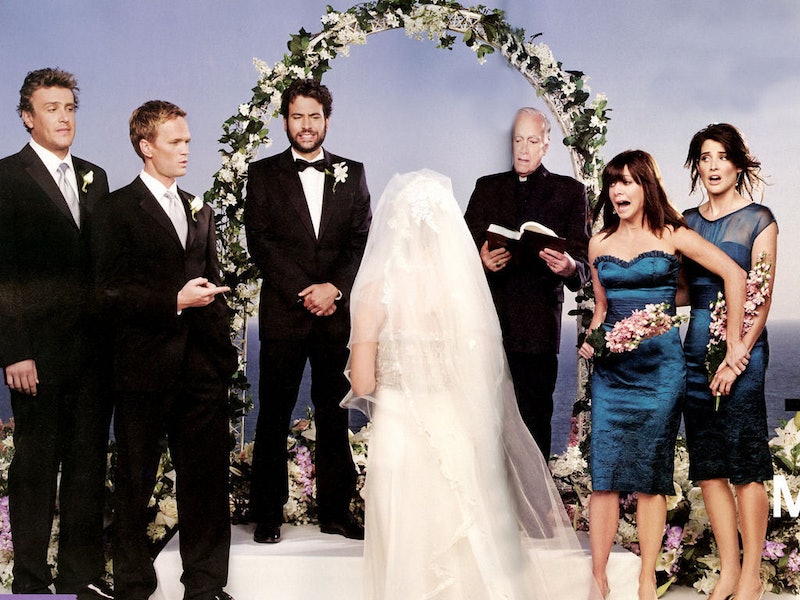 It's in the final scene of last night's two-part season premiere that I felt, for the first time in a long while, How I Met Your Mother firing on the romantic comedy cylinders it once used to great effect. It's a year in the future, and Ted is meeting the Mother (Cristin Milioti), or here his girlfriend, for a relaxed drink. Their banter is fun and believable -- her joking about the pastry that found its way into her cleavage, Ted poking fun at his crossword puzzle obsession. The Mother (still nameless) tells Ted she imagines him sitting at that table a year ago, the old Ted struggling to make sense of his life. He's there, right there, because that's what we'd been watching up to this point -- Ted at the Farhampton Inn, just hours into Barney and Robin's wedding weekend. The juxtaposition between the two Teds is striking. Future Ted tells the Mother he's got to check on the status of their room keys. "I'll be right back," he tells her. "I'll be right here," she responds.

Is this world-class writing? Not necessarily. But that brief interaction, maybe three minutes of screen time, gives a tired yet devoted HIMYM fan base its strongest indication yet that this show may just stick the landing in its final season. There's no getting around it -- much of the past three seasons has sucked, a series of unimportant plot detours that may have offered a nice moment or two but that ultimately, and for Ted especially, kept things stuck in a sea of "who cares?" We knew none of the women Ted dated would be the Mother. We knew that any "big" conflicts would be resolved in the span of a few episodes. So why bother investing?

Now we're sort of kinda at the finish line, just 22 episodes left, and you can already feel the writers taking this season as an opportunity to really go for it. Much of the season, we've learned, will take place (at least in the present) at the wedding of Barney and Robin. If that sounds like '24: The Rom Com'…well yeah, it sounds like '24: The Rom Com'. But the palette Carter Bays and Craig Thomas can draw on over this season is actually pretty expansive. As evidenced tonight, (TV) weddings provide a chance to bring back favorite guest stars. First we had Wayne Brady, playing Barney's recently divorced brother (it's complicated). We'll soon be treated to John Lithgow, Frances Connor -- who knows, maybe Katie "Slutty Pumpkin" Holmes will make a brief visit to throw a wrench in the works. In any case, the setting and emotional terrain lend themselves to a potentially interesting season.

But you want to hear about the Mother, right?! Okay! Let's talk about her! We met her at the tail end of last season, purchasing her train ticket to Farhampton. Tonight we caught up with her on that train, where Lily befriended her and we learned a few key things:

2) She's not afraid to engage Lily physically when attacked, an important skill as any 6th member of the gang must be able to stand up to senior members.

3) She thinks Lily's description of Ted is less than perfect, but secretly admires his driving sensibilities, need for vocabulary-based validation, and more.

4) Also she looks a ton like Alyson Hannigan, which better not be a plot point later on.

All in all, not an inauspicious start to this new year in the world of slap bets and time traveling romance. If tonight's Mother scenes are any indication, Bays and Thomas know exactly the target they're shooting at. And I think they're gonna hit it.