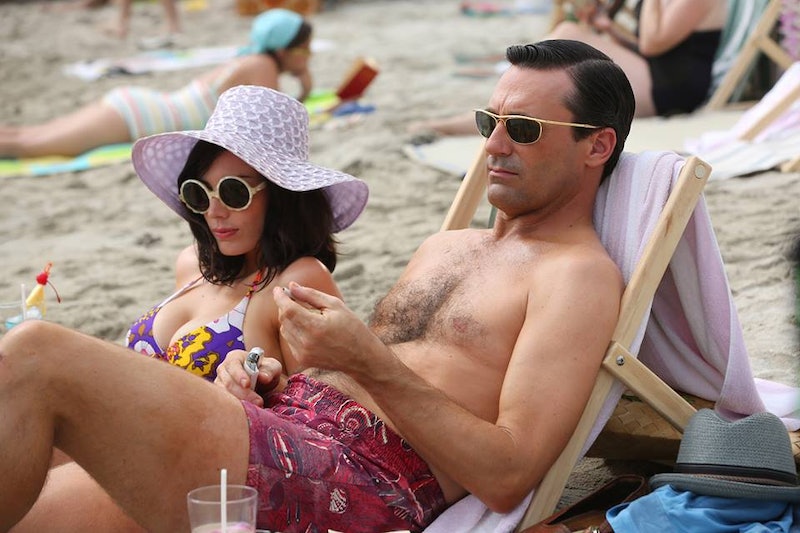 Do men experience stronger sexual impulses and desires than women do? A new study from the University of Texas at Austin says yes — and that this can explain why men in relationships are more likely to cheat. According to the researchers, men and women exhibit similar levels of impulse-control or self-restraint. But men ultimately fail at fidelity more because their sexual urges are just so much stronger.

Oh boy ... I admit, my first impulse was to find reasons to pick this study apart — and I've never been good at impulse control. I also reject on premise that social phenomenon like cheating can be explained by fundamental gender differences and not cultural conditioning. Luckily, the researchers made finding fault with their study easy. Really easy. Are you ready to wade through their bullshit with me? Let's go!

The first thing to note is that the researchers did not start out neutral. Their hypothesis from the get-go was that men's lust is more intense than women's. As evidence, they point to previous studies showing men are more likely to cheat than women. Men have also shown more likely to go after "inappropriate" mates.

To test out their hypothesis, they first asked men and women to self-report on a time when they had lusted after someone inappropriate. Participants were also asked to rate strength of the sexual arousal and temptation they experienced, because everyone knows that memories and self-reports are incredibly reliable.

In a follow-up experiment, undergraduates were shown a series of photographs of attractive or unattractive partners and asked to “accept” or “reject” each potential mate. However, there was a twist: Some partners were designated as people who were "good for you" and others as people who were "bad for you." Participants were told to accept only good matches and reject all bad partners.

The results? In the first portion, men were more likely than women to say they felt strong sexual impulses and that they had acted on those impulses. In the second portion, male students proved more likely to linger on attractive-but-bad partners before rejecting them and to impulsively "accept" a partner they were supposed to reject.

Let's take a moment to think about possible explanations for these results. When it comes to the self-reports, it seems like some social desirability bias could be at play. After all, women are taught from birth that having strong sexual urges is wanton and unladylike. It's well-known that women are likely to underplay sexual experience while men are likely to over-report.

But let's say all the participants totally accurately reported their pasts, and the male students were really more likely to have slept with sexually inappropriate people. Does this necessarily mean their urges were stronger? The researchers themselves acknowledge that:

"The contemporary social repercussions of succumbing to a sexual temptation are more severe for women than for men. People rate women as more responsible for infidelity than men ... and women are also socialized to perceive more sexual risk than men."

Women actually do experience more sexual risk than men, too, both in terms of pregnancy and sexual assault. And when it comes to inappropriate people (like friends' exes), there's a stronger taboo against women doing this sort of thing.

As for men lingering longer on attractive faces: The researchers admit there perhaps men "were more attentive to the physical attractiveness of the opposite-sex (photos)," and that's what caused them to take longer to respond (not stronger sexual desire). We also know that women are better at/more culturally conditioned to follow directions, especially when they come from authority figures.

Just to recap here: Women have been raised with stronger encouragement not to have non-relationship sex in general, not to have sex with anyone a friend previously has and not to cheat. They're looked down on more than men when they do cheat, and face greater social ostracization. They also face more danger from sexual encounters and are encouraged to talk about such encounters less. It's almost as if women have stronger incentives to avoid cheating, regardless of how strong they might lust after someone!

Meh. Men said they felt stronger sexual urges; that must make it so! And they looked at pictures of pretty girls longer! In conclusion, men can't help but give into temptation more because its hard-wired in them. "In summary, men appear to be more likely to succumb to sexual temptations because they experience stronger sexual impulses than women," the researchers conclude.

More like this
Are Quality Time & Gift-Receiving Love Languages Compatible?
By Lexi Inks
The 19 Best Tweets & Memes About Bisexual Awareness Week
By Lexi Inks
10 Creative Sexting Ideas That Don't Involve Nudes
By Lexi Inks
How To Set Rules If You're In An Open Relationship
By Lexi Inks
Get Even More From Bustle — Sign Up For The Newsletter