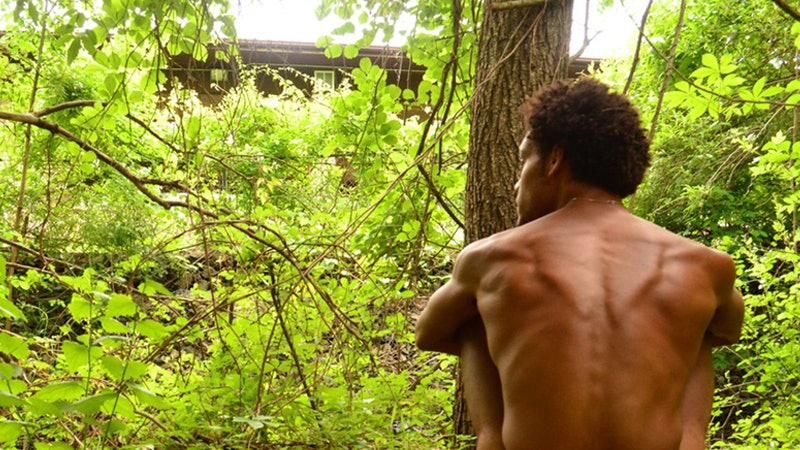 Let me just start by saying this: Up until this point (and hopefully for at least a little while longer), I've led a relatively charmed life. I grew up with lots of love and emotional support from my single mother and the rest of our family; with a roof over the top bunk of the bed I rested my head on well into my teenage years; with a warm meal delivered to me almost every night from the diner my family continues to own to this day; and blessed with every new video game system as soon as it hit the market — a big deal for a family of softcore gamers. But relativity will always be a slippery slope, and a charmed life doesn't come without a curse or two to keep the magic alive and the blessings counted. My curse? Growing up in a place where I was considered "exotic" by almost everyone. In other words: Being mixed isn't all vanilla-chocolate-swirls or Uh-Oh Oreos.

Where I grew up, most lives were led in a similarly charmed manner. Where I grew up, most lives were also white. In Lacey Township, NJ — a small conglomerate of towns that added their populations up to hit a whopping 25,000 residents — I could count on my hands how many black families paid their taxes (an extremely low percentage of diversity that was roughly equal to that of any other minority's presence in the area). Keeping that in mind, I was also raised solely by a white mother: My black father had been [rarely in, but for the most part] out of the picture for a long time, which gave our family's frame an unusual shape to go with its already unusual coloring. People were surprised to see my mother alone with three dark-skinned children, but — and I believe this is especially because she was white — they felt comfortable enough to make comments to her (and eventually, as we got older, even to us) about our more "exotic-looking" features. That's how I was first introduced to a crazy little thing called microaggression, or — you know — unintentional discrimination.

The funny [yet very sad] video above displays a specific type of relationship with microaggressive personalities, but there are many different types of microagression. Some of them stem from institutionalized socioeconomic superstructures of oppression; others just stem from ignorance (in the most objective sense of the word). Yet an indecent amount of them are intrinsically related to concepts of physical appearance and standardized ideals of beauty that — for a multitude of reasons that I cannot fathom — the majority of people find themselves most comfortable to speak on. And when it comes to someone who's biracial, this majority is a particularly large one, because mixed race people are a special kind of minority: A minority even among the minorities. Being of a mixed race has made me a prime target for microaggressions from all sides of the [unfortunate] racial divide, and because of this, every genetic feature of my physical make-up has at one point or another received a back-handed compliment; one that has always been attributed to the darker side(s) of my heritage — as if to say, "Look! You got all the good-looking parts of blackness," or, "The life you're being forced to live in racial 'No Man's Land' couldn't be all that hard because you're like, really pretty."

But even if they were to use the word "pretty," that's not what they would mean. They're equating my beauty to that of a foreign object that has features they see only in rarity, if ever at all; even if they don't use the word (and believe me, they use it quite often), they're calling me "exotic." My appearance has always been the focus of exoticized objectification, and in certain ways, I have come to accept that, because it comes with the role I was born into — as someone both "black" and "white" in an "innocent until proven racist" society. But when being exotic is as beautiful as you'll get, you're bound to have a few grievances when you look in the mirror, and — even though I know you didn't ask — I'm gonna tell you them anyway. So, please just hear me out as I give you a few examples of things that have been said to me that I really wish hadn't been... true stories of microaggressions against my physical beauty that have made me question my self-worth more than just once.

"Oh my god, your hair feels so weird!"

THIS... First off, I don't know how to reply to this outside of a noncommittal shoulder shrug and half-hearted smile. I'm sorry? Thank you? You're welcome? I don't know how to handle this comment even after hearing it 50+ times. Also, do you realize that you're alienating me right now by treating me like some sort of zoo animal? But most importantly, do I even know you? If I do: Don't say this to me. I like you enough that I'm letting you touch my hair (though, I must admit, I do have a thing for hair play in general). If I don't: What do you think you're doing? No, it's not OK to touch my hair if I don't know you, stranger. You didn't even ask.

"God, you have the PERFECT skin!"

Like, you'd totally kill to have my color without all the unhealthy side effects of overexposure to UV rays? Like, you want to be just this dark and not any darker, am I right? Like, what you're trying to say here is that I am the perfect shade, just before it becomes too much. Before it becomes too real for you. Isn't that why you tan all the time? For just that little bit of blackness? Black without really being black. Or white with a little bit of coloring to it — a more "exotic" white. You believe that racism doesn't exist, culturally appropriate even my complexion, and then make me feel as though I am so lucky to have have been born with it. So... thanks.

"Why do all black guys have nice bodies?"

OK, they don't — at least not all of them, and at least not in the way you're defining "nice." And why are you asking me this overgeneralized rhetorical question? I can't answer it, and

your personal experiences with black men have nothing to do with me. There are at least two problems I have with the person who just said this to me:

"Damn, how come you didn't get a black ass, though?"

OK, rude. I'm self-conscious about that. And it's just another question I don't know the answer to. The entertainment industries have really done wonders with this particular stereotype, so much so that anybody who likes big butts doesn't have to lie about it. Hell, they can say whatever they want about it. They can criticize black female artists for getting butt implants, laugh it off when white female artists do, and then live to tell the biased tale — over and over again. They can be disappointed in the oversexualization of twerking until a little white girl does it, because then and only then is it harmless. Like, I'm sorry I can't twerk for you like you think I should be able to, but even if I did, you would probably just make fun of me for doing it. And for your information, my butt is very black. (Just kidding... I know there's nothing much to see there.)

Ah, and my personal favorite. You see, I have always had a thing for eyes, even before I fell in love with my own. (Yes, my vanity is finally showing.) Maybe it's the way rays of sunlight hit them in just the right spots; or maybe it's that I have a more noticeable color than the browns my brothers genetically received; or, maybe it was because they were the first thing I was ever really given the back-handed compliment on, the thing everyone would make a comment on right before asking me the question — the microaggression of all microaggressions: "No, but where are you really from?" And whenever someone asks me this — and believe me, I hear it all the time — I tell them that my mom is Greek, that it's her father who had these irises before me, and they are always, without fail, surprised. Flabbergasted, really.

Isn't it ironic that the most exotic feature I possess is a recessive gene on my white mother's side? And then you have to ask yourself (as I have asked myself many a time): What exactly does it mean to be "exotic?" Is it simply being something different, sticking out like a sore thumb amongst all the perceived normalcy? Or if you want to go the existential route, is the exotic flower still exotic before it's been plucked from its roots and taken away from all its brothers and sisters? Perhaps exoticism is just that: The separation of a thing from its parts; a deconstruction of all those parts from its foundation; and an appropriation of that remaining foundation — a complete and total psychological make-over, a reconstruction of beauty.

I grew up reconstructed. I grew up with the sustained belief that I was exotic; that any beauty I thought I had could only be attributed to that fact; that I was an anomaly that people weren't used to seeing yet and thus would target; that I was appreciated more for my rarity than for my being. There are times that I still believe it, and there's nothing relatively charming about that. So, let's all do me a solid and just refrain from making microaggressions against each other's beauty. Our society's ideals of beauty make it hard enough to appreciate our own prettiness... Why would you want to make it any harder?