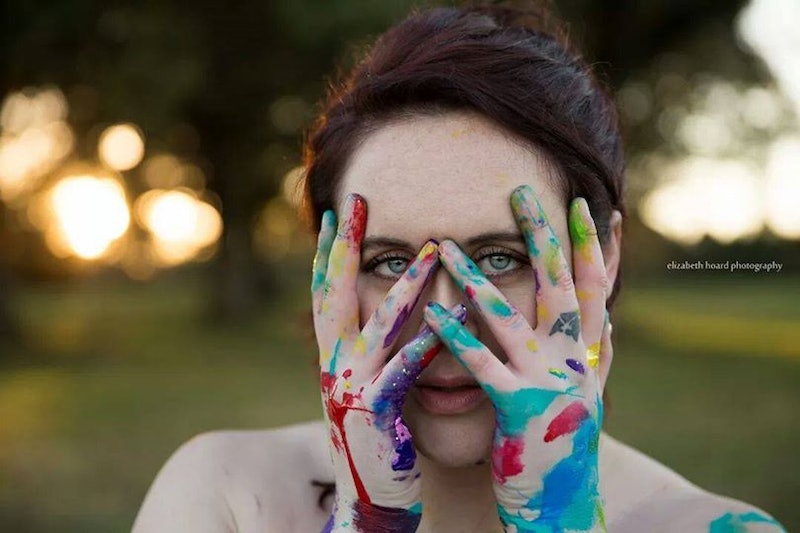 The sad truth is that not all relationships are meant to last — and sometimes, the end of one means calling off a wedding right before it’s scheduled to happen. But when 23-year-old Shelby Swink found herself faced with a cancelled wedding and an ex-fiancé just a few days before they were meant to tie the knot, she handled it in the best way possible: By gathering her parents, her bridesmaids, and her photographer together and staging one of the best photo shoots I’ve ever seen. Swink’s story and the accompanying photos are currently going viral — and with good reason. They’re absolutely amazing, both stunning artistically and inspirational in spirit.

Swink wrote about her experience on Offbeat Bride, a story which was subsequently picked up by BuzzFeed, Mic, and more.. She and her ex-fiancé met in 2011 while they were both at school in Tennessee. During 2012, however, they found themselves trying to make a long distance relationship work; he had moved back to his home state of Florida, while she stayed in Tennessee to finish school. But by 2013, he had moved to Memphis, and in March of 2014 they got engaged and began planning a November wedding.

Five days before what was originally meant to be the wedding date, though, he called the whole thing off. “My fiancé and I sat down and he told me that he was not in love with me, and did not want to marry me, or spend the rest of his life with me,” Swink wrote. She spent the following days calling guests, canceling all the wedding services they had arranged, and working living arrangements. I can only imagine how difficult it must be to make yourself figure out all the logistics when you’ve just had a bomb like that one dropped on you, but somehow she got through it all.

Her family and friends, Swink wrote, couldn’t possibly have been more supportive; as the day itself approached, though, neither she nor they were totally sure what they should do. “I knew that a pity party was the farthest thing from what I wanted or needed,” she said — but when a few people, including (according to BuzzFeed) photographer Elizabeth Hoard, who was originally scheduled to shoot the wedding, brought up the idea of “trashing the dress,” she realized that might be just what she needed. “At first, it sounded crazy,” she said:

“My mother spent so much money on the dress and alterations, so I was nervous to even think about destroying it, let alone try and pitch the idea to her. But after thinking about it, I knew that doing something to mark the occasion was the perfect thing for me. I was not going to let my ex-fiancé’s mistake of letting me go take away my happiness.”

So Swink, her family, and her bridesmaids got all dolled up in their wedding finery, brought a whole bunch of paint with them, and had Hoard capture not a wedding ceremony, but a riotous, colorful, paint-strewn afternoon. The photographs say more about Swink’s strength and the love she and her friends and family share than words ever could, so here — see them for yourselves

In the long run, it’s probably for the best that the wedding was called off. Personally, although I know I, too, would be devastated if it happened, I’d also rather cancel the whole thing before it happened and end the relationship; going through with it and finding out a week, a month, a year later that my partner wasn’t on the same page as me would hurt much, much more. That doesn’t make the situation any less difficult to deal with, though — and all I can say is, would that we all handled such trials as Shelby Swink did. That’s how you do it.

The painted dress is currently on display at Memphis bridal salon The Barefoot Bride; through the beginning of 2015, a portion the proceeds from each wedding dress sold there will go to BeFree Revolution, a non-profit that, according to Swink, “helps other women learn how to find their inner strength.” If you’re in the area, stop by and see it; it’s a piece of art itself now, too. It’s a testament to Swink’s own words: “Always remember to remain true to yourself and believe in your own strength… you can overcome anything life throws at you.”