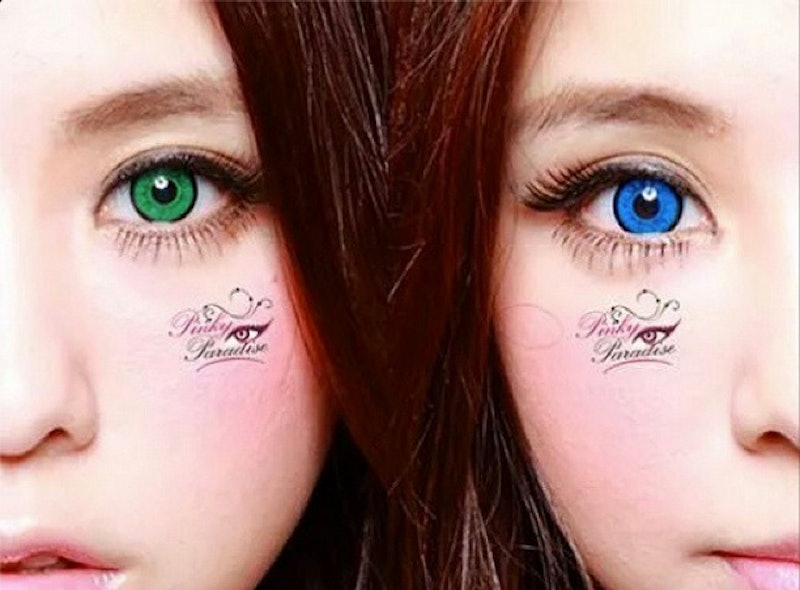 Tons of stateside beauty trends have actually been imports from Asian countries, and there are some amazing innovations that I'm seriously grateful for — notably oil cleansers, skin lighteners, facial mists, hydrating sleep masks, and BB and CC creams — but here's one that I won't be participating in. Circle lenses are a major trend in Asia, and they're essentially contacts that create the illusion of "anime eyes." All together now: what?

The decorative contact lenses are made to give the pupils a larger look and expand the irises to cover more of the whites of eyes. An XOVain writer tried out a pink pair for herself, and while the results weren't totally crazy, they're definitely different. The largest retailer of the product, Pinky Paradise, sells them in 11 colors, including yellow, violet, and black.

The contacts are making a comeback after they hit a surge in 2010, when Lady Gaga sparked the trend by having her eyes digitally enlarged in her video for "Bad Romance." YouTube beauty guru Michelle Phan even made a tutorial on creating the look featuring the lenses.

I admit, I've always been super self-conscious about my tiny eyes, which never fail to disappear in pictures or when I smile. (I've literally had people tell me that I have snake eyes and, yes, Asian eyes.) So although I considered trying these out for a hot second, there are a few things stopping me. They're just a little too over-the-top for my taste, not to mention I've never been able to wear contacts. (Trust me, I want to, but something about my eyes just hates 'em.)

Mostly, though, they're not exactly safe. A 2010 New York Times article pointed out that it's illegal to sell contact lenses in the U.S. without a prescription, whether they're corrective or just for show. In the article, FDA spokeswoman Karen Riley said, “Consumers risk significant eye injuries — even blindness" by wearing the unregulated contacts.

Um, no thank you. I'm out. Even if the risk is relatively small, it all seems a little sketchy to me, and, sorry, but this is my vision we're talking about. Subpar as it is, it's much better than none at all.