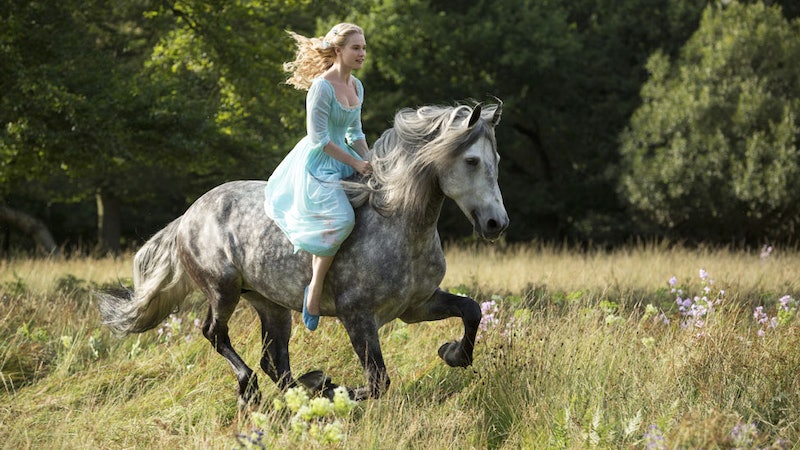 Then again, it's only a photo.

Cinderella doesn't, necessarily, send the best message to young girls out there. If you grin and bear it, if you stay kind and helpful, if you don't speak up, an older person with a wand will show up and help you look pretty enough to catch the eye of a prince. After all, marrying well is the most important thing. Wealth, nice clothes, and a husband will give you the happiness you've always wanted.

The tale dates back to Charles Perrault's version from 1697, yet, some 316 years later, it's still getting air time. The cartoon Cinderella, which I grew up watching, came out in 1950, and featured catchy tunes, adorable mice, and the scariest pumpkin transformation your 7-year-old eyes ever did see. It's message stayed true to form, though — cartoon Cinderelly was nice and all, and sung with birds, but she was still pretty weak.

It will be fun to see how 2015 Cinderella differs from 1950's Cinderella. The film's director, Academy Award-nominee Kenneth Branagh (Jack Ryan, Thor), said in a press release that Lily James's Cinderella "combines knockout beauty with intelligence, wit, fun and physical grace," which, and I might be grasping at straws here, sounds promising. Cind be smart, y'all.

Plus, Cate Blanchett and Helena Bonham Carter are on board —they're the evil stepmother and the fairy godmother, respectively. Our Cate and our Helena wouldn't sign on unless this movie helped to reinvent Cinderella, right?

Just as Kristen Stewart brought some power and intellect to Snow White, here's hoping Lily James will do the same with Cinderella. With this new generation of fairytales comes promise, and so far, we have no reason to believe that Branagh's Cinderella won't deliver a fresh perspective on an old, anti-feminist tale.

Now, if they'd only find room in the remake for Gus Gus — his enthusiasm for, well, everything, likely includes a passion for equal rights.

More like this
15 Offensive AF Jokes In 'Friends' That Really Aren't OK
By Tolly Wright, Bustle Editors and Meguire Hennes
Harry Potter's Viktor Krum Has Undergone A Huge Transformation Since Hogwarts
By Sam Ramsden and Meguire Hennes
Netflix Reveals First Look At Wednesday In The 'Addams Family' Spinoff Series
By Bustle Editors
'Survivor' Is Finally Coming Back To UK Screens
By El Hunt
Get Even More From Bustle — Sign Up For The Newsletter