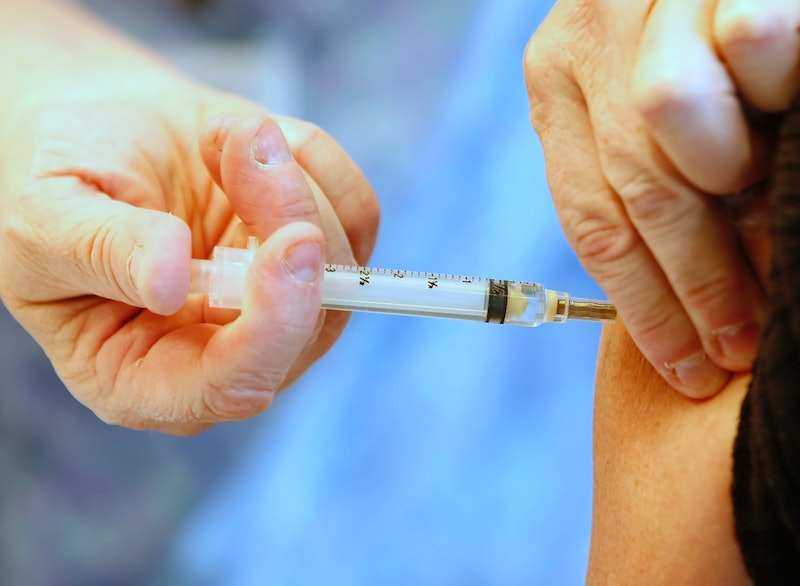 According to the Centers for Disease Control and Prevention (CDC), this year's flu season has officially reached epidemic proportions, The Washington Post reports. Epidemic levels of flu are typical throughout the winter season, but this year's flu may come harder and faster than in recent years, although the official word from the CDC is that it's too early to tell how severe this year's flu season will be. However, the dominant strain of flu this year is H3N2, which has historically led to more severe flu seasons, according to CDC director Thomas Frieden. He says that this vicious strain often leads to more deaths and hospitalizations.

In an emailed statement, the CDC's flu division explained that influenza (flu) surveillance systems are currently showing elevated activity. When 6.8 percent of all U.S. deaths are attributed to pneumonia and influenza, the CDC declares a flu epidemic. This year's flu epidemic was declared slightly earlier than in recent years, Mic reports. Everyone should be cautious, but people over 65 are most likely to end up in the hospital, and those in the southeast of the country are experiencing flu-symptoms in higher numbers than those in other parts of the country. Twenty-two states, including North Caroline, Maryland, Virginia and neighboring states are reporting high levels of flu.

Unsurprisingly, advice from CDC officials is to get vaccinated. Even if you're someone who doesn't normally get vaccinated or is low risk, consider vaccination this year. If you decide not to get vaccinated, take other precautions. The CDC recommends many of the basic public health practices that we should be employing throughout the year, including washing hands frequently, and especially after touching your face. If you experience flu-like symptoms and a fever, stay home for 24 hours after your fever and symptoms are gone, unless you're going out to get medical care (note: fever should be gone without the use of fever-reducing medications). And incase you weren't sure, flu-like symptoms include fever, cough, sore throat, runny nose, vomiting, chills, fatigue, and diarrhea.

The problem with flu vaccinations, however, is that they often become less effective as the virus shifts and changes. CDC officials and other epidemiologists call this a "drift," which they explain is a natural consequence of antigenic shifts (or simply changes in the virus, to you and me). This year the shift happened around March, which was too late to change this year's batch of vaccines. Still, the party line is that we should all get vaccinated. There are multitude strains of flu floating around, many of which we can protect ourselves from with the vaccine.

More like this
11 Surprising Benefits Of Journaling
By Carolyn Steber
What To Know About Taking More Than 1 Piriteze Per Day
By Bustle UK
Michigan’s Governor Is “Going To Fight Like Hell” To Protect Abortion Access
By Andrea Zelinski
The 6 Best Balaclavas To Keep Your Face, Head & Neck Comfortably Warm
By Jenny White
Get Even More From Bustle — Sign Up For The Newsletter