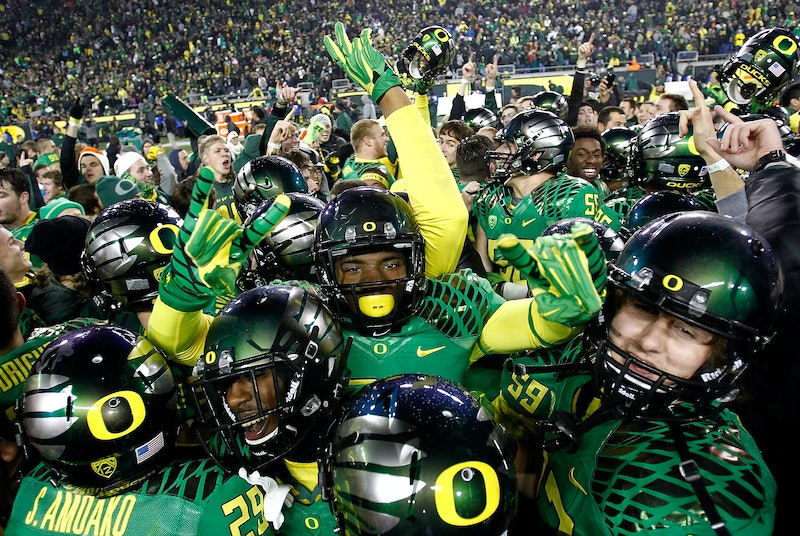 College football and sexual assault collided on-camera following Thursday's Rose Bowl championship playoff game between the Oregon Ducks and Florida State Seminoles. The Ducks routed the Seminoles and starting quarterback Jameis Winston, sealing the team's place in the upcoming national championship game. Several Oregon players then took the celebration further in the post-game ceremony, turning the Seminoles tomahawk chop into an anti-rape chant directed at Winston, who was accused of sexual assault and eventually cleared in a messy, bungled investigation. Now, it looks like the Oregon players will be punished for their consent-affirming cheer, even though, ironically enough, Winston was never suspended or penalized while his alleged assault was under criminal investigation.

Several Ducks players were caught on-camera by Fox Sports West producer Bear Haiser mocking the infamous — and culturally offensive — Seminoles tomahawk chop, changing the chant to "no means no." Given the rape allegation against Winston, and both the university's and the Tallahassee Police Department's well-publicized mishandling of the investigation, it's safe to assume that the Oregon players were targeting their anti-rape chant at Winston.

Not long after videos and Vines of the short-lived consent chant surfaced on the Internet, Oregon head coach Mark Helfrich issued a statement to the Associated Press apologizing for his players' actions, which dejected FSU fans saw as distasteful:

We are aware of the inappropriate behavior in the postgame. This is not what our program stands for, and the student-athletes will be disciplined internally.

It's not like the University of Oregon doesn't have it's own problems with athletics spurring on-campus sexual assault. In June 2014, three players of the Ducks basketball team accused of gang-raping a female undergraduate student were found guilty of sexual misconduct by the school, and barred from returning to campus grounds for up to 10 years. Previously, the three players were suspended indefinitely from the basketball team, though not before the players were allowed to play in the NCAA March Madness tournament.

But the allegations against Winston proved more controversial, because of the university's failure to properly investigate the alleged sexual assault and the Tallahassee Police Department's too-long delay. Winston was accused of rape in early January 2013, about a month after the alleged crime occurred. Tallahassee police requested an interview with Winston then, but the heralded quarterback declined through his lawyer. He also refused to undergo DNA testing or cooperate at all in the case. In February 2013, Tallahassee police inexplicably changed the status of the case from "active" to "inactive," letting the rape kit evidence linger for months.

It wasn't until November 2013, well into Winston's Heisman-winning season, that the case garnered media attention. A frontrunner for the Heisman Trophy at this time, Winston finally caved and underwent DNA testing, and his DNA matched the evidence in the rape kit. On Dec. 5, 2013, Tallahassee police decided not to press charges against Winston, and the case was closed. Winston won the Heisman barely two weeks later.

However, it took nearly two years after the alleged rape occurred for FSU to investigate the case, sparking outrage from anti-rape activists nationwide. Obligated under Title IX, FSU finally held a hearing, in which Winston refused to testify; two other witnesses, both of whom are football players, also failed to testify.

In December 2014, Winston was ultimately cleared of breaking the school's sexual misconduct code.

John Clune and Baine Kerr, Title IX attorneys for the rape victim, said in a statement that they felt "duped" by FSU:

We are stunned and dismayed by the order. It's not a 'decision' at all but a statement that the judge couldn't decide. ... Of the four people in that apartment only one, our client, testified, and she answered any and all questions about what happened. The three football players, Jameis Winston, Chris Casher, and Ronald Darby, all refused to testify and answer questions and somehow Jameis Winston still wins. The Order doesn't even follow the Student Conduct Code, and it ignores the bulk of the evidence.

Over the last year, FSU has come under fire for not only bungling the internal sexual assault investigation, but also failing to discipline Winston during the lengthy probe. Winston was not once suspended or fined during the ordeal, allowing him to go on and win the Heisman Trophy and the 2014 National Championship Game. The only time Winston has been suspended was for yelling "f--k her right in the pussy" while reportedly standing on a table in FSU's Student Union. He received just a half-game suspension.

Were the Oregon players who chanted "no means no" directly in the cameras on Thursday night also taking a feminist stance while taunting Winston? Maybe not — we can never know their true intentions. But if we could turn the tomahawk chop from an offensive display of American whitewashing into an anti-rape screed at college football games — the ultimate harbinger of rape culture among young people — then there's no harm in the Ducks' message. In fact, it's the one college football players and their supports should be sending to the nation.