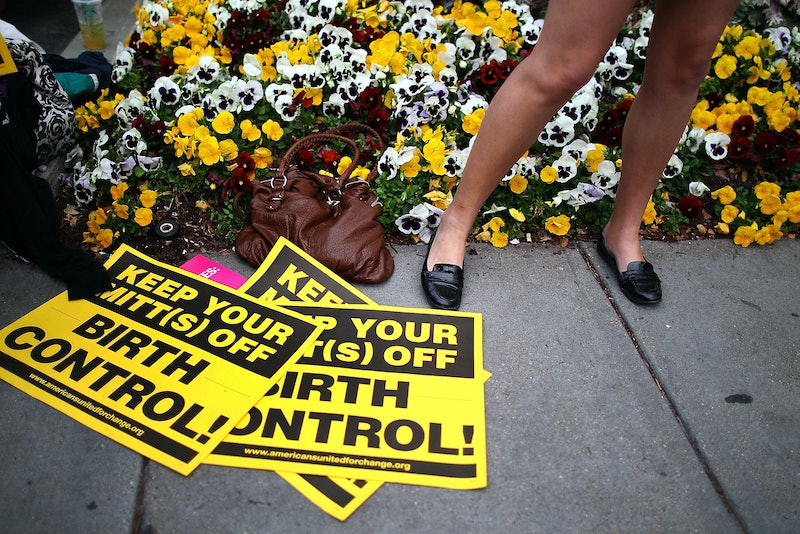 A new paper released Tuesday in the Journal of Family Planning and Reproductive Health says the main hurdle to developing improved birth control methods is — surprise, surprise — politics. The health experts who wrote the paper urged researchers to further embrace and study contraception methods that work after sex, and can be taken only occasionally.

The paper's authors, a group of U.S. and Sweden scientists, say a monthly contraceptive bill is a possibility, and would function similarly to the morning-after pill. Unlike Plan B, which is used within 72 hours of sex, such a pill could be taken after a missed period, or as rarely as once a moth.

“A woman could potentially use a post-fertilization method on a planned schedule only once in each menstrual cycle, no matter how many prior coital acts she had had in that cycle,” wrote the authors.

Current birth control methods are typically designed to work by keeping sperm and eggs apart, but can also be used to prevent pregnancy after an egg is fertilized. This potential alternative offers several advantages to women over existing methods: such a pill wouldn't have to be taken as regularly, and women who experience side effects from hormonal birth control wouldn't have to worry about occurring effects as frequently.

"Every day in clinical practice, at least one woman tells me she has discontinued use of hormonal contraception because 'the pill makes me go crazy!'" Dr. Ellen Wiebe, a clinician and professor of reproductive health at University of British Columbia in Vancouver, who was not involved with the editorial, told LiveScience.

The problem, of course, is the politicians will likely jump to designate the scientifically feasible potential method as abortion. (Never mind that the method would allow fertilization but prevent implementation. Guess what else often impairs implantation? Breastfeeding, which shall henceforth be known as nature's abortion.)

The study's lead author Elizabeth Raymond put it best in a podcast about the study:

The news comes at the same time that a slew of lawsuits surrounding the Obamacare mandate are requiring private companies to offer employees birth control coverage. One case is centered around Hobby Lobby, the company owned by billionaire evangelical Christians, with federal officials asking the Supreme Court to review the government mandate in question. In another, Alliance Defending Freedom attorneys filed a federal lawsuit against the Obama administration on behalf of four Christian universities in Oklahoma.

It doesn't take a reproductive scientist to imagine how trying to push a monthly post-fertilization birth control method in this kind of political climate would turn out.